The suspended ANC secretary-general has accused the NPA of delaying tactics, saying his trial is a political plot 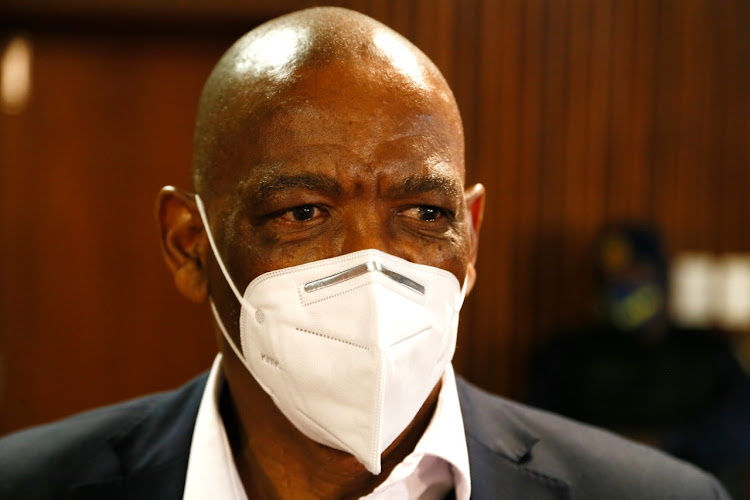 Ace Magashule says he will continue to “walk with and ooze confidence” because the corruption and money laundering charges against him won’t stick.

The suspended ANC secretary-general continued to maintain his innocence outside the Bloemfontein high court on Wednesday, where he appeared with several of his co-accused.

Addressing the media after the matter was postponed, he said: “That’s why I walk with confidence. I ooze with confidence because I will definitely win. And once we win this case, we’ll actually expose the political trial which was actually deliberate to keep Magashule in court, so that you keep him away from the masses of our people.”

His corruption trial was a political ploy to keep him away from his party’s operations, he said.

Magashule appeared in court for the pre-trial process of his corruption trial, in which he, businessman Edwin Sodi and others are accused of corruptly benefiting from a R255m Free State asbestos eradication tender that was allocated during his time as premier there.

The case has been postponed to October 19.

Speaking to the media, Magashule accused the National Prosecuting Authority (NPA) of delaying tactics aimed at ensuring he was kept from running the ANC.

During the proceedings, a tug-of-war played out over whether Magashule’s former personal assistant Moroadi Cholota would testify on his behalf or ...
News
5 months ago

“I’m sure we will give you the indictment and the information they have given to us, and you will clearly see that there is no trial here,” he said.

He complained that he had to take legal action to be granted his full indictment and said he still didn’t know what he is being charged with.

“It is so intentional to keep us busy, [to] keep us in court all the time. We have been saying we are ready and you can see the delaying tactics. They [the NPA] give people information late. In February they said they will give everybody information within two weeks, now it’s what [month]? And if I did not instruct lawyers to go to court, we were not going to get the information.

“I’ve got all the indictments. In terms of the public there is [a] cloud that Magashule is corrupt. I don’t know even the charges because it’s still oversight and the media say 70 counts of corruption, 21 charges of corruption. There is no such.

Magashule faces 21 corruption-related charges, with the NPA accusing him of accepting a more than R1.1m gratification from murdered Ignatius “Igo” Mpambani , who, with Sodi, was awarded the controversial asbestos tender when Magashule was Free State premier.

The NPA alleges that this money was requested by Magashule’s former personal assistant, Moroadi Cholota, on his behalf.

Among other things, the money allegedly went towards the procurement of 400 tablets, tuition for the daughter of former SA Revenue Service (Sars) head of legal Refiloe Mokoena, and travel expenses to Cuba for a Free State provincial government delegation.

The embattled ANC secretary-general maintains he has not taken a “cent from government” and wants South Africans to understand that.