She pledges to ‘foster greater cooperation’ between parties, even though the opposition vehemently opposed her nomination

Former defence minister Nosiviwe Mapisa-Nqakula on August 19 2021 became the fifth woman to be announced as National Assembly speaker since the start of SA's democratic era.

New national assembly speaker Nosiviwe Mapisa-Nqakula has conceded she will have to adjust her outlook to be more effective in her new job after almost two decades in cabinet.

Mapisa-Nqakula made the remarks while delivering her inaugural address to the national assembly on Thursday after her election as the chamber’s new speaker.

The change is on the back of the appointment of Thandi Modise as defence minister, in what amounts to a swap of jobs after President Cyril Ramaphosa’s cabinet reshuffle.

As cabinet minister, Mapisa-Nqakula was a partisan political figure with the responsibility of enforcing policies of her political party in government.

But now the tables have turned. In her new role as speaker, she is constitutionally obliged to be non-partisan by protecting the interests of all parties represented in the house.

Mapisa-Nqakula will also have the job of ensuring cabinet ministers and the president do not make a mockery of their duty to account to parliament. 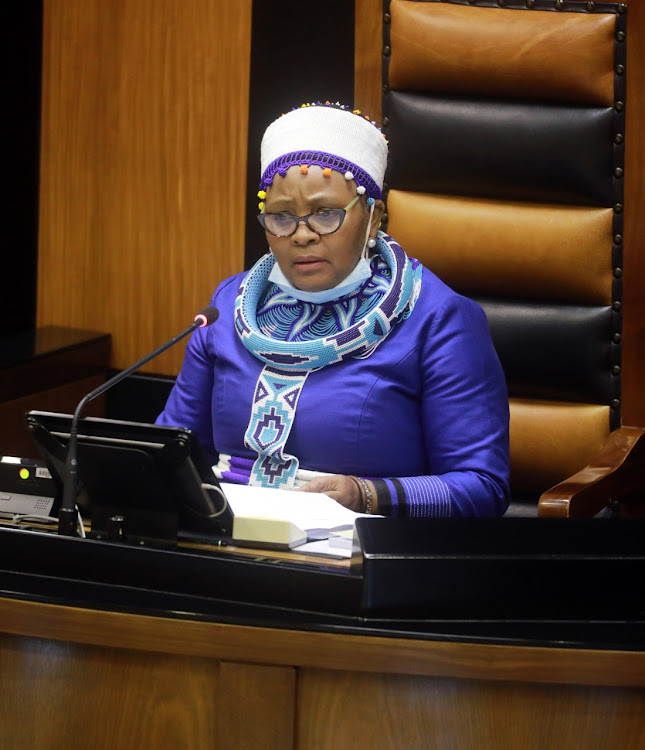 In her maiden speech to MPs after her election, Mapisa-Nqakula acknowledged the transition she had to undergo after a long service in cabinet.

“I return to be part of collective leadership of this national legislature after what can be considered a long stay within the executive branch of government. I therefore fully appreciate the extent of the transition I must personally make to fulfil my obligations and those of this house to ensure accountability and oversight of the executive branch [government],” she said.

Mapisa-Nqakula was elected under controversial circumstances, with virtually all opposition parties rejecting her nomination by the ANC.

The parties argued she was not fit for the position, claiming she was prone to scandals.

The DA said it was stunning that Mapisa-Nqakula was elected to her job despite the parliamentary defence committee’s probe into allegations that she had accepted bribes of about R5m from defence contractors, and spent R7m of taxpayers’ money on chartering luxury flights, receiving gifts of wigs and blowing money on luxurious hotels in Paris and New York.

Mapisa-Nqakula is also facing a potential case of conflict of interest, as parliament was due to conduct an investigation into the defence force, of which she was the political boss, over alleged lapses in the response to the recent public violence in KZN and Gauteng.

Mapisa-Nqakula did not directly address these issues in her speech, but said the authority of parliament would not be “compromised for personal whims”.

“It is important this foundation of true democratic participation should never be compromised for personal whim or for narrow party political interest,” she said, as the DA heckled loudly.

“All our people represented wholly by members deployed from the various political parties in this parliament should always feel that all their interests, however diverse, will have due consideration here, and have the confidence in parliament’s role as the last line in the defence of our hard-earned democracy.”

While most opposition parties opposed her election, Mapisa-Nqakula said she would “foster greater cooperation” with all parties in parliament.

“I extend a hand of cooperation with each member and to each political party represented in this house and pledge to protect the integrity and the mandate of the house, together with each one of you, without fear or favour.”

Mapisa-Nqakula was elected with 199 votes into her new job, defeating DA candidate Annelie Lotriet, who scored 82 votes. There were 17 spoilt ballots.