Poll-axed: South Africans cast their vote on politics by staying at home 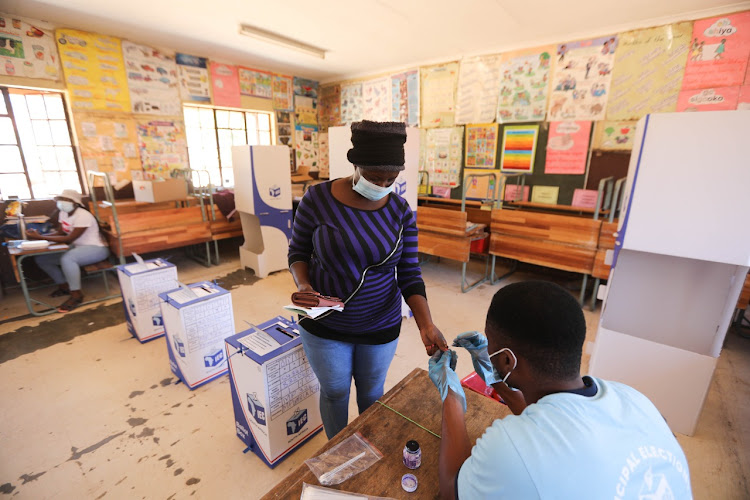 A largely uninspired electorate came out in dribs and drabs on Monday to vote in key local government elections that are likely to see traditional rivals forced to work together across the country.

All eyes will now be fixed on the IEC results centre to see who will take charge of the country’s big metros.

Negotiations between parties to form coalition governments are expected to start soon in metros where no party gets an outright majority. Those likely to see hung councils include Johannesburg, Tshwane, Ekurhuleni and Gqeberha.

On Monday afternoon ANC leaders expressed optimism that the ruling party would fare well in Tshwane and Ekurhuleni, but even they expected a hung council in Johannesburg.

“We certainly campaigned to win and we know we’re doing well in Tshwane. We’re definitely doing well in Ekurhuleni and we’re still waiting for results from other areas, but so far so good,” said ANC deputy secretary-general Jessie Duarte. 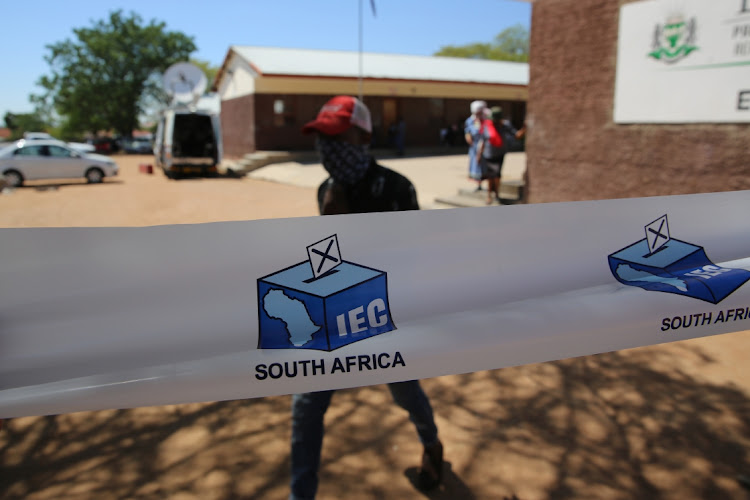 A voting station at a school in Seshego, Limpopo.
Image: Thapelo Morebudi

Despite community protests, bad weather and power outages in parts of the country, the Independent Electoral Commission (IEC) expressed satisfaction with the day’s events.

Let's assume for a moment we are tracking towards 45% turnout overall...

That's 27 million people not participating in the democratic process (!)

According to IEC figures from 6pm Monday, not a single province had yet recorded higher than 29% voter turnout.

It was not smooth sailing in some parts of the country, with tensions breaking out in areas such as Mamelodi East’s ward 93 voting station at Life Giving Ministries, where non-registered voters tried to force their way in.

Tshwane Metro Police and SAPS formed a perimeter around the venue to protect IEC officials and voters as scores of people, who claimed not to have been allowed to register, tried to get in.

In KwaZulu-Natal, 20 voting stations did not open on time because of community protests in Camperdown and Mdloti. The IEC said the stations opened later after security services intervened. It reported that a presiding officer in eThekwini was arrested after allegedly stuffing marked ballots into a ballot box.

“The matter is now in the hands of the police. This incident, which did not affect voting, is a testament to the inbuilt safeguards in the voting process, that also include an active role for party and independent candidate agents,” the IEC said.

Protests also delayed the opening of 19 voting stations, as community members dug trenches to deny IEC staff and voters access to the venues.

The IEC said it filled the trenches with the help of municipalities and anticipated the voting stations would open later.

Inclement weather in Cape Town delayed the opening of more than a dozen voting stations.

IEC Western Cape head Michael Hendrickse said 19 of the province’s 1,577 voting stations did not open on time due to rain in the city. The commission first had to ensure the safety of temporary voting station structures, he said.

“The one impact we have experienced is the weather, and the rain is especially affecting our operations in tents,” said Hendrickse.

“Overall, outside the metro voting is proceeding well. People are turning up, but we are watching the weather closely.”

Hendrickse said rain and wind threatened the stability of 35 IEC tents in the province, mostly in Cape Town.

Some were in areas prone to flooding, mainly Site B in Khayelitsha, Marikana, Philippi East and Macassar.

While there was no load-shedding, power supply disruptions impacted voting in some parts of Limpopo and the Northern Cape, it said. 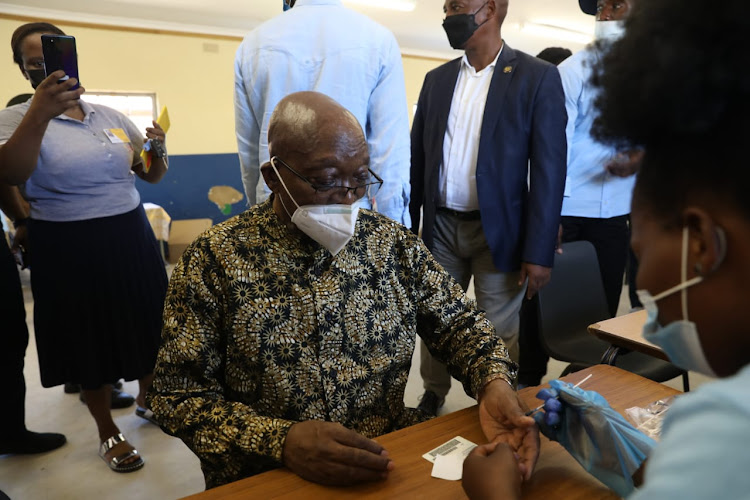 Election day also saw Jacob Zuma out in public for the first time since his release on medical parole in September.

The former president, who has clashed with the ANC leadership, called on party members not to be swayed by political bickering among those jostling for positions of power, adding that it was more important to vote for the ANC.

Zuma was speaking outside Ntolwane Primary School in his ancestral village of KwaNxamalala in KwaZulu-Natal after casting his vote.

“They must not be swayed by individuals as individuals are not important in the ANC, but are important because they become they are part of this organisation,” he said.

Zuma took the opportunity to call on everyone to “go out and vote, voting is very important”.

He reiterated that his vote went to the ANC and that he was happy to have made his mark.

He called on anyone seeking to punish the ANC at the polls by abstaining or voting for another party to “stop that and go vote for the ANC”.

Ramaphosa, accompanied by first lady Tshepo Motsepe, said he was delighted at the culmination of the election campaign.

“It’s been a few weeks of real hard work, but I’m glad many South Africans are seemingly excited to exercise their democratic right.

“I went on my usual walk this morning and a number of people I met in the streets were saying they are on their way to vote, and this was early as 6.30am. There is a great deal of excitement,” he said.

* Sunday Times Daily and TimesLIVE had reporters deployed across the country to capture election day. Read a compilation of the stories below.

The beach, rather than the polls, lured some Durban residents as local government elections got under way on Monday.
Politics
2 months ago

KwaBhaca resident, 119, makes her mark and wants you to do the same

KwaBhaca resident, 119-year-old Nomamelika Emily Philiso, is believed to be one of the oldest people to vote in the local government elections and ...
Politics
2 months ago

The municipal elections have revealed how dissimilar the needs of Capetonians are.
News
2 months ago

DA federal leader John Steenhuisen says the eThekwini municipality could do with a 'good dose of DA government to clean up after the ANC ...
Politics
2 months ago

President Cyril Ramaphosa on Monday said aggrieved South Africans who feel let down by the government have every right to complain.
Politics
2 months ago

Alexandra residents took to the area’s polling stations early on November 1 to cast their votes in the municipal elections. Many said they are ...
Politics
2 months ago

Road closures, locked gates, trenches and a voting station break-in were some of the incidents that hampered the electoral process in KwaZulu-Natal ...
Politics
2 months ago

Residents in Nyanga hope their votes in the 2021 municipal elections will help win the fight against crime in the Cape Town township.
Politics
2 months ago

'The ANC has destroyed our infrastructure. We've got to unseat them.'
Politics
2 months ago

“I have voted all my life, but not now. I am tired of all the stealing of public money while we suffer.”
Politics
2 months ago

Hot contestation between ANC and EFF in Seshego

RDP houses, the R350 social relief of distress grant and food parcels are the reasons some residents in Boikhutso township outside Lichtenburg, ...
Politics
2 months ago

The community of Emaphupheni, near Daveyton on the East Rand, have shut down a voting station as they protest about a lack of service delivery.
Politics
2 months ago

‘I don’t know who I must choose’: voting in major areas in Ekurhuleni off to a slow start

Voting stations in Katlehong, Thokoza and Vosloorus in Ekurhuleni experienced a slow start on Monday morning with fewer voters queueing to cast their ...
Politics
2 months ago

For Amos Kabinde, a resident in Mamelodi East ward 93, voting for change and a party which could deliver services was the motivation to join the ...
News
2 months ago

Voters braved driving rain to turn up in dripping numbers at polling stations in Cape Town’s "deep south" on Monday.
Politics
2 months ago

Eastern Cape kings have urged their subjects, particularly those in rural communities, to go out in numbers to cast their votes — and only vote for ...
Politics
2 months ago

Deep distrust, apathy, wariness and weariness - the mood in Thembisa, Ekhuruleni, on election day is palpable.
Politics
2 months ago

'I wish he was here': Mabopane residents vote in the shadow of murdered councillor Tshepo Motaung

In Mabopane, the hometown of slain ward 22 councillor Tshepo Motaung, resident Monika Mokome, 81, said all she wanted was a house.
Politics
2 months ago