Senior EFF insider explains why party voted for the DA in SA’s metros, a decision which ‘surprised’ Helen Zille 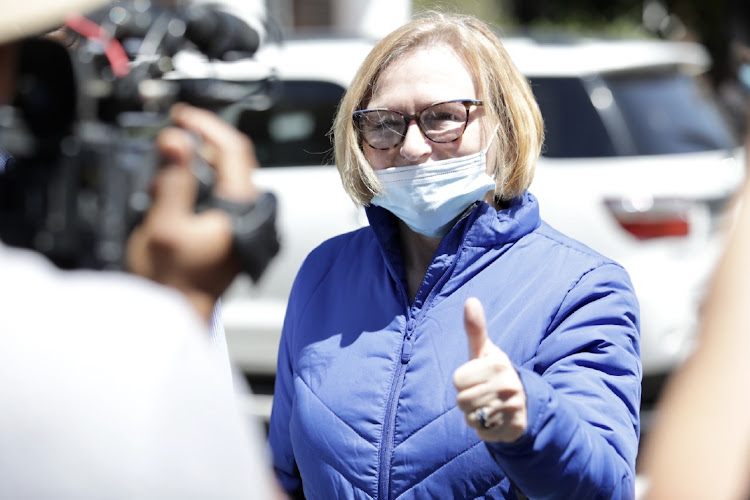 SURPRISED, BUT STOKED The DA’s federal chairperson Helen Zille said on Monday she was 'very surprised' the EFF voted with her party's candidates in key metros, giving them the mayoral chains.
Image: Esa Alexander

The ANC had the rug pulled out from under it in Gauteng metros on Monday, as the EFF effectively “imposed itself” on the DA.

A senior EFF leader said the party established a strategy to remove the ANC from power by siding with the DA, even though the opposition formations had not gone into any type of partnership or formal coalition.

“We are not voting for DA, we are disrupting the ANC. That’s what we are doing,” said the EFF insider on Monday evening. “We don’t want anything for ourselves. We just want to deal with the ANC arrogance.”

DA federal council chairperson Helen Zille said they were “very surprised” the EFF had voted with them in Johannesburg and Ekurhuleni.

The inaugural council meeting in Tshwane will only sit on Tuesday, but many expect a similar pattern to emerge.

We don't want anything for ourselves. We just want to deal with the ANC arrogance.

In Ekurhuleni, where the ANC was the leading party after the November 1 vote, it was the DA that got the coveted mayoral chains.

The writing was on the wall earlier for the ANC, with the DA’s Raymond Dlamini elected as speaker, seemingly with the EFF’s help. Dlamini received 116 of the 222 votes cast, winning over ANC candidate Dorothy Mlambo, who received 104 votes.

And the pattern repeated itself in Johannesburg. Thanks to Action SA and the EFF, the DA ended the evening in total control of the city. This after Mpho Phalatse emerged victorious against outgoing Mpho Moerane of the ANC. Phalatse thumped Moerane by 23 votes to become the first female mayor of the country’s economic hub. That concluded the DA’s takeover after a win for the position of speaker by 29 votes, with the DA’s Vasco Da Gama emerging victorious against Eunice Mgcina.

Action SA leader Herman Mashaba said the DA had him and the EFF to thank for its win, which he promised would be repeated in Tshwane on Tuesday. "There’s been discussions between us and the EFF to say, let us support the DA and see what happens.

"What was important to us was to make sure that we do not have an ANC government in all three Gauteng metros.

"We agree with the EFF that we will not allow the DA to give this municipality to the ANC. We are proud of our achievement now that we’ve removed the ANC from government, not only in Johannesburg, but in Ekurhuleni too, and we will do it in Tshwane.

The EFF insider, with extensive knowledge of the situation, explained further.

“We are not going to vote for an ANC that is going to give the Patriotic Alliance MMC [member of the mayoral committee] positions. The DA, with its racism, would rather take over,” the person said, on condition of anonymity.

“We are playing our political game. We are imposing ourselves on her,” the insider said.

The ANC has failed to retain control of Ekurhuleni metro after Mzwandile Masina was trounced by the DA’s Tania Campbell.
Politics
1 week ago

The source accused the ANC of conniving with the IFP by saying the EFF was the biggest threat to both parties, and that they needed to come together to stop the EFF.

“We went to them and spoke to them nicely, and they said: ‘We don’t need you.’ They said the EFF is the biggest threat, which must be stopped,” the person said.

The powerplay also had consequences outside Gauteng.

The insider revealed that the IFP had sided with the EFF in eThekwini and Newcastle. In the former, the inaugural council meeting ended prematurely after a power failure at the venue. As a result, its business of electing office bearers was not concluded. In Newcastle, the ANC lost to the IFP.

At about 6pm, a mob, apparently ANC supporters, stormed the eThekwini meeting and disrupted proceedings. It left about 15 minutes later. The municipality said it was investigating how security controls were breached.

While the speaker, Thabani Nyawose of the ANC, made it through without the help of the IFP, when the time came for the election of the rest of the officials, including the mayor, cracks between the IFP and ANC agreement on governance in hung councils were so visible that the latter’s councillors found every excuse to delay the proceedings.

The ANC NEC had decided it would field Mxolisi Kaunda as the party’s mayoral candidate.

The ANC-IFP agreement stated that the parties would not contest each other in municipalities where one held the majority of seats. But that agreement broke down and the IFP no longer backed the ANC, meaning the party was on the brink of losing control of the east coast metro.

In Newcastle, where the ANC had 22 seats and the IFP 18, the latter voted with other parties, including the DA, and was able to take the municipality, leaving the ANC in the lurch.

In KwaNongoma, where the IFP had a majority, it teamed up with the EFF, getting the mayoral position. The EFF got the deputy mayor position.

The IFP previously said it would not work with the ANC.

The EFF insider said of Newcastle: “We went there and changed direction with the locals and the locals defied leadership and voted for an IFP man.”

Well it is clear that they must be voting for us, otherwise we wouldn’t be getting these results

Speaking on Monday evening, Zille said there were no discussions about the EFF giving its votes to the DA.

“Well it is clear that they must be voting for us, otherwise we wouldn’t be getting these results,” she said.

Zille was, however, adamant the party would not rely on the EFF and would be able to govern and pass budgets without it.

“We can get a clear majority without them,” she said.

Another DA leader, who opted to remain anonymous, said they were “shocked” by the voting trends.

“Absolutely no idea. It’s coming as a shock where it’s happening,” the insider said.

Earlier on Monday in Nelson Mandela Bay, the ANC formed a minority government, with the party taking the mayor’s chair.

Only 119 councillors voted, as DA MPL Retief Odendaal, listed as a PR candidate councillor on the IEC list, was absent.

Johnson was voted in with the help of a bloc comprising GOOD, Abantu Integrity Movement (AIM), UDM, Defenders of the People (DOP), Northern Alliance and PAC. The bloc has a combined 10 seats in the council, while the ANC has 48. The Patriotic Alliance has two seats and has partnered with the ANC nationally.

He was up against DA councillor Rano Kayser, who got 59.

The DA’s decision to reject a proposal that would have seen Action SA’s Herman Mashaba return as Johannesburg mayor, places coalition talks in ...
Politics
1 week ago