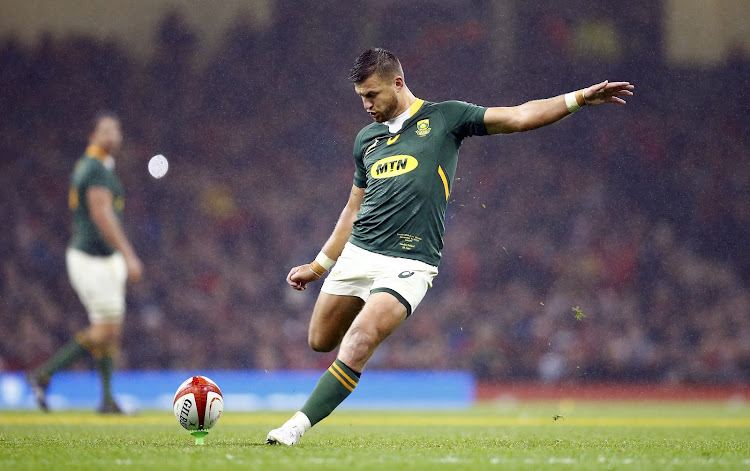 IN CONTENTION Flyhalf Handre Pollard should be in the selection mix for the second Test in Bloemfontein against Wales.
Image: Steve Haag/Gallo Images

In the aftermath of SA’s 32-29 win over a fire-breathing Wales at Loftus Versfeld in the first Test, much of the talk will turn to whether the Boks can be caught that cold in the second.

That, of course, is joined at the hip with the question as to whether Wales can again summon the courage, bloody-mindedness and sheer physical grunt to confront the Springboks with as much lustre in next weekend’s second Test in Bloemfontein.

The Boks may argue they last played seven months ago, and that they had heavy hitters Handré Pollard, Duane Vermeulen and Pieter-Steph du Toit missing from their line-up. Still, they were disconcertingly far off the pace in a first half in which Wales kept them in check through resolute defence and a well thought-out and precise kicking game.

The Boks, by contrast, failed to find the field position they craved in that first half, their forwards were being chopped at the knee, leaving their backs not much room to manoeuvre as they ran into the embrace of the first Welsh defender.

To make matters worse, flyhalf Elton Jantjies was off radar and will now likely make way for Pollard in the second Test. To be fair, with the Bok pack struggling to get onto the front foot Jantjies was never going to find the space and time to deliver his tightrope offload game.

Pollard will bring more directness, if not thrust to that position but the Boks may need to tinker up front as well.

They were also blunted at the breakdown and a slight reconfiguration may be required for the second Test. They opted for Franco Mostert’s strong carrying and line-out ability but they may need a player more skilled at wreaking havoc at the ruck. Elrigh Louw, who made his debut off the bench in Pretoria, contributed richly to the Bok second half comeback. So too did Malcolm Marx, who is also a proficient ball poacher.

Du Toit is expected to be ready available for selection but having been so long on the sidelines he may be eased into the thick of things.

We’ve got a plan. Obviously we have to look at injuries and performance. If you look at the second half that was pretty much the kind of performance we are looking for, not the first half.

The Boks are likely to face similar conditions in Bloemfontein as they did in Pretoria and may have to look at their second half performance in the capital as their guiding light for this weekend’s selection.

Coach Jacques Nienaber was loath to say whether they were able to glean more from the first or second half in the first Test.

“We’ve got a plan,” he said reassuringly. “Obviously we have to look at injuries and performance. If you look at the second half that was pretty much the kind of performance we are looking for, not the first half,” he said.

Wales too have to find improvement. They will try to repeat what they did in the first half but they will have to be more disciplined when on the back foot. Some of the yellow cards they copped were at the soft end of the scale but that’s part of the baggage that follows touring teams.

They will certainly have to make amendments to their match day team. Tighthead prop Tomas Francis took a knee to the head when he attempted a low tackle and was knocked out.

“He’s OK in the changing room,” said coach Wayne Pivac. “He will go through the normal protocols. I would think he will definitely be out of the second Test, and we will have to wait and see whether he is available for the third.”

Losing Francis will be a huge blow. Wales splendidly rose to the occasion at Loftus by matching the Boks’ physicality up front and they knocked the hosts out of their stride by getting under their skin.

Much of this was directed through captain Dan Biggar, who spent much of the afternoon bickering with anyone not clad in red.

He explained that Wales was never going to take a step back and that it was their duty to be confrontational and meet the Boks head on.

He spent a lot of time in the ear of Cheslin Kolbe and Georgian referee Nika Amashukeli who dismissed four Welshmen, including Biggar with yellow cards.

“We’ve got to look at ourselves first,” said Biggar. We gave some easy ins and some easy decisions. It’s difficult to say too much when you’re quite emotional. Some felt a bit harsh but conversely when you give SA an in, it’s hard to stop and it’s probably hard to referee then.”

Much of Wales’ effort was embodied by the wholeheartedness of Biggar but in the end he probably tried too hard.

Much like Ronan O’Gara in what proved to be the deciding second Test against the British and Irish Lions at the same ground in 2009, the visiting flyhalf conceded a soft penalty that handed the Springboks victory at the death.

Amashukeli awarded the home team a penalty after Biggar’s hand interrupted the path of a pass but the captain talked down his culpability.

“That’s a tough one. I thought the penalty was harsh. The ball’s hit my hand rather than me slapping it down,” explained Biggar.