Blast from the past: Bafana blow away Pharaohs in Cairo 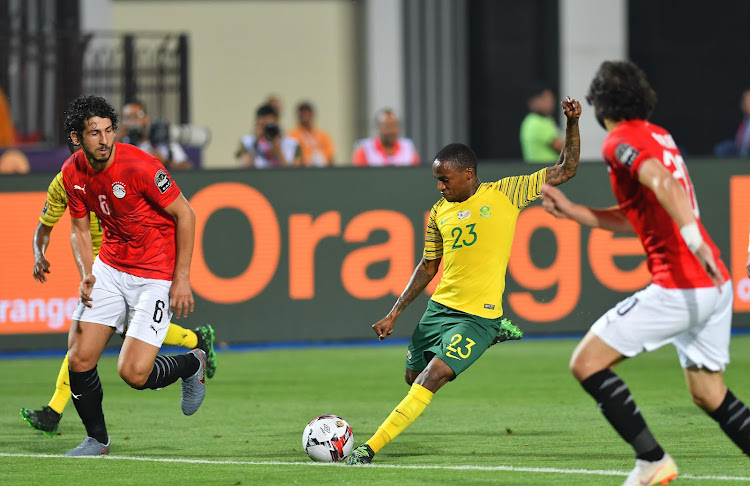 POT SHOT Bafana Bafana goalscorer Thembinkosi Lorch has a shot on goal during the 1-0 African Cup of Nations, Last 16 win over Egypt in Cairo in 2019.
Image: Ahmed Hasan/Gallo Images

2000 — SA’s bid to stage the 2006 World Cup ends in heartbreak when Germany is awarded the showpiece by a single vote, at 12-11. New Zealand’s Charles Dempsey, the 78-year-old head of football in Oceania, was expected to vote for SA in the final round, but abstained instead at the Fifa executive ballot in Zurich.

2000 — The Proteas line-up collapses for 62 runs — their last six wickets falling for 20 — as they lose to Sri Lanka by 37 runs in an ODI in Galle. Chasing 250 for victory, openers Gary Kirsten (59) and Andrew Hall (81) gave them a good foundation, putting on 150 for the opening partnership. They were all out for 212 in the match, part of a triangular series also featuring Pakistan.

2002 — The Springboks beat Samoa 60-18 at Loftus Versfeld, but they concede three tries, their most to date against the Pacific Islanders. Centre De Wet Barry and winger Dean Hall each dot down twice as the home side amass eight five-pointers in total. But the defence was left wanting with eighthman and captain Semo Sititi, centre Freddie Tuilagi and flanker Kitiona Viliamu getting over the line.

2014 — Hashim Amla scores 109 to steer the Proteas to a 75-run victory over Sri Lanka in the first ODI in Colombo. Spinner Imran Tahir took three wickets and Dale Steyn, Morne Morkel and Ryan McLaren two each as SA bowled out the hosts for 229.

2019 — Thembinkosi Lorch scores in the 85th minute as Bafana Bafana stun hosts Egypt 1-0 in their Africa Cup of Nations last-16 match in Cairo. SA had advanced to the knockout stages of the tournament as the fourth-best third-placed team after winning just one group match.

2019 — The Proteas play their ninth and final World Cup group match in Manchester knowing they cannot advance to the knockout stages, but they have the satisfaction of beating high-riding Australia by 10 runs. Captain Faf du Plessis scored 100 from 94 balls and Rassie van der Dussen 95 to steer SA to 325/6. Kagiso Rabada takes the key wickets of Usman Khawaja (18) and Mitchell Starc (16) in the 49th over to secure what was only the Proteas’ third win of the tournament.

2019 — Tatjana Schoenmaker wins the 100m breaststroke gold at the World Student Games in Naples in 1 min 06.42 sec, slightly slower than the 1:06.32 SA record she clocked in the semifinals the previous day.