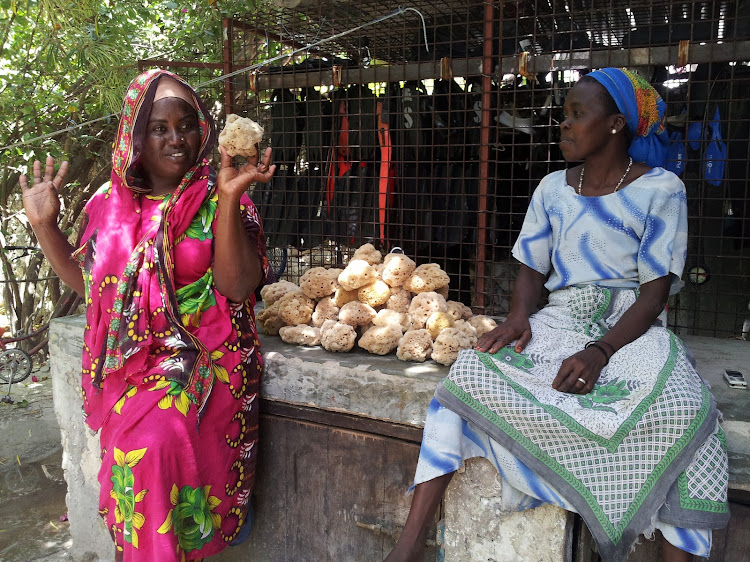 Nasir Hassan Haji never thought of herself as a farmer or a swimmer, but as she waded into Zanzibar’s blue waters with goggles pulled over her headscarf to examine her floating sponge farm, she realised she had surprised herself by becoming both.

Alongside 12 other women in Jambiani village on the Indian Ocean coast, Haji has come to rely on the climate-resilient, natural sponges bobbing on thick ropes where they grow for months before the women harvest, clean and sell them to shops and tourists.

“I learned to swim and to farm sponges so I could be free and not depend on any man,” Haji said later, sitting on the floor in her home on the Tanzanian island.

Before farming sponges – which resemble a white, textured rock but are actually simple, multicellular animals – Haji cultivated seaweed, until increasing ocean temperatures fuelled by global warming made it difficult to grow her cash crop.

Haji and other women dependent on the ocean for their livelihoods – from seaweed farming to fishing and tourism – have seen warmer, rising seas threaten their work, but they are adapting by finding ways to diversify what they do to get by.

Local conservationists say this has become even more urgent as Covid-19 travel restrictions around the world have stalled the flow of tourists to the tropical holiday destination, forcing islanders to look to nature to eke out a living. 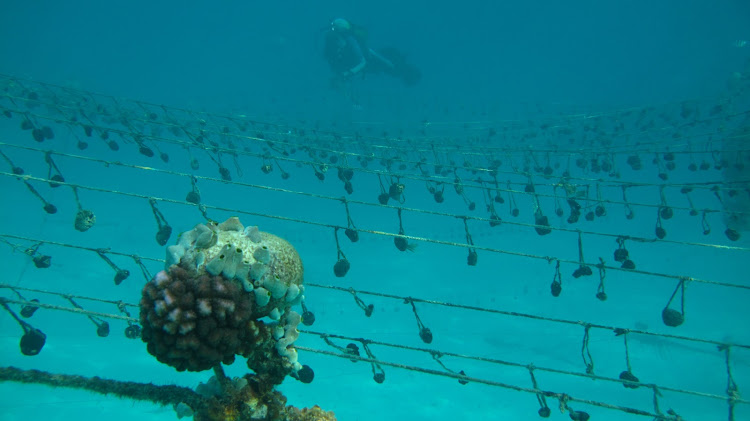 A scuba diver goes underwater to check up on the hanging sponge farm in Jambiani, Tanzania.
Image: Marinecultures

“We are seeing people who relied on tourism now turning to fishing or cutting wood from the forests ... It is a tug of war between economics and the environment,” said Mohamed Okala, a conservationist and tour guide from Jambiani.

Locals say they have already seen fish stocks deplete over the past year. But for women like Haji, sponge farming has acted as a buffer against the climate and economic shocks the island has endured.

“I am building my own house and educating my children,” said the single mother of four, aged 46, as she went to stir a pot on a nearby fire. “Women were left behind before, but now that is changing.”

Sea as a friend

Research by the State University of Zanzibar shows that more than 90% of seaweed farmers on the island are women, and that they have seen changing water temperatures, rainfall patterns and ocean salinity hit production in recent years.

Using data that show Zanzibar warming over the past 40 years, a 2012 study from the Global Climate Adaptation Partnership and Britain’s former department for international development projected the island’s average maximum monthly temperature would rise by 1.5°C to 2°C by the 2050s.

The women seaweed farmers typically sell their produce to middlemen who export it to countries like Denmark, Vietnam, France and the US where it is used as an emulsifying agent in creams, soaps and foods. 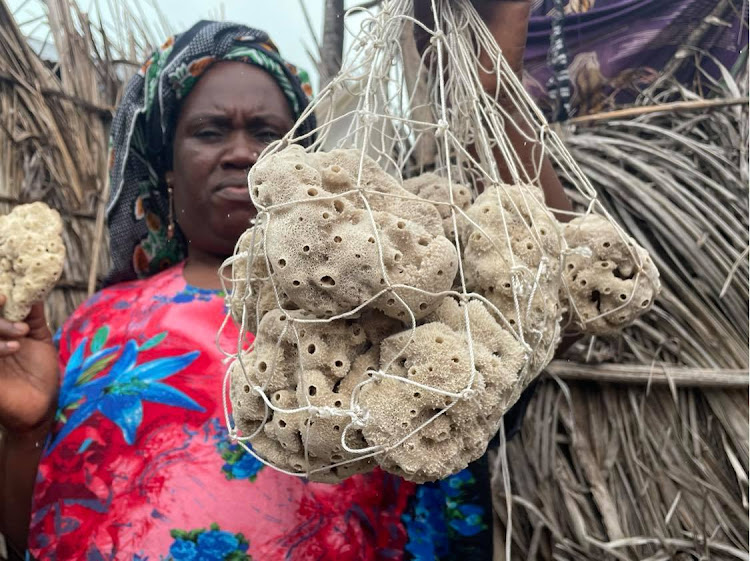 Nasir Hassan Haji holds up her harvested sponges in a bag from her home in Jambiani in Zanzibar, Tanzania.
Image: Thomson Reuters Foundation/Kim Harrisberg

Haji had farmed seaweed since she was a young girl until six years ago, when a friend told her the environmental charity marinecultures.org was teaching women to swim and farm sponges that could be used for cleaning and bathing.

Since 2009, Christian and Connie Vaterlaus, the charity’s Swiss founders, have collected sponge particles from around the island to grow in their nursery, which became the launch-pad for burgeoning sponge farms.

“I met someone in Micronesia who was sponge farming and I saw the benefits of bringing this idea to Zanzibar,” said Christian Vaterlaus, as he looked out at the ocean from his Jambiani office, noting there are only a few sponge farms in the world.

The sponges, he said, are more resilient to a shifting climate than seaweed, need less maintenance and sell at higher prices to hotels and tourists, offering an eco-friendly alternative to synthetic sponges.

The sponges also filter and feed on particles in the water and provide an alternative to overfishing, easing strain on the coastal ecosystem.

The 13 women farming with the help of marincultures.org are growing about 1,500 sponges, and the charity trains about four additional women each year.

In a good month, the farmers can sell 10 to 20 sponges for up to $20 each, said Vaterlaus – and in the process he has seen some of the women become conservationists. 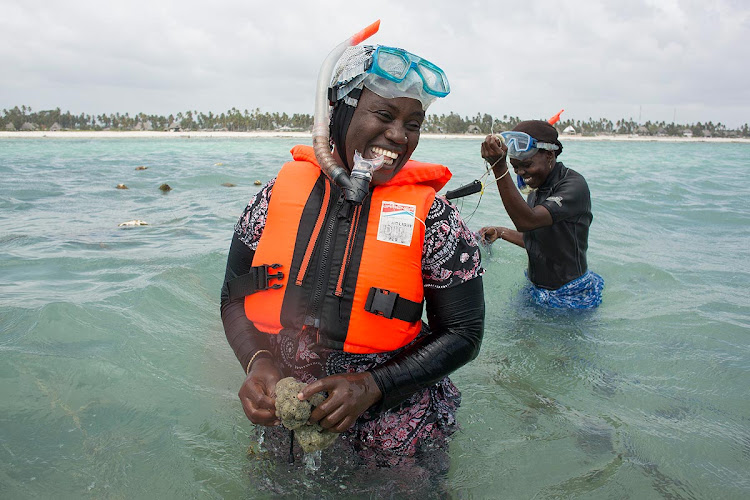 Nasir Hassan Haji smiles as she snorkels among her sponge farm in Jambiani, Zanzibar.
Image: Marinecultures

“When people realise that farming the sea is more sustainable than overfishing it, (the sea) is seen as a friend that provides you with a living and it is important to protect it,” he said.

But maintaining demand has been tricky, he added, especially when Covid-19 hit, slashing the number of tourists to the island.

The sponges are only sold locally for now to minimise costs and push a larger share of the revenue to the women farmers, said Vaterlaus.

“These are overpopulating as our fish species – which eat and control the urchins – become more threatened,” said Okala, the local conservationist, carefully watching his step to avoid standing on one of the prickly invertebrates.

In small numbers, the urchins are essential to coral health. In excess, they can inhibit coral growth, he explained.

“The balance has been upset ... If we keep fishing to feed our stomachs today, we will have nothing left tomorrow,” he said.

Aware of this looming risk, marinecultures.org is also focusing on coral reef rehabilitation and efforts to regulate fishing zones and use techniques that give certain species, such as octopus, a chance to recover.

But such initiatives only work in the right conditions.

The sponges, for example, do not grow in the south of the island, possibly because sea temperatures there are cooler, Vaterlaus said.

But his charity is expanding sponge farming into environments similar to Jambiani, in both Madagascar and Tunisia.

“We don’t really understand what is coming when it comes to climatic changes, but we have to be optimistic and we need to try to adapt now, while we still have a chance,” he said.