In this debut collection, feminist and Khoisan activist Kelly-Eve Koopman grapples with the complex beauty and brutality of the everyday as she struggles with her family legacy. Join the author in conversation with Haji Mohamed Dawjee at the Book Lounge on August 7 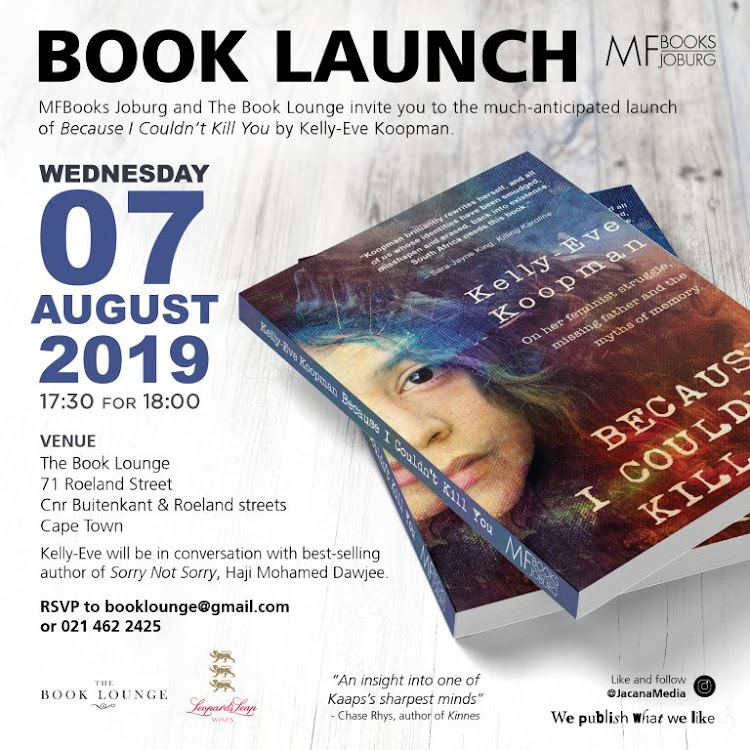 In the shattered fantasy of rainbow-nation SA, there are many uncomfortable truths. Among these are family secrets - the legacies of traumas in the homes and bones of ordinary South African families.

In this debut collection, feminist and Khoisan activist Kelly-Eve Koopman grapples with the complex beauty and brutality of the everyday as she struggles with her family legacy. She tries unsuccessfully to forget her father - a not-so-prominent journalist and anti-apartheid activist, desperately mentally ill and expertly emotionally abusive - who has recently disappeared, leaving behind a wake of difficult memories.

Mesmerisingly, Koopman wades through the flotsam and jetsam of generations, among shipwrecks and sunken treasures, in an attempt at familial and collective healing.

Sometimes tragic, sometimes hilarious, she faces up to herself as a brown, newly privileged 'elder millennial', caught between middle-class aspirations and social justice ideals. An artist, a daughter, a queer woman in love, she is in pursuit of healing, while trying to lose those last five kilogrammes, to the great disappointment of her feminist self.

Article provided by MFBooks Joburg, an imprint of Jacana Media

Artist's work focuses on the 'erasure of womxn & queers' from history

"What we have to say is important and we have every right to say it, so let's fight for it together"
Books
1 year ago

This collection demonstrates the diversity and remarkable literary achievements of black women.
Books
1 year ago

Why are boys allowed to climb trees while girls have to play with dolls and tea sets? This extract from ‘Reflecting Rogue: Inside the Mind of a ...
Lifestyle
3 years ago
Next Article