Joburg launch of 'The Stellenbosch Mafia' by Pieter du Toit, on August 6

Who are the group of mega-wealthy white Afrikaans men known as the 'Stellenbosch Mafia', and what power do they exert over South Africa? Head to Exclusive Books, Hyde Park on August 6 to find out... 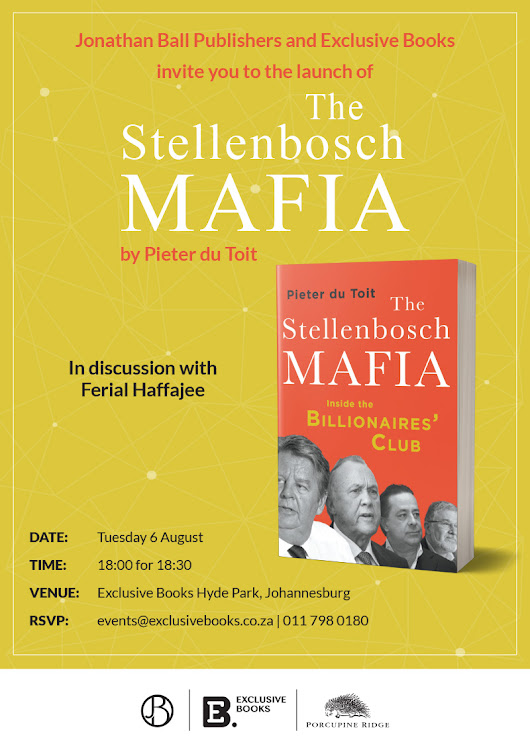 Ferial Haffajee will be in conversation with author Pieter du Toit at the Johannesburg launch of 'The Stellenbosch Mafia'.
Image: Jonathan Ball Publishers

About 50km outside Cape Town lies the picturesque town of Stellenbosch, nestled against vineyards and beautiful mountains.

This is where some of South Africa’s wealthiest individuals reside: all male, all Afrikaans – and all stinking rich. Johann Rupert, Jannie Mouton, Markus Jooste and Christo Wiese, to name a few.

EFF leader Julius Malema scathingly refers to them as “The Stellenbosch Mafia”, the very worst examples of white monopoly capital.

But who exactly are these mega-wealthy individuals, and what influence do they exert, not only on Stellenbosch, but on South African society as a whole?

Author Pieter du Toit begins by exploring the roots of Stellenbosch, one of the wealthiest towns in South Africa and arguably the cradle of Afrikanerdom. This is the birthplace of apartheid leaders, intellectuals, newspaper empires and more.

He then closely examines this “club” of billionaires. Who are they and, crucially, how are they connected? What network of boardroom membership, alliances and family connections exist? Who are the “old guard” and who are the “inkommers” (newcomers), and what about the youngsters desperate to make their mark?

He looks at the collapse of Steinhoff: what went wrong, and whether there are other companies at risk of a similar fate. Du Toit also examines the control these men have over cultural life, including pulling the strings in South African rugby.

Du Toit is a political journalist and has held senior positions at a number of Afrikaans titles, including political correspondent and news editor at Die Beeld in Johannesburg. In 2017 he was appointed editor of Huffington Post South Africa. He has covered politics for more than a decade.

Hefty bill to fix up Steinhoff

Company reports it spent R1.2bn on advisers in six months
Business
1 year ago

Steinhoff seeks to recoup payments made to ex-CEO

Final Steinhoff payments to Wiese down to a trickle, relatively

Steinhoff's latest results reveal a loss of €1.2bn that prompted the resignation of long-time CEO Markus Jooste and sent the company's share price ...
Business
1 year ago

Steinhoff-Wiese: who needs to cough up?