Launch of 'The Cape Radicals' by Crain Soudien on September 18 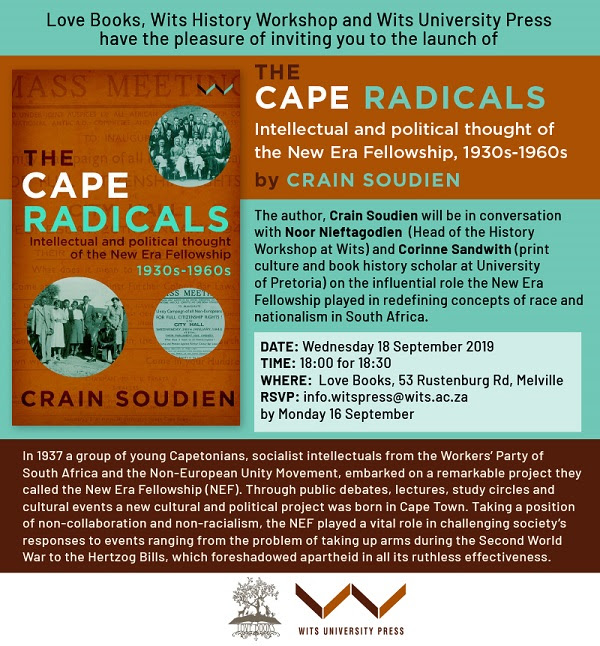 In 1937 a group of young Capetonians, socialist intellectuals from the Workers’ Party of South Africa and the Non-European Unity Movement, embarked on a remarkable public education and cultural project they called the New Era Fellowship (NEF).

Through public debates, lectures, study circles and cultural events a new cultural and political project was born in Cape Town. Taking a position of non-collaboration and non-racialism, the NEF played a vital role in challenging society’s responses to events ranging from the problem of taking up arms during the Second World War for an empire intent on stripping people of colour of their human rights, to the Hertzog Bills, which foreshadowed apartheid in all its ruthless effectiveness.

The group included some of the city’s most talented scholar-activists, among them Isaac Tabata, Ben Kies, A C Jordan, Phyllis Ntantala, Mda Mda and members of the famed Gool and Abdurahman families. Their aim was to disrupt and challenge not only prevailing political narratives but the very premises – class and race – on which they were based.

By the 1950s their ideas had spread to a second generation of talented individuals who would disseminate them in the high schools of Cape Town. In time, some would exert their influence on national politics beyond the confines of the Cape.

Among these were former minister of justice, Dullah Omar, academic Hosea Jaffe, educationist Neville Alexander and author Richard Rive. This book is a testament to how the NEF was at the forefront of redefining the discourse of racialism and nationalism in South Africa.