Launch of 'Betrayal' by Jonathan Ancer on Thursday

Cape Town! Journalist, cruciverbalist and double-agent doyen Jonathan Ancer is launching his new book in the company of Tom Eaton at the Book Lounge 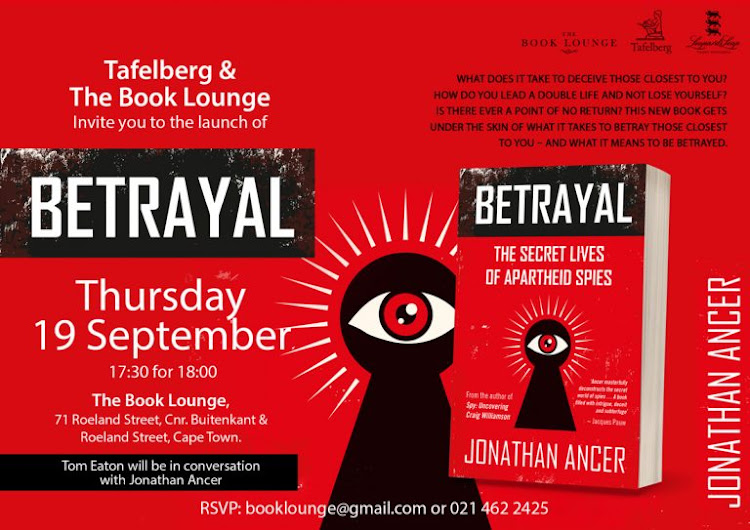 What does it take to deceive those closest to you? How do you lead a double life and not lose yourself? Is there ever a point of no return?

These are the themes, among others, that Jonathan Ancer explores as he tells the tales of some of SA's most unusual and successful spies: from the navy super-spy on Russia's payroll to the party girl who fell in love with Cuba, from the accidental mole in the heart of Pretoria's war on the “frontline states” to the idealistic students used and abused in apartheid’s intelligence war.

Their journeys into the shadow world of espionage raise questions about conscience, trust, forgiveness and the very notion of truth in a country that was at war with itself.

From the author of Spy: Uncovering Craig Williamson, this new book delves deep into what it takes to betray those closest to you — and what it means to be betrayed.

“This was an era of great deeds by good men and women, and betrayals by those who were gripped by greed and adventure ... The most vivid and accessible account to date of the workings of the apartheid forces to thwart the struggle for freedom in our land."- Mkhuseli Jack

Jonathan Ancer is a journalist who has worked as a reporter at The Star, a features writer for magazines, the editor of Grocott's Mail and a crossword columnist for the Cape Times. He has produced podcasts and is the co-founder of the.news.letter. He has won awards for breaking news, feature writing and creative writing, and is the author of the highly regarded Spy: Uncovering Craig Williamson. Ancer is married, with four children and has the largest collection of Billy Bunter books in SA.

In this extract from his book Betrayal: The Secret Lives of Apartheid Spies, Jonathan Ancer tells how Dieter Felix Gerhardt and his wife Ruth were ...
Opinion & Analysis
11 months ago

"You have to let them into your confidence and let your guard down to get into their world. How do you betray them?"
Books
10 months ago

Mark Behr, who has died in Johannesburg at the age of 52, wrote perhaps the most searing novel yet about the hypocrisy and moral rottenness at the ...
Opinion & Analysis
4 years ago
Next Article