Launch of 'Black Tax' edited by Niq Mhlongo on October 10 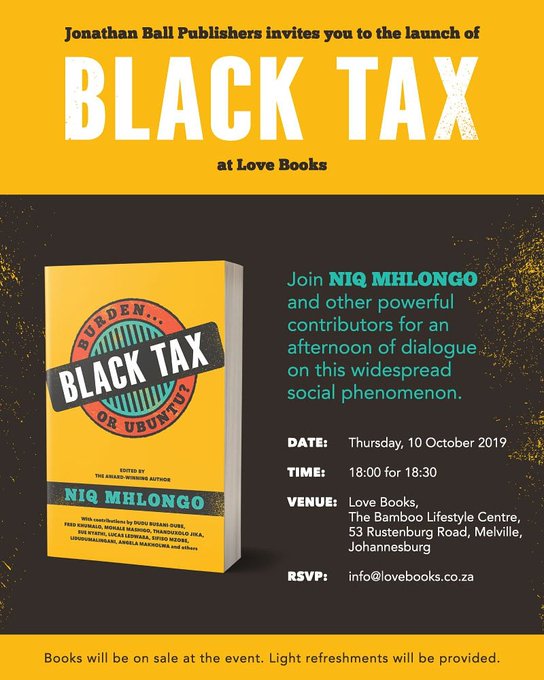 "The real significance of this book lies in the fact that it tells us more about the everyday life of black South Africans. It delves into the essence of black family life and the secret anguish of family members who often battle to cope." – Niq Mhlongo

A secret torment for some, a proud responsibility for others, "black tax" is a daily reality for thousands of South Africans. In this thought-provoking and moving anthology, a provocative range of voices share their deeply personal stories.

With the majority of black South Africans still living in poverty today, many black middle-class households are connected to working-class or jobless homes. Some believe supporting family members is an undeniable part of African culture and question whether it should even be labelled as a kind of tax.

Others point to the financial pressure it places on black students and professionals, who as a consequence struggle to build their own wealth. Many feel they are taking over what is essentially a government responsibility.

The book's contributors also investigate the historical roots of black tax, the concept of the black family and the black middle class.

In giving voice to so many different perspectives, Black Tax: Burden or Ubuntu? hopes to start a dialogue on this widespread social phenomenon.

Niq Mhlongo is an award-winning novelist, writer of short stories and screenplays (for radio and television), as well as a travel journalist. His fiction, which includes the novels Dog Eat Dog (2004) and After Tears (2007), has received critical acclaim and has won or been shortlisted for a number of literary awards. His work has also been translated into several languages, including French, Dutch, German, Spanish and Italian. Mhlongo has been a writing fellow at a number of institutions around the world. Most notably, he was invited to participate in the International Writing Programme at the University of Iowa in the US.

Young black professionals on coping with financial demands from back home Most of us are familiar with the concept of “black tax”, but for those who ...
Lifestyle
3 years ago

Malcolm X on black tax: We are poor but happy at heart

Malcolm X says few implement Black Tax like he does.
TshisaLIVE
4 months ago

‘Doing you’ is a luxury that not many afford': Linda Mtoba on black tax and responsibilities

Linda Mtoba believes there is a strong difference between black tax and responsibilities.
TshisaLIVE
3 months ago

Since 1994, South African politicians have appeared in public every five years to seek a fresh mandate from citizens. Often, the world over, ...
Opinion & Analysis
1 year ago

Over the past decade, photographer Ilvy Njiokiktjien has been exploring, in pictures, the lives of our born-frees, and on how far (or not) our ...
Lifestyle
8 months ago