Launch of 'A House Divided' by Crispian Olver on October 17 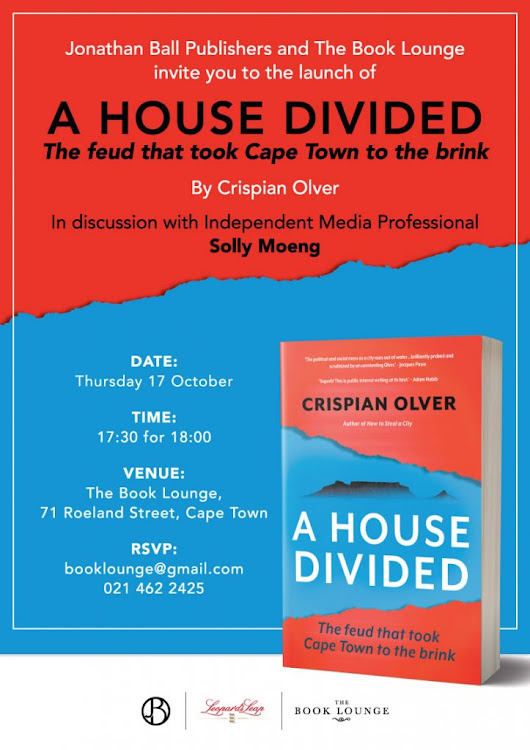 It’s 2018 and Cape Town is racked by its worst drought on record. The prospect of “Day Zero”, when the taps run dry, is driving citizens into a frenzy.

Then the ruling DA removes control of the water issue from Mayor Patricia de Lille. While politicians turn on each other, revealing deep-lying fault lines and new enmities, it raises a critical question: who will lead the Mother City through the crisis?

Against this fraught backdrop, author and academic Crispian Olver resolves to explore how the city of his childhood is run. He sets his sights in particular on the relationship between local politicians and property developers.

Interviewing numerous people, including many dropped from the city administration in often questionable circumstances, Olver uncovers a Pandora’s Box of back-stabbing, infighting and back-room deals.

He explores dodgy property developments in the agriculturally sensitive area of Philippi, on the scenic West Coast and along the glorious — and lucrative — Atlantic seaboard. He delves into attempts to “hijack” civic associations and exposes the close yet precarious relationship between the mayor and city hall’s “laptop boys”. And in blistering detail, he gets to grips with the political meltdown within the DA and the defection of De Lille to form her own party.

Crispian Olver has been a medical doctor, political leader, environmental activist and public servant. He joined Nelson Mandela’s office in 1994 as head of planning for the Reconstruction & Development Programme (RDP) and went on to run the department of environmental affairs and tourism as director-general. He has had a lifelong interest in local government issues and, in 2015, took on the most challenging assignment of his career: heading up an intervention to clean up corruption in the Nelson Mandela Bay metro.

How politicians made war during Cape Town's water crisis

In the middle of January 2018, Mmusi Maimane announced that Patricia de  Lille would be relieved of her water-related responsibilities “immediately”, ...
Opinion & Analysis
10 months ago

Researcher‚ activist and author Dr Crispian Olver has questioned whether the City of Cape Town has something to hide‚ after he was refused access to ...
News
2 years ago

Mmusi Maimane, the leader of South Africa’s main opposition party, the Democratic Alliance, that governs the City of Cape Town and the Western Cape ...
News
2 years ago

UDM leader Bantu Holomisa, who dumped the DA in Nelson Mandela Bay, reportedly said this week it ran a coalition of 'thugs and liars'. Chris Barron ...
Opinion & Analysis
1 year ago
Next Article