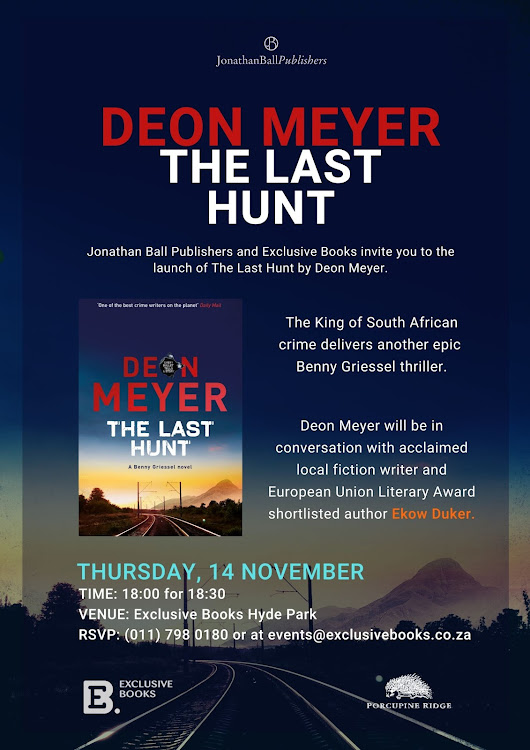 Join Deon Meyer in Jozi for the launch of the sixth instalment in the Benny Griessel series.
Image: Jonathan Ball

In The Last Hunt, two strands of the same story become a race against time — for Hawks captain Benny Griessel and Vaughn Cupido to stop an assassination, and for international hitman Daniel Darret to evade the relentless Russian agents tracking him.

Griessel and Cupido are tasked with investigating a cold case, a difficult case surrounded by mystery, lies and evasion.

The body of ex-cop John Johnson has been found by the side of a railway line. He appears to have jumped from the world's most luxurious train and the two (suspicious) characters seen with him have disappeared.

The police have already failed to make progress and others are intent on muddying the waters.

Meanwhile, in Bordeaux, France, Daniel is settled in a new life on a different continent. But his assassin skills are required one more time, and he is given no choice in the matter. Daniel must hunt again. His prey? The corrupt president of his homeland.

Meyer is launching the sixth book in the Benny Griessel series, in the company of John Maytham
Books
2 years ago

On October 27 a six-part miniseries of the thriller will be shown on M-Net, in collaboration with Germany's ZDF and HBO's sister network Cinemax
Books
2 years ago

Deon Meyer, executive producer of 'Trackers SA', says the transition from writing a book to making a TV series was challenging but pleasant
Lifestyle
2 years ago

"Great stuff," writes the acclaimed American author of the English translation of Koors
Books
3 years ago