Launch of 'Robert McBride: The Struggle Continues' by Bryan Rostron on November 26 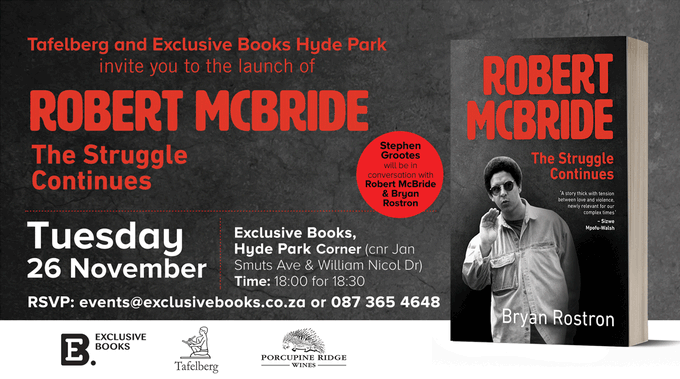 When Robert McBride was sentenced to death, he turned to the public gallery in court and said: ‘‘Freedom is just around the corner. I am leaving you at the corner – and you must take that corner to find freedom on the other side.’’

As the guard moved in, he raised his fist and shouted: ‘‘The struggle continues until Babylon falls!’’

It was 1987: the time of "total onslaught". The trial of the MK unit that planted the Magoo's bomb on the Durban beachfront dominated the news, but few knew the real facts about the brave young people who brought the armed struggle to KwaZulu-Natal.

This is the remarkable story of McBride and his comrades: the substation sabotage spree, rescuing a compatriot from hospital and smuggling him to Botswana, the devastating Why Not Bar and Magoo's car bomb that killed three women, the dramatic trial and McBride’s 1,463 days on death row.

Now updated to include McBride’s controversial life after the end of apartheid, this is a thrilling tale of a young South African’s incredible courage, loyalty between friends and falling in love across the race barrier. Today, the struggle continues as McBride fights against corruption and state capture.

Public protector Busisiwe Mkhwebane will again be hauled before the courts at a time when she faces a credibility crisis following numerous adverse ...
News
2 years ago