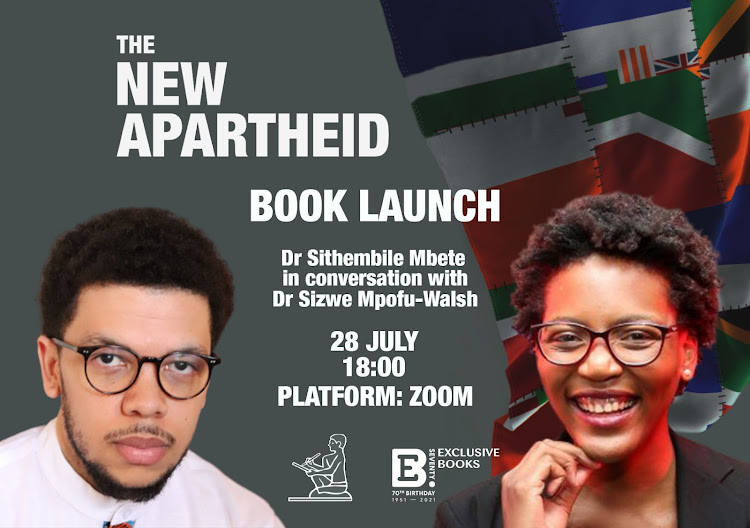 Sizwe Mpofu-Walsh will be in conversation with Sithembile Mbete for the digital launch of 'The New Apartheid'.
Image: Supplied

SA’s story is often presented as a triumph of new over old, but while formal apartheid was abolished decades ago, stark and distressing similarities persist. Dr Sizwe Mpofu-Walsh explores the edifice of systemic racial oppression — the new apartheid — that continues to thrive, despite or even because of our democratic system.

Register here for the launch.

Apartheid has always survived on violence. Forced removals, political assassinations, massacres and mass imprisonments all maintained the apartheid state. Apartheid’s notorious police force was a key institution in this violence. The conversion of violence from public to private institutions provides, therefore, an important window into the persistence of apartheid under democracy. The new apartheid uses a wide repressive apparatus of its own, designed to entrench power and property relations. But this apparatus exists parallel to state control, permeating malls, recreational areas, transport terminals and busy streets.

On any given weekday, Van Beek Street in Doornfontein, Johannesburg, is lined with hundreds of black men. They vie for a qualification from the SA Security Academy – the key to a job in the sprawling private security industry. Now SA’s fourth-largest employer, the private security industry spans around 10,000 companies and nearly half a million active private guards – a force bigger than the army and police service combined. The industry has become central to the economy, accounting for nearly 4% of employment and a similar size GDP. SA’s private guards protect and patrol the labyrinthine borders of the new apartheid.

Private security forces control large parts of otherwise public space, increasingly usurping the role of the police. The privatisation of SA’s most valuable commercial region, Sandton, illustrates the extreme end of this trend. City Improvement Districts (CIDs) style themselves as “self-governed districts that are initiated and governed by property and business owners to operate within a designated urban and suburban area” on the basis of “a reduced role for the local government and transferring the service provision responsibilities to private stakeholders”.

According to the Sandton Central Management District, the umbrella body of three Sandton CIDs, “these three improvement districts ... manage the public space bound by Sandton Drive, Katherine Street into Wierda Road East and West, West Street, along Rivonia Road and including Grayston Drive”.

However, this “public safety” is inevitably equated with commercial safety rather than protecting people from violence. Security companies account not to the state but to the businesses which fund them, and they are prepared to use force against citizens, if necessary. Private security companies thus become the “arbitrators of access to  and accepted conduct within” the areas under their control. This loosens the state’s grip on violence in important commercial centres – a central feature of legitimate state power. Neighbourhood residents’ associations play a similar role in formerly white suburbs.

The extent of this private power cannot be underestimated. In a survey of security guards in the Sandton CID, 36% of them said they would “forcibly remove the homeless and vagrants from the space by physically manhandling them” while 61% said they would arrest them if they did not cooperate. Guards also regularly confiscate goods from ­“vagrants” and “illegal” traders. They are also encouraged to crack down on “dustbin hunting”, rough sleeping, hawking and begging. Small traders who obtain licences to work inside the CID are, in turn, bound by by-laws which prevent them from “creating nuisance”. But only 1 % of security guards had read these by-laws. CID security personnel admitted to targeting suspects by the clothes they wore, with an emphasis on “torn clothes”.

The very lines between private and public policing have become intertwined. The private security industry is so much a part of SA life that its legitimacy goes unquestioned. Criminals, too, are known to dress up as police before they hijack cars or steal watches. This creates a sense of insecurity within the new apartheid. One is never quite sure in SA whether a police vehicle is a vector of crime prevention, crime itself, or some collaboration of interests in-between.

The role of these new privatised police officers is ultimately to exclude certain categories of persons from commercial centres. Although their task is not avowedly racist, the patterns of racial exclusion cannot be avoided. Sandton comes to represent all spaces of privilege in SA, from malls to universities. Black people moving through these spaces occupy an ambiguous role. They are either rightful residents deserving of protection, or they are threats who must be surveilled and policed. Hence, to avoid the attentions of these private police forces, black people must develop a sophisticated and unspoken language to project their legitimacy.

This language involves subtle hints in body language, acts of faux confidence and, most importantly, a set of economic signals through clothing and car ownership. But these signals cannot be too extreme, either, lest black people be confused for drug dealers. This delicate balance cannot always be struck, and innocent black people moving through these spaces of privilege inevitably conflict with private armies – also made up of black guards – which are tasked with categorising black bodies as dangerous or safe. The signals black people send as they move through these privately patrolled worlds are, in fact, similar to the pass books of old. They explain, in part, why even the most progressive black people often revert to flashy symbols of opulence. These symbols offer protection from violence just as they confer social status.

But, tragically, they can also attract violence and moral condemnation. Black people cannot be too rich or too poor in the new apartheid. They must occupy a safe middle ground between the two. The regulations of the new apartheid are often unwritten and unspoken. But they are no less effective. The role of private police is ultimately to patrol these regulations by excluding suspicious persons. This exclusion is underwritten by private power.

Advocate Dali Mpofu was beside himself when he announced that his son, Sizwe Mpofu-Walsh, had obtained his Doctor of Philosophy degree in ...
News
1 year ago

WATCH | LOL! Coconut Kelz to Sizwe Mpofu-Walsh: 'You could've been a Sean but you chose to be a Sizwe'

Coconut Kelz was featured on 'The Sizwe Mpofu-Walsh Xperience' on YouTube.
Lifestyle
1 year ago

Author, musician and activist Sizwe Mpofu-Walsh has created a WhatsApp news channel that serves as a platform for young people to air their political ...
News
2 years ago