EXTRACT | The Lion & the Thespian by David Bloomberg

Margaretha van Hulsteyn (then-wife of Hans Strydom) has a frank discussion about her sexuality with her eventual life-partner, Gwen Ffrangcon-Davies, in this edited extract of The Lion & the Thespian

Margaretha van Hulsteyn (also known as Scrappy) is the daughter of respected Pretoria attorney Sir Willem van Hulsteyn, and she’s an aspiring actress. While studying in London after the Great War, Scrappy changes her name to Marda Vanne and enters into a relationship with one of the foremost actresses of her day, Gwen Ffrangcon-Davies. 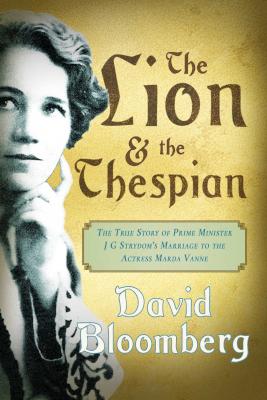 However, on a visit to her parents in the Union of South Africa, Marda meets Hans Strydom, an attorney and uncompromising radical politician with the soubriquet ‘The Lion of the North’.

Their meeting changes the course of her life, at least temporarily… Strydom went on to become a principal progenitor of the harshest discriminatory legislation which endured for decades until his nephew, President FW de Klerk, in a volte-face, dismantled the laws of apartheid.

A work of biographical fiction, The Lion & The Thespian is based on the true story of the marriage of Hans Strydom, prime minister of South Africa from 1954 to 1958, to the actress Marda Vanne.

Veteran author David Bloomberg (former executive mayor of Cape Town, and founder of Metropolitan Life), following extensive reading and research, has adhered faithfully to the chronology of the lives of the main protagonists, their personalities and the historical facts with which they were associated.

In this edited extract, Margaretha van Hulsteyn (also known as ‘Scrappy’) – an Afrikaans actress who had spent many years on the London stage – has a frank discussion about her own sexuality with fellow actress and eventual life-partner, Gwen Ffrangcon-Davies:

Already one of the most acclaimed actresses on the English stage, Gwen Ffrangcon-Davies was inundated with offers of work and success followed success.

Although Scrappy did not achieve the same level of stardom as her companion, Bernie Lewis had little difficulty in keeping her in work and she became an accomplished West End actress.

Settled in to a happy life of domesticity, the two were inclined to use their rare nights at home together to get to know each other a little better, explore their relationship a little further.

“Gwen, you have never identified – at least to me – the man who kept us apart all this time.”

“Oh, my darling, we no longer have any secrets. His name is Cecil Lewis, a war hero, much decorated – and married. I suppose I should feel very guilty about this romance, an adulterous relationship but, to be honest, I don’t.”

“Handsome and manly, courteous in the extreme, intellectual and a patron of the arts. For some reason, he was obsessed with me as an actress … came to any number of performances of every play I was in and afterwards spoke to me at length about the play, my role and interpretation.

“He was very profound and I always found his analysis interesting and gratifying. And, my darling, he was extremely virile.”

“Did he not know that you were … I suppose the term used now is ‘lesbian’?”

“Of course he knew. And I reminded him regularly, but his response was always to emphasise that homosexual experience did not exclude those whose preference lay elsewhere and that it was quite common for people to stray from their first gender of choice.

Did he not know you were ... I suppose the term used now is 'lesbian'?

“He was convinced that I would be sexually unfulfilled and incomplete as an actress if I did not have what he called a ‘straight ding dong’! As far as his pleasure was concerned, he was equally straightforward, seeing no spiritual benefit for himself, merely gratifying himself with a married man’s dalliance.”

“Seems Cecil was very pragmatic about the relationship.”

“Oh yes. He alerted me when our affair was starting to dwindle – hinted that he was beginning to lose interest, that it was terminal. He probably thought that he had achieved his purpose and had ‘made me a better actress’.

“I had told him all about you and he liked what he heard and was reassured that you were going to take over where he had left off. Happy that you would sort of be taking his place. He wrote the most beautiful letter to me.

“His last letter stated that the burden of guilt had been lifted and he thanked me in the most poetic terms for the wonderful experience; he hoped that I had benefitted intellectually from the relationship and he wished us both the best of British luck for the future!”

“Yes. I thanked him for the inspirational support he had given me during the period of our intimacy.”

While homosexuality in England in the early twentieth century was recognised and spoken of freely – despite the fact that it was a punishable offence – female sexuality was a subculture that was hardly mentioned in polite circles and the word ‘lesbian’ was not in common usage. The theatre, however, was regarded as a breeding ground for deviant behaviour.

Actresses particularly were at pains to ensure that insofar as theatregoers were concerned, they conformed to what generally was regarded as normality and that their life outside the theatre should be kept private and not come under public scrutiny.

Prejudice was such that any woman who chose to be single and worked towards economic and social independence was regarded as tainted.

From an early age, Gwen Ffrangcon-Davies recognised and accepted her sexuality, but believed that it would not advance her professional career and consequently chose to exercise discretion and presented to the public a much-feminised personality and lifestyle.

In her private life, where many of her friends were theatre colleagues, there was no concealing her identity but in public her selection of roles, her dress, manner and behaviour did much to disguise her true sexuality.

When interviewed by a curious press she managed to present herself as the epitome of femininity and domestication.

As far as Scrappy was concerned, Gwen, when pressed, referred to her simply as a ‘girlfriend’, at the time a perfectly run-of-the-mill reference to an innocent friendship.

Scrappy, on the other hand, was much less discreet.

Although six years younger, she was more well informed on the controversies of the day, especially since she had read the work of English doctor and writer Havelock Ellis, whose Sexual Inversion had concluded that homosexuality was a congenital condition rather than a disease.

But, keen on intellectualising these matters, she had also learned that the Austrian neurologist and psychoanalyst, Sigmund Freud, had dismissed Ellis’s theory, claiming that sexual deviation was indeed curable.

Scrappy eventually dismissed all these theories and lived by what she regarded as fact – that all forms of sexuality were accepted and tolerated by those in the theatre.

While on appropriate occasions she would dress conventionally, sometimes even glamorously, her preference was for a more masculine style and her hairstyle was often fashioned accordingly.

“So, my darling Scrappy, what goes on between us is our business and has naught to do with anyone else. I love you deeply for who you are and any frolic that accompanies our love is a by-product to be enjoyed. My bounty is as boundless as the sea, My love as deep; the more I give to thee, The more I have, for both are infinite.”