"You lurch into a woman on your way back from the toilet. The woman has spiky hair. Her skin is white." 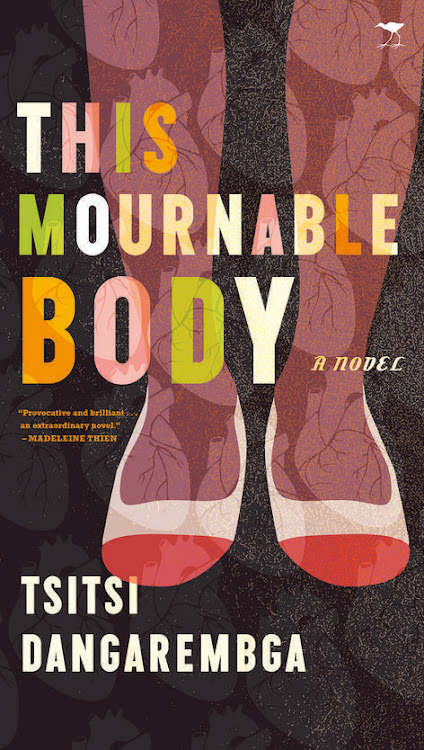 Anxious about her prospects after leaving a stagnant job, Tambudzai finds herself living in a run-down youth hostel in downtown Harare.

For reasons that include her grim financial prospects and her age, she moves to a widow’s boarding house and eventually finds work as a biology teacher.

But at every turn in her attempt to make a life for herself, she is faced with a fresh humiliation, until the painful contrast between the future she imagined and her daily reality ultimately drives her to a breaking point.

In This Mournable Body, Tsitsi Dangarembga returns to the protagonist of her acclaimed first novel, Nervous Conditions, to examine how the hope and potential of a young girl and a fledgling nation can sour over time and become a bitter and floundering struggle for survival.

As a last resort, Tambudzai takes an ecotourism job that forces her to return to her parents’ impoverished homestead. This homecoming, in Dangarembga’s tense and psychologically charged novel, culminates in an act of betrayal, revealing just how toxic the combination of colonialism and capitalism can be.

Tsitsi Dangarembga is the author of two previous novels, including Nervous Conditions, winner of the Commonwealth Writers’ Prize. She is also a filmmaker, playwright and the director of the Institute of Creative Arts for Progress in Africa Trust. She lives in Harare, Zimbabwe.

You climb out after Christine when the combi stops at Copacabana. She steers you eastward over a cavernous pavement in silence for the rest couple of hundred metres.

“He became quite rich,” she says in the end, as an afterthought. “It turns out he was good at what they called doing business. That’s what they called it after Independence. You know,” she observes, “it is better to call it April 18. What do we really know about independence? Maybe that it was just for people like my uncle.”

Her voice is sad now, rather than scornful, as she divulges how VaManyanga soon purchased a new dwelling in an area further to the city’s north, from another white person who was also departing to New Zealand, where there was not, nor could ever be – since all the earlier nations had been eradicated – any talk of indigenising anything.

It turns out that, just like you, everyone had applauded VaManyanga’s achievements. No one queried anything. Relatives and colleagues alike praised the way the newly independent businessman had turned his inheritance into hard currency and deposited it safely in a bank on the Isle of Man.

“What did they want? Of course, to borrow my uncle’s money from him,” Christine snorts. You shake your head and suck your teeth, genuinely outraged on behalf of your companion’s uncle.

“He was too shrewd. I admit he was clever,” shrugs your companion. “So hardly anybody got anything. So what did they start saying? That all that money he made could never just come from hard work, but that he had some wicked, blood-drinking goblins.

"So some of them started trying to find out what muti my uncle was using. Some wanted to neutralise it with stronger medicine, others wanted to use it themselves. More than one mouth said his charms contained pieces of kidnapped children’s bodies.”

As she mentions this, Christine confirms her uncle was the sort of man who might well have gone so far as taking the children’s parts to South Africa for sale or for imbuing with magical properties, or that he could very well have buried the organs in places where he wanted to establish further ZPNB depots.

VaManyanga, though, you find out to your satisfaction, did not let rumours derail his upward mobility.

This came with the war. All of it."

He soon purchased more properties and moved out of his second home to enjoy a grander lifestyle. Visits to the village where their niece lived became less frequent. Christine tells you she was comfortable with that, as she had ceased to either like or respect her relatives.

Understanding with some impatience that Christine is speaking not only about the Manyangas, but about all people who harbour the same intense cravings for advancement, “This came with the war,” you say. “All of it. Nobody ever did things like that before you people went to Mozambique and went about doing what you know you did.”

“There is nothing any freedom fighter did,” your companion says, “that people didn’t do in the villages. You know they started doing those things themselves very easily. And all of them are carrying on. Me, when the war ended, I swore I would find something to do with my own hands. I pledged I won’t do that kind of thing anymore. No matter what happens.”

With this Christine walks ahead briskly, bringing you soon to the disco, whose vibrations curtail further talking. She talks her way past the outsize bouncers at the club door, who look you over, objecting with pointed questions to two women entering the club unaccompanied.

Down in the basement with the strobe going too fast and the music pumping a hallucinogenic rhythm, your companion surveys the room, weaves through dancers and tables to prop her elbows on the bar.

She gives the solitary man beside her a sidelong glance, demonstrating how to extract all the booze you want from men without having any parts of your body grabbed.

You discover you are good at it. It is marvellous to be good at something. You haven’t been good at much in a long time. Even the things you were good at, your education, your copywriting at the advertising agency – in fact one and the same thing – have in the end conspired against you, handing out a sentence of isolation.

Soon you are too drunk to think of anything but downing more.

While you drain glass after glass of vodka, Christine starts taking liquor with every second or third glass of Mazoe.

You lurch into a woman on your way back from the toilet. The woman has spiky hair. Her skin is white.

“Mind!” she says, setting her drink on a table, wiping dripping fingers on the back of her jeans.

You stare at her, your eyes attempting to focus. When the image is as clear as it is going to get: “Tracey!” you bellow.

“Excuse me?” says the white woman, giving you a tolerant smile.

“I know you,” you tell her. “I used to work for you. And we went to school together. Are you going to pretend?” you crescendo. “You know you know me.”

Excuse me?" says the white woman, giving you a tolerant smile.

Even as you speak, you are aware this person is not that particular white woman, the executive from the advertising agency who schemed with her fellow white people to steal the ideas you sweated over and produced for copy.

With this knowledge, the hole in the universe yawns wide in front of you again and the woman who knows better than the one you hear roaring disappears into its depths. Making yourself as large as you can, you scream, “Don’t pretend with me, Tracey!”

“Both,” you insist. “I mean, you’re my boss. From the advertising.”

The woman takes a deep breath.

“Not me,” she says, exhaling sharply.

She moves away onto the dance floor, joining a multiracial pocket of people, complexions ranging from ebony to pale marble. You follow her. She ignores you. You hear someone talking loudly, telling you she is not the woman who employed you at the advertising agency. You know this sensible voice is located in your brain. You don’t listen to it.

“You are lying. That’s what you are doing,” you keep shouting. As you shout you lunge. The white woman sees you coming. She dodges round you and you fall into a trio of dancers. Bracing themselves on their platform shoes, tossing their weaves, “Get away,” they shout, shoving you from one to the other.

The men from the door surge onto the dance floor. They clamp the flesh of your upper arm in their fingers, asking which you prefer, calming down and being reasonable or being prohibited. They have, however, reckoned without Christine.

Your companion plants her fists on her hips and informs the bouncers she is an Independence struggle ex-combatant, Moscow trained, and she can see half a dozen others still in fighting form around the bar; nor does it matter if some are not actually Soviet alumni but were trained in China, they are all comrades and fighters.

In spite of Christine’s intervention, the bouncers keep holding on to your arm, saying they are hired to end things; that when out-of-control women start beginning their messes with peaceful dancers, that is what they are ending. So Christine tells them you are under control and heaves you up the stairs and out onto the street.

You refuse to walk. Christine drags you away from the club.

You shout more and more loudly for her to release you. When she doesn’t, you scream that you will be damned if you ever go anywhere with her again. While you fling abuse at her, Christine manoeuvres you to the nearest bus stop.

She props you up on the termite-eaten bench, pushes a dollar note into your jeans pocket and tells you to take the first combi travelling towards Mai Manyanga’s.