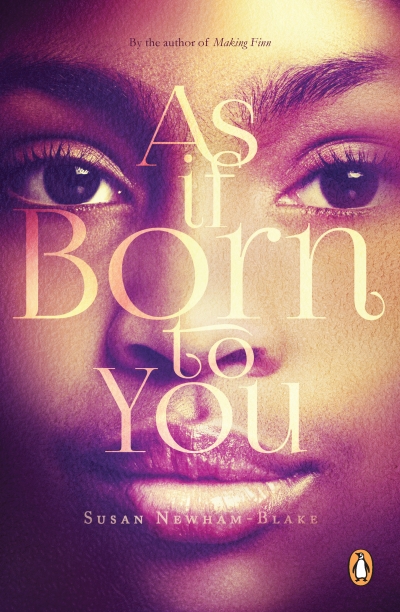 'As if Born to You' is a moving novel about two equally damaged women who discover healing in unlikely places.
Image: Penguin Random House

When 13-year-old Zuri begins cutting herself, psychologist Ana is called in to help.

Is the troubled girl trying to relieve the tension of being black in a predominantly white private school? And how healthy is Zuri’s relationship with Helen, the white single mom who adopted her?

Struggling to soften Zuri’s defences during the course of the therapy, Ana must piece together the puzzles of both Helen and her daughter, including the truth of what happened to Zuri’s biological mother. But reckless, alcoholic Ana carries within her an old trauma of her own.

In Susan Newham-Blake’s moving novel, two women, equally damaged by the past and its secrets, discover that healing sometimes lies in unexpected places.

Ana wants to know things not even my best friend Amy knows and I tell Amy almost everything.

I met Amy in the second term of Grade Eight. She arrived midterm because she only got in to St Theresa’s when Antonia Castiglione emigrated to Europe. There were three open seats in the classroom and the teacher said she could choose whichever one she liked. She chose to sit next to me. She was quiet in the beginning and I felt sorry for her for arriving late in the year like that and not knowing anybody. Everyone had already made at least a few friends and some had friends from primary school, although there was only one girl in my class from my primary school – Sophia Baron-Temlett – and we are definitely not friends.

Sister Miriam gives us a religious education class every morning and she always comes in carrying a huge pile of Bibles and books and papers. The first thing she does is drop at least one book onto the floor, and so, on the first day Amy was there and Sister Miriam arrived, I nudged her arm and said, ‘Watch the power of the Lord at work.’

On cue there was a loud thump as Sister Miriam dropped not one book, but all of the books. It happened in slow motion and there were bookmarks covered in doves and crosses and pieces of paper lying all over the classroom floor. I leant down to pick up a little handwritten card. It read, May the Lord keep you safe on your journey.

I glanced at Amy. Her eyes were watering and there was a small smile on her face. I held up the card. She read it, clenched her lips together, and went bright red. Our desk started squeaking as it rocked against the floor. It looked like Amy was going to explode. Sister Miriam watched us from the front of the classroom without smiling, waiting for us to stop. But we couldn’t. There were giggles from some of the other girls. Erin and Mia, who were sitting right behind us, were now also laughing, and then Sophia and Emily-Rose, and then it seemed like the whole class was stifling giggles.

Sister Miriam’s voice is the same size as she is – not very big – and it took a while before anyone could tell that she was shouting. Amy noticed first, when she stopped laughing and started breathing again. I raised my head and Sister Miriam was staring right at me.

‘You! Devil’s child!’ she said. ‘Get out of my classroom. We don’t need types like you here.’ Her voice came out in a shouty whisper.

‘Go and stand outside for the rest of the lesson.’

I looked at Amy but she was staring down at her desk, shaking her head, and I wondered if she was angry with me. I’d ruined her first day. I’d got her into trouble. She’d hate me now, probably move desks.

At the end of the lesson, after I’d had my talking to by Sister Miriam, Amy was waiting for me.

I shrugged. I wasn’t sure. I just knew it made me feel bad and I probably deserved it.

‘I think she said it because you’re black,’ Amy said. ‘She’s an idiot.’

And right then Amy became my best friend.

But that was before everything changed. Before my discovery. Before I started cutting myself because it seemed like the only thing that would make me feel better.

I’ve cut myself a lot over the past months. After every test I messed up. When I was one of the only girls not to be invited to Sophia’s birthday at the ballet on ice. When Nandi and Zodwa called me names and laughed at me because my Zulu sounds like a mlungu’s. When they told me I think I’m better than them.

New collection explores the daily lives of marginalised people who may otherwise be forgotten or dismissed.
Books
3 years ago