Novel-enthusiasts exult! For the next few Fridays we'll be treating you to extracts from the five titles shortlisted for the 2019 Barry Ronge Fiction Prize. This week's read? 'The Ones With Purpose' 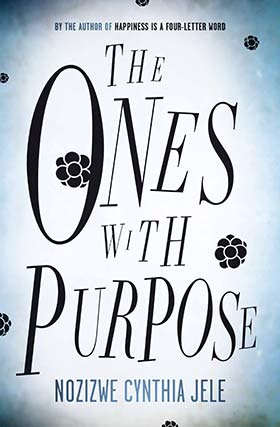 'The Ones with Purpose' is a remarkable story of family, disappointment, sacrifice, forgiveness, and love.
Image: Kwela

With her sister, Fikile, dead from breast cancer, her father long gone, her mother emerging from years of slumber, and her younger brother, Mbuso, consumed with rage that refuses to settle, Anele Mbuza has no choice but to collect herself and grow up.

Or does she? Because, if truth be told, she has not signed up to be her family’s caretaker. Surely her dreams are valid?

The Ones with Purpose is a remarkable story of family, disappointment, sacrifice, forgiveness, and love.

“I won’t be here for you forever,” Fikile once said. I was in grade seven, and had just turned thirteen. My sister was nearly seventeen. Fikile came home with two plastic bags full of groceries – a block of margarine, soft and folded at the edges, a tin of apricot jam, Mbuso’s favourite, cooking oil, sugar, dry soup, crunchy peanut butter and baked beans – food we had not tasted in months. She dumped the groceries on the kitchen table with such force I feared she had broken the peanut butter bottle.

Fikile glared at Mbuso and me. “You hear me? I said I will not be here to feed you forever. I’m not your mother. I’m not your father. I didn’t bring you into this world, I’m not responsible for you and I cannot be expected to raise you. I have my own life to live.” She dragged out “own life” as if she wanted the words to stay engraved in our minds.

I remained glued to the spot between the table and the stove with my sweaty forehead and the wooden spoon laden with scraps of wet porridge in one hand. I had taken over the role of cooking when Fikile wasn’t home. I knew not to speak to my sister when she was in her bad moods, which was becoming common and frankly – I reasoned – unfair to us.

Fikile was not wearing her school uniform; it was not the first time she returned from school in her “home” clothes. I knew the uniform was folded neatly and tucked inside her school bag, together with a Ziploc bag containing vanishing cream that made her skin look smooth and powdery like a ghost, thick black eyeliner, a lipstick – lollipop pink or red like a Coca-Cola can – deodorant spray, a face cloth, and a bar of coconut-smelling soap. Ma was not aware of this or what Fikile and I got up to behind the boulders to pass time and fantasise about a life elsewhere. Ma had not read Mbuso’s school reports, with skewed stars and remarks – EXCELLENT, CLEVER BOY, A BRIGHT STAR – scribbled all over. Ma was blind to most of the happenings around our house, our lives.

Fikile turned her back and walked to her room, slamming the door shut. A piece of concrete peeled from the wall and fell on the floor. Mbuso jumped with fright.

“Why is sisi angry at us?” Mbuso asked. We were packing away the groceries my sister had brought.

“She is not angry at us,” I said to my brother. “Maybe one of her friends made her angry.”

My sister leaving us was my worst fear. Sometimes I woke up in the middle of the night and tiptoed to Fikile’s room, and cried when I found her bed empty. On those nights, which became frequent as the year wore on and the scandalous rumour spread of her relationship with one of her teachers, Sir Thokozani “Thiza” Dlamini, I did not go back to sleep until I heard the kitchen door lock turn and feet shuffle softly towards the end of the passage.

Fikile was four months pregnant with her first child, Khanya, when she finally confided in me. But I already knew – the morning fervent rush to the toilet followed by loud gagging; her unpredictable behaviour, dissolving into tears at the slightest provocation, like when Mbuso told her she was looking big, like almost fat but not quite fat; her sudden craving for chalk, clay, crumbling soil on the branches of our neighbour’s hedge – things I had learned in my Biology class. I knew Fikile was sleeping and now she was pregnant. I was conflicted and disappointed, surely my sister

was smarter and should have known to go to the clinic and get an injection to prevent. I never got to ask her why she didn’t let Thiza empty his juices on her thighs instead. Everyone who was sleeping knew the trick to not falling pregnant.

Fikile was calm as she told me that she would leave school, enrol at the night school to complete her matric; she was adamant that she was going to write her final exams. She said she would raise the child on her own if she had to, because as things were, Thiza was acting funny, as if he was not part of the life growing inside her. She let me touch her swollen stomach, which was smooth and hard, a well-defined roundness.

“What are you going to tell Ma?” I asked, though I knew that in Fikile’s view, our mother had ceased to exist and therefore her opinions did not matter.

By the seventh month, clever layers of oversized clothes could not hide Fikile’s pregnancy, and the rumours of her being with child circulated widely at our school, in turn rendering my life a living hell like I was the one who was sleeping with the teacher. I was certain everyone was talking about my sister, as if she was the first person in our township to fall pregnant, and by a teacher. My friends avoided me for a while, perhaps they thought my sister’s pregnancy would rub off on them. I kept to myself, went straight home after school, did my homework and played with my brother, who was oblivious to the happenings around him. Only months later, after Khanya arrived, did one of the girls on my street confess that her parents had forbidden her from hanging out with me. She said her mother said Fikile and I were nothing but trouble.

Fikile remained unscathed by the gossip and stares, but she did drop out and, with Auntie Betty’s help, enrolled at a school that allowed her to attend classes at night and write exams. When Ma eventually found out about the pregnancy, much later than anyone else, and only because Auntie Betty told her, she threw a drunken fit and chased Fikile out of her house.

“I will not share my house with another woman,” Ma screamed, and started pulling Fikile’s clothes out of her closet, throwing them into a pile outside the kitchen door. “You’re a woman now, Fikile, right? You know how to open your legs for a man? Well, go and be a woman in your own house, not here. I’m raising children here.”

Ma turned to me. “And you,” she said, wriggling her shaking finger, “if you ever bring such shame on my house you know what will happen to you.”

Ma’s words were as sharp as a blade and cut through my heart. I had done nothing to deserve her explosion. Had I not been a good girl who never strayed, obedient to the house rules? Had I not watched over Mbuso, brought only good grades home, cooked when Fikile was out until the early

hours of the morning? Had I not helped Ma out of her clothes when she was too drunk to undress herself, brought her strong black coffee in the morning to nurse her hangover before rushing off to school?

Fikile collected her clothes and put them in small plastic bags, and took a taxi to Auntie Betty’s house. Mbuso and I walked with her to the main road.

“You must both go to school, okay?” Fikile said before boarding the taxi. “I’ll be back soon.”

Mbuso waved until the taxi disappeared, and then he cried. When we returned home, Ma had locked the gates. We spent the night at Auntie Maria’s house. I was so hurt, I did not speak to my mother for several days. I don’t think she even noticed.

Barry Ronge Fiction Prize 2019: a taste of the shortlisted titles

A look at the shortlisted books and insight into the authors.
Books
2 years ago

The first extract of the five novels shortlisted for the 2019 Barry Ronge Fiction Prize.
Books
2 years ago