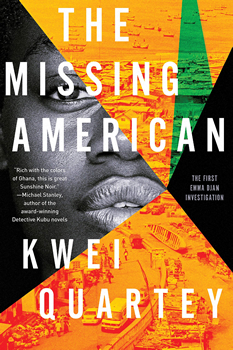 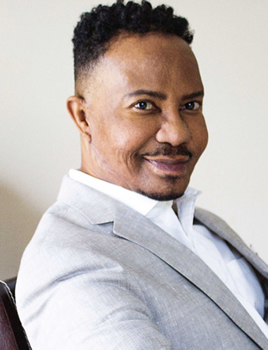 Kwei Quartey is the author of the acclaimed Inspector Darko Dawson mysteries set in Ghana.

New York Times bestselling author Michael Connelly has said: “Kwei Quartey does what all the best storytellers do. He takes you to a world you have never seen and makes it as real to you as your own backyard.” The LA Times described Quartey’s debut, Wife of the Gods, as a gem, and the book went on to be an LA Times bestseller. This was followed by four more in the series.

Now Quartey has branched out with a new series featuring the appealing private eye Emma Djan.

The first book in the series, The Missing American, is a twisty page-turner, delving into the dark domain of  Ghanaian internet fraudsters - the “sakawa boys”. They play their victims like game fish, but they’re only part of a vicious web of corruption and witchcraft that reaches all the way to the top echelons of society. Emma has her work cut out for her in this excellent first outing.

Quartey lives in Los Angeles, but spends much time in Ghana researching his novels. In this exclusive The Big Thrill interview, he shares insight into his new series and protagonist.

The Missing American is the first of a new series featuring private investigator Emma Djan. What motivated you to start a new series set in Ghana with a female protagonist?

Starting a new series has been at the back of my mind for quite some time. Sometimes you know what you’re going to do ultimately, but you must wait until you’re ready. By the fifth novel in the Darko Dawson series, Death by His Grace, I was ready for a change. Specifically, I wanted Darko to have a female partner, and my plan was to spin her off as a protagonist in a new series. But my editor, Juliet Grames at Soho, felt a new series with multiple references to Darko would not be a truly new series. Furthermore, it might hamper the satisfactory realisation and evolution of the new character. Juliet’s instincts were on target. Emma was “liberated” from the shadow of Darko and creatively I had the freedom to go with her wherever she wanted.

Emma is an appealing character. She longs to be a homicide detective but is thrown out of the CID. She then gets a job as a PI. How did you conceive her and how do you see her developing in the series?

I agree. Emma is appealing, and it may surprise readers to know I feel more relaxed around her than I do Darko. It could be that I was subconsciously competing against Darko as I wrote him - a testosterone-driven competitiveness, perhaps. As referenced in my answer to the first question, the Emma “prototype” was created in the fifth Darko Dawson novel, where she was a timid rookie. I like police procedurals, but I wondered what it would be like to have a protagonist who deals with a rigid criminal investigation department by looking from outside in. That way, she can see the forest for the trees. Emma can go in several directions, which is exciting. She’s not hamstrung by being in the police force.

As with all your books, The Missing American focuses on an important contemporary issue in Ghana that you’ve extensively researched. How widespread is internet fraud there, and how did you go about researching the scammers?

I had invaluable help from a private investigator in Ghana who personally knows scammers and the traditional priests who are part and parcel of the scammers’ lives. To quote the PI, internet fraud takes place “in almost every house in every community” in certain notorious areas of Accra, Ghana’s capital. It’s in one of these areas that I met and interviewed a priest and two fraudsters at length.

The plot revolves around the activities of the "sakawa boys" - the young men who make fortunes scamming people in America and Europe on the internet. They are smart and have sophisticated software, but they also rely on the powers of witchcraft. How important is this aspect to their success?

What I learned was fascinating. Spiritual powers are a vital part of scamming because those powers can make a fraudster wildly successful. At the same time, the powers must never be mishandled because they can also ruin the life of a scammer. To most Western readers, this is hokum, but these beliefs are strongly held within the sakawa communities. There’s a scene in my novel with a crocodile (that’s all I’ll say about it) that might seem unbelievable, but I did meet said crocodile. One interesting titbit - if you imagine these scammers to be shifty-eyed fugitives, you would be mistaken. They are perfectly pleasant and ordinary guys on the outside. The only clue is that they might dress flashily and wear hip hairstyles.