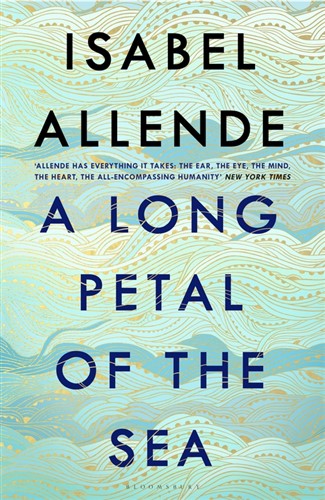 'A Long Petal of the Sea' by Isabel Allende.
Image: Supplied

September 3, 1939, the day of the Spanish exiles' splendid arrival in Chile, the second World War broke out in Europe.

Victor Dalmau is a young doctor when he is caught up in the Spanish Civil War, a tragedy that leaves his life and the fate of his country forever changed. With his sister-in-law, the pianist Roser Bruguera, he is forced out of his beloved Barcelona and into exile.

When opportunity to seek refuge in Chile arises, they take it, boarding a ship chartered by the poet, Pablo Neruda, to the promised “long petal of sea and wine and snow” over the seas.

There, they find themselves enmeshed in a rich web of characters who come together in love and tragedy over the course of four generations, destined to witness the battle between freedom and repression as it plays out across the world.

A masterful work of historical fiction about hope, exile and belonging, A Long Petal of the Sea is Isabel Allende at the height of her powers.

Born in Peru and raised in Chile, Isabel Allende is the author of The House of the Spirits, Daughter of Fortune, Paula, My Invented Country and The Japanese Lover. Her books have been translated into more than 35 languages and have sold more than 65 million copies. The Japanese Lover was an international and New York Times best-seller. She lives in California.

Seated in the midst of the gesturing babble that marks lunchtime at the Wits Club, Jonny Steinberg radiates stillness. Dedicated bird-watchers learn ...
News
2 years ago

The Great Farini would stride on to the stage and announce, ‘Ladies and gentlemen, and now for the highlight of the day, the ferocious Zulus.’ The ...
Books
3 years ago