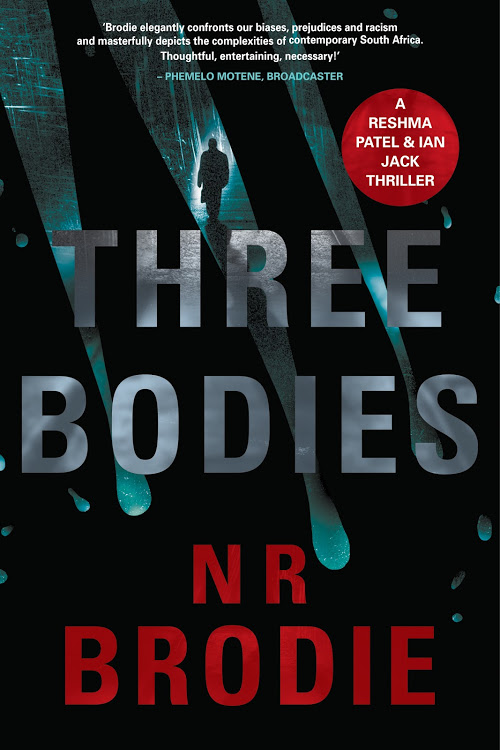 Reshma Patel and Ian Jack are back

The first body was found in Hartbeespoort Dam. An unidentified woman, presumably drowned, washed up on the banks of an exclusive golf estate.

Next came the discovery of a grisly crime scene deep underground in Johannesburg, somehow connected to a second woman found dead in the Jukskei River where it runs through Alexandra.

When the body of a third woman is pulled out of the Vaal River, south of Joburg, Captain Reshma Patel starts to wonder if a serial killer is at work – or if the mutilated corpses have anything to do with the spate of cash-in-transit heists she’s busy investigating.

When a fourth woman goes missing, Reshma and her partner, former police officer Ian Jack, have to figure out who is behind the killings, and stop them before they can strike again.

Jonas Jiyane stood at the edge of the Hartbeespoort Dam, gumboot soles gripping onto the part of the lawn where the grass turned muddy, and he would slip if he wasn’t careful.

The land flowed almost seamlessly into the water, an illusion facilitated by an algal bloom that had been killing off the fish for weeks.

The surface of the dam near the lock was covered with floating scum one shade off the rich green of the lawns. The water looked like thick soup and smelled like bad things. Jonas could taste it even when he breathed through his mouth; a slight rot that permeated the air.

A few metres out from the shore, an island of hyacinth floated above the algae, unbothered by the transient invaders, two predators leaving each other alone. Some of the hyacinth plants were in flower, pale lilac preening in the green. It was these that Jonas was after.

Jonas dangled his long pool scoop out over the water and dipped the net, slowly, working his way under and through the growth until he could separate a clump of hyacinth from its neighbours before lifting it and pulling it back to shore.

Behind him was a pile of plants already harvested, perhaps two or three wheelbarrows’ worth. By the end of the morning there would be enough to fill the back of a trailer. And when Jonas came again next week, it would be as if he’d never touched the alien mat at all. Jonas didn’t complain about the futility of the task. The occasional cropping was enough to keep the hyacinth from clogging the estate’s canals, and, if he was honest, he liked being at the water’s edge where it was mostly pleasant, algae notwithstanding, and almost always quiet.

On one of his previous hauls Jonas had accidentally netted a fish, dead from the algae. Other gardeners had found plenty more, the yellow-olive ones – Kurpers – and even a few waterfowl. The green water was poisoning the animals, but the golfers remained undisturbed.

Jonas harvested golf balls, too, when they washed up in the silt, or got trapped among the hyacinth clusters. There were at least four golf estates along the dam’s perimeter, not including the one at La Gondola.

Jonas didn’t get the apparent pleasure of repeatedly hitting a tiny ball into a giant human-made water feature, but he passed no judgement on those who did. One or other of the club members would always give him a few notes for a bucket of balls in good-enough condition.

He already had a small haul of dimpled chestnuts stacked in their own pile next to the draining plants. He would need to wash them off before he sold them again – they were all looking decidedly more green than white.

Jonas and the other gardeners took extra care to wash their hands after working lakeside, but they didn’t stop working.

The only thing the algae didn’t seem to affect was the hyacinth. Reach, scoop, lift, repeat. Jonas carried on with his work. He started humming a tune he’d heard on the radio. He wasn’t sure what it was called.

By 10 am, Jonas thought he only needed to add a few more nets to his harvest before calling it a morning. The waterline was unobstructed for a few metres along the entire stretch of the lock, where the water from the dam entered the canals that gave the estate its fancysounding name.

Jonas stepped closer to the edge, and then almost into the water – he could feel the cold and wet enter his right boot through a tiny hole. He didn’t really mind. He wouldn’t have to feel it for long, and he could change his shoes back at the staff quarters.

He took another step forward and held out the long metal handle of the net, dipping it under the surface again, aiming for a clump of plants just outside his reach. The hyacinth floated on its own buoyant bulbs hidden beneath the leaves. The roots gradually connected to each other, forming ever-larger networks that would cover the entire surface of the dam, given half the chance. After a moment’s calculation, Jonas thought that if he could pull this particular patch of plants a little closer, he’d be able to scoop all of them out easily.

He reversed his approach. He placed the net over one of the plants near the centre and let the plastic lip flop over the sides so it made a laager around the leaves and stems. He pulled, hard enough to yank the plant away from subterranean neighbours, but not so hard as to dislodge the net attached to the pole with a jury-rigged piece of wire.

After a couple of drags, the hyacinth gave way and started bobbing in his direction. Jonas stepped closer, ignoring the water that now filled up his other boot. He pulled the pole towards him, guiding the plant with the net as he did, until he was ready to turn, scoop, and drop.

The net and its cargo carved a wake through the green sludge. Jonas turned the net around and lifted his haul.

As he did so, something in the water caught Jonas’s eye. A long black strand, thick as a man’s thumb, twisting along the surface as if it was caught in an invisible current. For a moment, Jonas thought that it was a snake and he nearly dropped the pool net in shock. Caution helped him catch his breath and realise that, whatever it was, it was not alive. Just a piece of rubbish, he thought. An old power cable or something someone had chucked off a boat, something that had gotten stuck in the webs of hyacinth, and which had now come ashore.

Jonas reached into the water and pulled on the black strand with his bare hand. The rope felt spongey beneath his fingers. As he pulled, he felt movement on the other end, as if it was attached to something.

A second later, the water around him filled with more black shapes, more snakes, writhing in the water, reaching for his rubber feet where he stood. He had to stop himself from screaming out loud.

It took Jonas another second to realise that what he was holding in his hand was a length of human hair. And at the other end of the hair was a body.

The first body was found in Hartbeespoort Dam.
Books
2 years ago