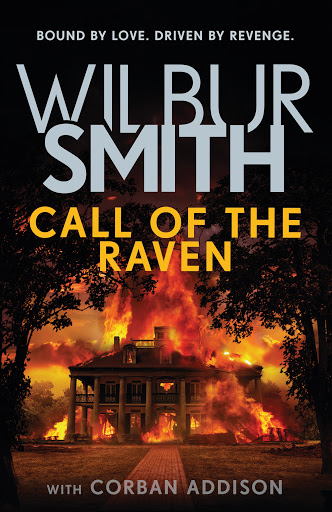 'Call of the Raven' by Wilbur Smith.
Image: Supplied

Call of the Raven is an action-packed and gripping adventure by bestselling author Wilbur Smith about one man's quest for revenge, the brutality of slavery in America and the imbalance between humans that can drive - or defeat - us.

The son of a wealthy plantation owner and a doting mother, Mungo St John is accustomed to the wealth and luxuries his privilege has afforded him.

That is until here turns from university to discover his family ruined, his inheritance stolen and his childhood sweetheart, Camilla, taken by the conniving Chester Marion.

Fuelled by anger, and love, Mungo swears vengeance and devotes his life to saving Camilla - and destroying Chester.

Camilla, trapped in New Orleans, powerless to her position as a kept slave and suffering at the hands of Chester's brutish behaviour, must learn to do whatever it takes to survive.

As Mungo battles his own fate and misfortune to achieve the revenge that drives him, and regain his power in the world, he must question what it takes for a man to survive when he has nothing, and what he is willing to do in order to get what he wants.

The chamber was packed. Young men in evening dress squeezed ten-to-a-row on the benches; more stood around the edges of the room, bodies pressed together.

The lamp-lit air hung heavy with sweat and alcohol and excitement, like a prize fight at a county fair.

But no blood would be spilled tonight. This was the Cambridge Union Society: the oldest debating club in the country and the proving ground for the nation’s future rulers. The only sparring would be verbal, the only wounds to pride. At least, those were the rules.

The front of the room was set up like a miniature Parliament.

The two sides faced each other from opposing benches, divided by the length of two swords. A young man named Fairchild, with sandy hair and fine features, was addressing the audience from the despatch box.

‘The motion before you tonight is, “This house believes that slavery should be abolished from the face of the Earth”. And, indeed, the case is so self-evident I feel I hardly need to argue it.’

Nods of agreement; he was preaching to the converted. Abolitionist sentiment ran high among the Cambridge undergraduates.

‘I know in this House we are used to debating the fine points of law and politics. But this is not academic. The question of slavery speaks to a higher law. To keep innocent men and women in chains, to tear them from their homes and work them to death: this is a crime against God and all the laws of justice.’

On the facing bench, most of the opposition speakers listened to his oration glumly. They knew they were on to a losing cause. One leaned forward and twisted his handkerchief through his hands. One stared at the speaker with such melancholy he looked as if he might burst into tears. Only the third seemed untroubled. He lounged back nonchalantly, his mouth set in a lazy smile, as if he alone was privy to some enormous joke.

‘If you have one ounce of humanity in you, I urge you to support the motion.’ Fairchild sat down to sustained applause.

The President waited for the noise to die away.

‘To close for the opposition, the Chair calls on Mr Mungo St John.’

The man who had been lounging on the front bench rose. No one applauded, but a new force seemed to charge the room. Up in the gallery, where a few well-bred young ladies were allowed to observe proceedings as long as they stayed silent, crinolines rustled and stays creaked as they leaned forward to see better.

You could not ignore him. He was twenty, but he loomed half a head taller than any other man in the chamber. His dark hair flowed over his collar in a long, thick mane; his darkly tanned skin shone with a lustre that no wan English sun could have produced. His suit was cut to accentuate his figure: a slim waist that rose to broad, well-muscled shoulders more like a boxer’s than a Cambridge undergraduate’s.

If he felt the hostility aimed at him, it did not shake the easy grin from his face. Indeed, he seemed to feed off the crowd’s energy.

‘You have heard a great deal this evening about the supposed evils of slavery. But has anyone here ever been to the great tobacco plantations of Virginia, or the cotton fields of the Mississippi?’

‘That is my native soil. I was born and raised in Virginia. Slavery to me is not sensational reports in the newspapers, or hell-raising sermons. I have seen the reality of it.’

He lowered his voice.

‘Is the work hard? Yes. Do rich men profit from the labour of others? Again, yes. But do not be gulled by these fantasies of brutality and violence you are peddled. At Windemere – my home, on the banks of the James river – my father keeps four hundred workers, and he cares for each one like his own child. When they work well, he praises them. When they are sick, he tends them. If they die, he grieves.’

‘That is because each one is worth a thousand dollars to him,’ said Fairchild. The audience laughed.

‘My friend is quite right,’ said Mungo. ‘But think of something you own that is worth that much. A fine horse, say, or a necklace. Do you beat it and disdain it and leave it in the mud? Or do you take superlative care for it, polish it and watch out for it, because it is so valuable to you?’

He leaned on the despatch box, as comfortable as if he were leaning on the mantelpiece of his drawing room enjoying a cigar.

‘I am a guest in your country. But sometimes, it takes a stranger's eye to observe what the natives do not see. Go to Manchester, or Birmingham or any of your other great manufacturing cities. Visit the factories. You will see men and women labouring there twelve, fourteen, even eighteen hours a day, in conditions that would make my father sick to his stomach.’

‘At least they are free – and paid,’ said Fairchild.

‘And what use is freedom, if it is only the freedom to live in a slum until you are worked to death? What use is a wage if it does not buy you enough to eat? The only thing that money buys is ease for the consciences of the mill owners. Whereas at Windemere, every one of our people enjoys three square meals a day, a roof over his head and clean clothes to wear. He never has to worry if he will eat, or who will take care of his family. I promise you, if any English loom worker or coal miner glimpsed life on the plantation, he would swap his life for that in a second.’

On the opposite bench, Fairchild had risen. ‘A point of order?’

Mungo gave a languid wave to allow it.

‘Even if we accept this preposterous picture of African slaves holidaying in some benevolent paradise, the gentleman is rather coy about how those persons came to his country. Will he admit that the slave trade is nothing but a trade in suffering? Or will he try to convince us that millions of Africans willingly took a pleasure cruise to America to enjoy the benefits of the climate?’

That drew a laugh. Mungo smiled broadly and enjoying the joke with everyone else.

‘The slave trade has been illegal in Britain and America for over thirty years,’ he said. ‘Whatever our fathers and grandfathers may have done, it is finished now.’

Fairchild’s face flushed. He tried to calm his emotions – gentlemanly behaviour in these debates was prized just as much as sound arguments – but he could not hold them in check.

‘You know perfectly well that despite our government’s strenuous efforts, traders continue to flout the law by smuggling blacks out of Africa under the very noses of the Royal Navy.’

‘Then I suggest you take up your complaint with the Royal Navy.’

‘I shall,’ said Fairchild. ‘Indeed, I may inform the House that as soon as I have completed my degree I shall accept a commission in the Preventive Squadron of Her Majesty's Navy, intercepting slavers off the coast of Africa. I will report back from there as to the accuracy of Mr St John’s picture of the delights of slavery.’

There were cheers and approving applause. Up on the ladies’ balcony, more than one corset strained with admiration of Fairchild’s manly virtue.

‘If you are going to Africa, you can report back how these negroes live in their own country,’ Mungo shot back. ‘Hungry, filthy, ignorant: a war of all against all. And then you can go to America, and say if they are not better off there after all.’

He turned to the room.

‘My virtuous opponents would have you think that slavery is a unique evil, a moral abomination unparalleled in the annals of civilisation. I urge you to see otherwise. It is merely a name for what men practice wherever they are, whether in Virginia or Guinea or Manchester. The power of the strong and wealthy over the weak and poor.’

Fairchild had started to object again. Mungo ignored him.

‘That may be an awkward truth. But I say to you, I would rather live my life a slave on a plantation like Windemere, than a so-called free man in a Lancashire cotton mill. They are the true slaves.’

He looked around the tight-packed chamber. Only the briefest glance, yet every person in the room felt that his gaze had settled directly on them. On the ladies’ balcony, the fans fluttered faster than ever.

‘Perhaps what I say offends your moral sensibilities. I will not apologise for that. Instead, I beg you to look beyond your distaste and examine the proposition with clear-eyed honesty. If you sweeten your tea with sugar from the West Indies, or smoke Virginia tobacco then you support slavery. If your father owns a mill where they spin Alabama cotton; or a bank that underwrites the voyages of Liverpool ship owners, then I say again you support slavery.’

He shrugged. ‘I do not judge you. I do not lay claim to any superior moral virtue. But the one sin of which I am wholly innocent is this: I will not play the hypocrite and weep false tears for the choices I have made. If you agree with me, I urge you to support the motion.’

He sat down. For a moment, silence gripped the room. Then, slowly, a wave of applause began from the back and swelled until it echoed around the chamber. The undergraduates might not agree with his politics, but they could appreciate a bravura performance.

Though not all of them. As the applause rose, so too did an answering barrage of boos and catcalls. Yells of ‘murderer’ and‘blood on your hands’ were heard.

Mungo sat back, revelling in the discord.

Finally he bought a little packet of bright blue pills from a girl with pink hair, because E wasn’t heroin and didn’t count.
Books
1 year ago

The hotly anticipated second novel by Petina Gappah, 'Out of Darkness, Shining Light', follows the epic journey of Dr Livingstone's corpse - and the ...
Books
2 years ago