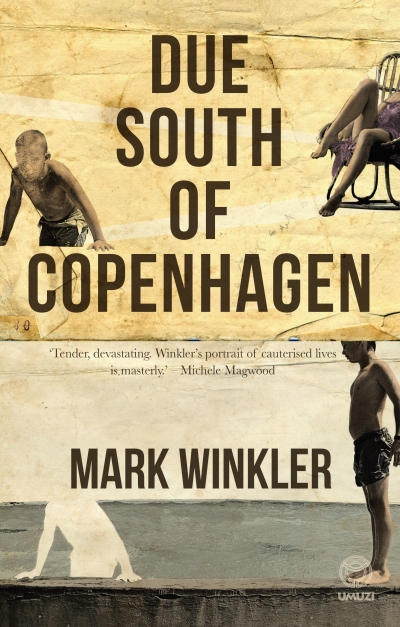 One of the most impressive things about this novel is the spare but beautiful prose and clever structure that allow Mark Winkler to tell his complex story in just 200 pages. When on the first page he describes the rounds in the ammunition belt of a gun as being “thick as a butcher’s fingers”, you know you are in for a treat.

Max Fritz grows up in a dusty Lowveld town where his father owns a run-down petrol station. The novel opens with him, now on the point of retirement, clearing out his office at the local paper where he has been the editor. The paper is now about to go online.

He finds an old photograph, dating back to his days of military service on the Caprivi Strip during the border war, but he is really looking for some memento of a friend from his school days, the angry Karl Udengaard. Max has just received a letter from Denmark, telling him of Karl’s suicide.

The letter and the photograph trigger Max’s memories as the novel goes back and forth between his school days, his sad adolescence, his military service and his later solitary life, back in the tired town where he was born. Slowly the influences that have shaped his existence are laid bare.

A large portion of the novel deals with the currently unpopular topic of white teenagers being sent off to fight in a dirty war, controlled by a dirty government.

Winkler makes no excuses for Max and his contemporaries, but shows, sometimes with grim humour, the sheer horror of what they were expected to do, what they did and the gulf of incomprehension that grew between them and the civilian life from which they had been dragged away.

Due South of Copenhagen is a novel about memory, how it plays out and how it ambushes you, making you realise there may have been a choice – stop or continue – at many decisive moments in life. But was that choice really there at the time? It is also a compelling picture of small town life with all its secrets and banalities.

Beautifully written, it is a bleak but compelling book.

A man's life through a small prism of light

Mark Winkler's new novel is a powerful story of memory and the indoctrination that created a generation of teenage soldiers, writes Kate Sidley.
Books
1 year ago

One day, when Hulk Vermaak was beating me up, again, for being a stinking Kraut, the new boy Udengaard came up and brained him with a hockey stick.
Books
1 year ago

What? You’ve got somewhere better to go? Rather stay home with this stockpile of fantastic new books.
Books
1 year ago