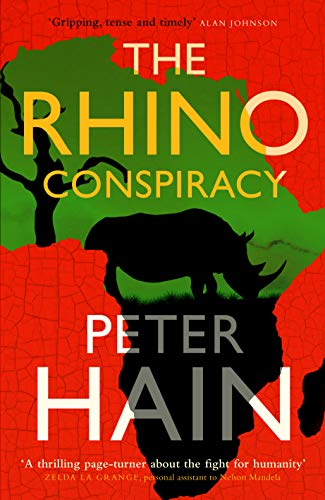 Peter Hain's 'The Rhino Conspiracy' is an epic tale of corruption, collusion and courage set in contemporary SA.
Image: Supplied

In the South African veld, poaching gangs are resorting to extreme levels of violence to hunt down valuable rhino horns. Battling to defend the dwindling rhino population, a veteran anti-apartheid freedom fighter is forced to break his lifetime loyalty to the ANC as he confronts corruption at the very highest level.

The veteran and his "born-free" colleagues are hell-bent on catching the poachers and exposing their trade but first them must establish the truth. The stakes are high.

Has Mandela’s "rainbow nation" been irretrievably betrayed by political corruption and cronyism? Can the country’s ancient rhino herd be saved from extinction from state-sponsored poaching?

In Zama Zama Game Reserve, one of the two guards assigned to constant protection of the rhino lay prone over a large rock, blood congealing around a gaping knife wound. Of his partner there was no sight nor sound.

In no time at all swarms of white-backed vultures began scavenging greedily, hissing and clambering over each other to gorge a share of the meat. Soon they were feeding right inside the carcass, tearing the flesh away. They bobbed from one leg to another, their wings spread so that they controlled the carcass area.

But then the lappet-faced vultures started arriving. Known as the ‘king of the vultures’, the largest and most dominant, they were renowned for eating the toughest remains, able to gouge deep inside at even the strongest tendon or ligament. The vultures would feast for days on the wretched hulk, jettisoning their white excrement all over what had once been such a proud, regal specimen.

Later hyenas would arrive, as would the occasional wild dog, sneaking a snatch of flesh between the larger, more aggressive animals. Hyenas, Africa’s must proficient big carnivore, the only mammal able to eat and digest bone crushed in its fearsome jaws, were recognised by conservationists as being vital to the ecology of nature, seeking out sick or weak targets and efficiently disposing of carcasses to control diseases like anthrax in a natural way.

What had once been a rhino soon reeked, casting an increasingly obnoxious pall over the vicinity, flies buzzing, flesh disappearing, maggots gobbling at the intestines until eventually it would be just a gaunt shell of bones drying and turning grey-white as the sun beat mercilessly down.

Rhinoceroses are some of the largest remaining members of megafauna, their lineage dates back to 50-million years ago, and South Africans and ...
Books
6 months ago

"Rhino genocide," Ranger Isaac Mkhize labelled it when he finally arrived at the scene, disconsolate yet also determined, a cold fury beginning to burn inside him. But how on earth had it happened? Zama Zama’s security was so tight – or so they had thought. It seemed so clinical. Why? How?

"Must be an inside job," he muttered to his ranger partner, an equally depressed and furious Steve Brown, as they scouted around the carcass.

They discovered the dead guard and immediately radioed in to the camp headquarters to send out searchers and trackers for the guard’s partner and the poachers, whose footprints they could see disappearing into the scrub.

Later, Zama Zama managers and rangers met for a war council. The charismatic Owner went through the options. Different incentives for the guards?  Maybe. But you could never outbid the poacher syndicates. Rhino poachers could earn anything from R15,000 to R80,000 for just one consignment of horn – between five and 25 times the normal pay of guards.

Extra guards? Maybe, but that also increased the chances of having a bad one. Hiring a private security company? Out of the question, because his budget would not stretch to the huge extra cost: the priority was new fencing for the vast enlargement he’d recently negotiated with local chiefs, especially to cope with new babies in the elephant herd and get access to a new river tributary, because water was getting scarcer with climate change.

Mkhize was clear, insisting to his colleagues: "We must have specialist reinforcement, maybe a sniper, something like that."

"A sniper?" the Owner pondered the pros and cons with the group. "You’re all trained to shoot. What would a sniper add?" he asked.

"We are trained to protect animals and guests on foot. Of course we have wounded and sometimes killed poachers. But killing people is not our profession. You need a specialist in that. Someone cold and calculated for the job," Mkhize insisted.

He paused: "It’s war out there. These bastards have AK-47 assault rifles. To get those rhino horns they will murder anybody, destroy anything. We’ve lost some good people shot by rhino poachers. It’s a war zone. Once they kill all the rhinos, that’s it. It’s a race to save the species from extinction."

A few days later Mkhize was in the camp, pottering about, chatting to guests over early evening drinks while dinner was being prepared, other rangers joining in, setting tables and serving at the bar.

KwaZulu-Natal's Hluhluwe-iMfolozi Park (HiP) will receive crucial technology to aid in the fight against poaching.
News
6 months ago

He urged the guests to be silent, to listen to the magic of the bush as it settled down, ready for the fast-arriving night. A heron, silhouetted against the deep orange and yellow sky flew overhead, with cries of jackals, the bustle of nestling guinea fowl and the call of a fish eagle echoing away, and a hypnotic sunset of changing colours, orange, red, purple, pink and yellow blending successively.

His phone rang piercingly, and the guests laughed that it was he, not they, who had transgressed. It was the Owner, and Mkhize sheepishly stepped immediately away from the sudden chatter to be out of earshot.

"We’ve had the post-mortem report on our dead rhino. The bullet was from an R1 rifle, you know the South African-made semi-automatic combat rifle similar to the AK-47. I was told informally it was of a calibre and a type that means it was almost certainly South African army issue, maybe from the apartheid days fighting ANC guerrillas. Could well be one of the Boere mafia guys. Not just a local poacher outfit. So all the more reason to be careful.’

The rhino horn had been placed in a cloth sack and moved systematically away from Zama Zama by the poaching gang. Within hours of the kill, the burly, bearded white gunman and his two black collaborators – the missing guard and the panga man – had climbed through a fresh gap they had cut in the perimeter fence and begun hiking fast to the nearest road. The gunman, not as fit as in the old days, puffed to keep up, especially with the guard, who was terrified.

When they eventually reached the safety of a waiting four-wheel drive, the group arranged to separate. The Africans were paid off in cash, driven away and dropped off, each at a different point. The horn remained in the back of the vehicle. Later it would be left to dry out to expunge the putrid stench of rotting flesh at its base where it had been hacked off.

From there it would be transported to the black markets of China, Hong Kong, Taiwan, Singapore, Vietnam, Laos and Thailand, where the horns could be more valuable even than gold and platinum, heroin and cocaine.

The horns are ground down into powder and used as a party drug – for hangovers, aphrodisiacs, drug substitutes and other nefarious pursuits.  The grotesque fetishes of rich elites in East Asia have created a voracious demand. It’s their money that feeds the crime syndicates, that buys off the politicians, that pays often poor African poachers, that kills game rangers by the hundreds.

What would drive a man to “smuggle” rhino horn back into Africa at great risk to himself?
Books
1 year ago

The Covid-19 pandemic has brought an unexpected benefit to rhinos and other wildlife - a decrease in poaching during the first half of the year.
News
6 months ago

Former anti-apartheid activist Peter Hain returned to SA this week to testify at the Zondo commission into state capture.
Opinion & Analysis
1 year ago
Next Article