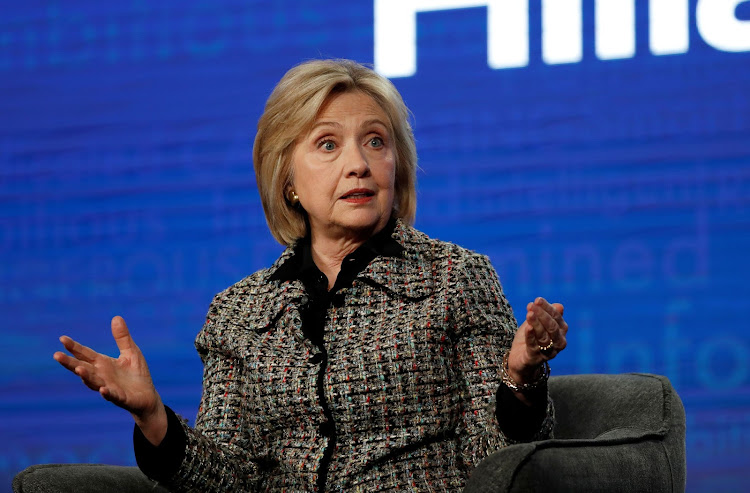 PRURIENT FANTASY 'State of Terror' by Louise Penny and Hillary Rodham Clinton will be published by Pan Macmillan in the UK in October.
Image: Mario Anzuoni/File Photo/Reuters

Pan Macmillan is proud to publish a novel written by Hillary Rodham Clinton and Louise Penny.

A unique collaboration by two long-time friends and thriller aficionados, State of Terror will be published on October 12 in the US jointly by St Martin’s Press and Simon & Schuster, and in the UK and globally by Pan Macmillan.

The story follows a novice US secretary of state who has joined the administration of her rival, a president inaugurated after four years of American leadership that shrank from the world stage.

A series of terrorist attacks throws the global order into disarray, and the secretary is tasked with assembling a team to unravel the deadly conspiracy, a scheme carefully designed to take advantage of an American government dangerously out of touch and out of power in the places where it counts the most.

This high-stakes thriller of international intrigue features behind-the-scenes global drama informed by details only an insider could know.

“When it was suggested my friend Hillary and I write a political thriller together, I could not say yes fast enough,” says Penny.

Rodham Clinton says: “Writing a thriller with Louise is a dream come true. I’ve relished every one of her books and their characters, as well as her friendship. Now we’re joining our experiences to explore the complex world of high-stakes diplomacy and treachery. All is not as it first appears.”

Jeremy Trevathan, Pan Macmillan publisher, comments: “State of Terror is as exciting a proposal for a global thriller as I have ever read. The scope, ingenuity and ambition reflects the strength of the creative chemistry that exists between Hillary Rodham Clinton and Louise Penny. It’s a unique pairing of global real-life experience at the highest level and brilliantly honed narrative craft.

“The characters, their nuanced backstories and the tense, all-too-believable plot leap off the page. This is emphatically a story for our times and we are confident it will establish itself as a bestseller for years to come, read both by thriller fans and by Rodham Clinton’s and Penny’s legions of admirers around the world.”

The podcast was unveiled as Spotify announced it would launch in 85 new markets in the next few days.
Lifestyle
5 months ago

From Salman Rushdie and Wole Soyinka to Pumla Dineo Gqola and Yewande Omotoso, there’ll be no shortage of page-turners on the shelves in 2021, writes ...
Books
5 months ago