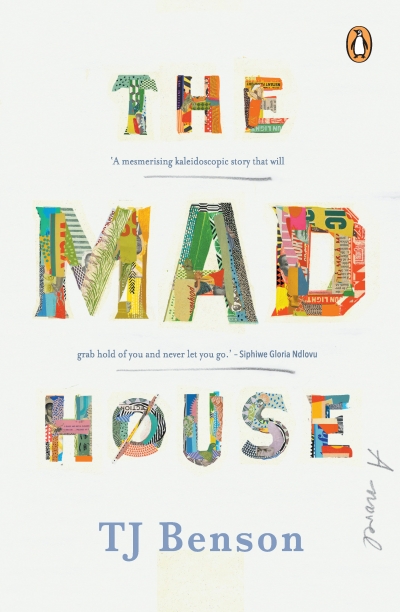 The house at the end of Freetown Street in Nigeria’s Sabon Gari was once a sanatorium for colonists deranged from the heat and insanity of the place. Now it is home to a family whose unorthodox lives unfold into legend: Sweet Mother, an artist, her husband Shariff, a writer and soldier, and their children André and Max.

From the moment his baby brother André is born, Max attaches himself to him, even dreaming the boy’s homicidal dreams. When the wayward André later pulls free from the family to join a death cult, Max must decide how far he will be drawn into his brother’s web.

Serene and beautiful, Ladidi joins the family as a foster child, promising to marry the boy at school who can bring her a strawberry, a fruit she has never tasted. Sensuality blooms, along with loss of innocence amid the death of music legend Fela Kuti, massacres, disappearances, abductions and broken promises.

While Sweet Mother and Shariff battle their personal demons, Max realises you cannot save your family. But can you ever escape them?

In his exhilarating debut, TJ Benson conjures up a kaleidoscope of Nigeria. This is the extraordinary tale of five people bound by blood, each searching for a way through.

Lifting André out of the tub for towelling the night before he would leave for America to take his life, Max had told himself comforting things like ‘First thing tomorrow, I’ll send him packing.’ But even then he knew that was a lie; that in any world, any universe, whether during the years of their childhood or years later in Amsterdam, André’s life would always belong to him. He dressed André in his pyjamas and force-fed him yam porridge and put him to bed. He bade his brother goodnight but he couldn’t sleep. He couldn’t silence his curiosity, wondering what it was like to be worried about, to have so much control over people – what it was like to be like his André.

‘You know – your dreaming, your mind. What is it like?’

‘Noise sometimes. Like a radio changing stations. People are talking all the time even when it is night here.’ He turned to Max on the bed. ‘The world is really round.’

Max laughed. ‘Of course it is round. Secondary school geography.’

‘I am serious. I know.’ André’s eyes flashed with hurt from all the ways Max had failed him and his voice grew harsh. He looked away. André didn’t back down this time. ‘Not just from geography. I have experienced it.’

Now it was André’s turn to laugh but he stopped when he saw the seri­ous look on his big brother’s face. ‘How?’

‘How did you do it when we were small?’

‘I never denied it, André,’ Max sighed wearily. ‘I can’t be embarrassed by you; you know this.’

Max took his palm and squeezed. ‘Close your eyes. Let’s go to Amster­dam.’

The night party doesn’t start until the earliest hours of the morning in Amsterdam, when the day is still young. They are young right now. The DJ is driving them crazy right now. They are going to party like the world is about to end right now. Now is all they have. And nobody is going to stop them.

In Nigeria bodies obey instructions yelled out of loudspeakers to the electronic beat of drums: Whine your waist! Shake your baka! Put it on me! It’s TGIF – how dare you bring headphones or a novel or the wife to TGIF? The people here mean business; they know what they want and won’t stop dancing till they get it. So grab any waist, shake it like there’s no tomorrow, and grind until Mama calls.

The cold winds from the ocean can do nothing to those partying on the beaches of Florida. By now they have lost themselves and become heroes and heroines or just people they’ve never met before. Foreign substances guide the music into their blood, due north to their brains, so that they become gods and goddesses of the Atlantic Ocean crashing in reverence before their dancing feet.

A trance rages across Europe like wildfire. The young do not belong to themselves any more. They belong to Stromae or whoever the DJ thinks is better. In the malleability of hypnosis Stromae teaches them the catechism of revolution to a beat. All eyes closed in the sanctity of prayer as their arms flail above their heads to the recaps of corruption, ills of racism and inevitable uprising lubricated with electronic dance music. ‘Progressive house,’ they call it.

Brazilians are partying in Spain. No one can understand this mystery. The men have come because Spanish women are lighter and reflect more neon colours in the night. They are here because Spanish is passed from the tongue without strings attached. They are drawn here by the similarity of tongues and the women cannot resist.

By this time folks in New Orleans have inadvertently slipped back to the African spiritual dance of their ancestors shipped here centuries ago, even though it’s rap music playing. Dazed with sleep and alcohol and pow­er and rage older than their bodies, they clap hands as they find in hip-pop the age-old rhythm, dancing in circles, vessels to the eternal dance of pain, triumph and longing.

You cannot come to the party alone in Rio – are you crazy? Get your shorts, rip open your shirt; it’s hot anyway. And remember to shake! Or be shaken. You don’t have to be a man or woman tonight. Unleash your inner child. You don’t need to understand the Portuguese. Just let the beat guide you. Or the beer. Or the hands. Don’t just stand there, shake!

Clouds of smoke fill the air so the party people in Jamaica believe they are flying. But it’s the weed. They are not yet high, God no, but you should see the smoke. And the colours flashing in the blur of dance. Bob Marley is not dead in the dance halls of Jamaica. Maybe dreads are going out of style but not Bob, sweet Jesus no. So drop your reservations and clothes; they’ll wear you down in Jamaica.

The party ends in Amsterdam just before sunrise. The young spread out of clubs like ants from a hole with the energy of a good night’s sleep. Eyes are crossed, shirts torn and faces caked but they all wear smiles as bright as the sun for they have conquered the night.

When they were back in their bodies on the bed it was already morning and Max couldn’t feel his mind for a long time. His consciousness had been unravelled and seemed to sponge in everything: the porousness of the ceiling asbestos, the sweetness of sugar grains accumulated at the cor­ners of the room … The new day seemed wider than just a day; his idea of it sprawled to see moments of things replicated and begun simultaneously. He saw the cobweb at one end of the wall and thought about the genera­tions of spiders that had come before the one that had spun it.

How much of it was real? Max looked at his brother. Fingers of light from the window fell on his face but he slept on.

Lerato never wanted to join her sister's stupid social club. All those pretentious people spending hours showing off their wealth. To what end?
Books
10 months ago

‘I was just having some fun! I didn’t do anything wrong!’ she shouts. ‘You’re behaving like a whore!’ 'How dare you call me a whore!’
Books
11 months ago