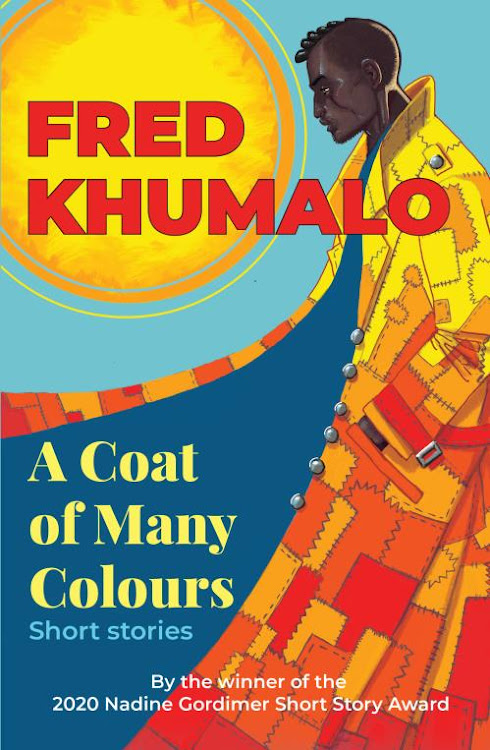 In 'A Coat of Many Colours', award-winning author Fred Khumalo presents a patchwork of various vibrant stories.
Image: Supplied

In A Coat of Many Colours, award-winning author Fred Khumalo presents a patchwork of various vibrant stories befitting the collection’s title. With genres ranging from noir crime to comedy and dark comedy, realism to surrealism, the author’s incredible versatility is on display and readers are treated to true variety.

These stories are populated by characters of different races, ages, classes and genders, adding to the diversity of the collection and reflecting South African society.

A boy plays detective, investigating the case of a goat and a coat; a woman takes revenge; a hit to secure a tender goes wrong; a traditional butcher consumes and is consumed by the meat he slaughters; teenage enmity rears its head in a prestigious school for girls; a man is cursed with an ever-growing appendage; and many more ...

‘What are farms? Have you seen one?’ Themba asks.

Sibusiso considers this. ‘No, no one our age has seen a farm. But my father comes from a farm. He has told us about it.’

Scratching his head, he continues: ‘You see, farms are those far-away places where there are no proper roads, and no TVs, and no electricity. So, at those farms they have these big factories called abaton, or abator, or something like that. That’s where the meat is made, at these abator places. After they’ve made the meat there at those factory-abaton places, they put the meat in big bags. Then they take the big bags of meat on tractors and trucks and stuff, all the way to the supermarkets. And our parents then buy the meat from these supermarkets.’

After this, the boy looks expectantly at Vusi, the superior being and judge of this contest of ideas.

Vusi throws his hands in the air. ‘You’re all so ignorant you make me want to cry.’

One of the men who came in the truck unties the goat from the back of the vehicle. He is a big man. He grabs the goat by one leg and one horn. Lifting it onto his shoulders, he takes the goat all the way to the back of the yard. There he ties it to a tree.

Vusi’s grandpa has come out to supervise the offloading of the goat. Vusi goes to his side.

‘Grandpa, are you going to slaughter the goat now?’

‘May I come join you for the slaughter? I want to see how it’s done.’

‘But, Grandpa, I’m a big boy. I play rugby at school. I’m in the swimming team and I’m the school’s detective.’

‘Yes, I solve mysteries. I find things that have been lost.’

‘So, you’re going to be a real detective like your mother when you grow up?’ The old man is smiling, ruffling Vusi’s hair.

‘Grandpa, I’ve been trying to tell them,’ says Vusi, pointing at the other kids, ‘that in order to eat meat, we must slaughter animals.’

‘Who told you that?’

‘My mother and I don’t have secrets.’

‘So have you seen an animal being slaughtered?’ His grandpa is frowning.

‘No, Grandpa, I have not. But today I’m going to see it done. I’m going to be at your side when you do the slaughtering.’ He pauses. ‘But, Grandpa, shouldn’t you be washing that goat in sanitiser? To prevent it from giving us coronavirus, in case it has the disease.’

‘That disease is not for goats,’ says the old man in a firm voice. ‘In fact, it’s only for rich people.’

Charity, Vusi’s mother, comes out of the house. ‘I heard you, Father. Careful what you say to children. They must take this corona thing seriously, because it is serious.’

Vusi’s grandpa’s eyes crinkle as he grins behind his mask.

‘So, you’re going to let me watch the slaughter?’ Vusi asks.

Vusi’s mother seats the children in front of the TV. She places in front of them three huge bowls. One contains tomato Fritos, another marshmallows, and the last one is filled with peanuts and raisins. Each child has a tall glass of Cream Soda with a scoop of ice cream floating in it.

Vusi is about to attack the food when his mother stops him.

‘First you must go wash your hands.’ In the bathroom she supervises them as they wash their hands the way she taught them. ‘This coronavirus spreads its germs very quickly. You have to wash your hands every time you change from one activity to the next.’

The eight-year-old girl says: ‘But my parents say this crownvayram thing is a joke.’

‘It is a serious disease!’ Vusi cries out authoritatively. ‘Don’t pick your nose, don’t touch your face.’

The children go back to the lounge to eat their snacks. Later, Charity’s cousin comes in her car to fetch the children. Late that night, as Vusi is lying in his bed, waiting for the perfect moment to sneak out and watch the slaughtering, he is startled by a horrid noise from outside. It sounds like the goat.

It’s not a happy sound.

He sits up in bed. But it is too dark in the room. Scarily dark. Shakily, he swings his legs off the bed.

If he wants to find out how slaughtering works, he’ll have to go look now. The noise intensifies and he quickly pulls his legs back onto the bed. He hides himself under the covers. School detective or not, this is one mystery he is no longer eager to solve. The bleating goes on for a while. Trembling, he plugs his ears with his thumbs.

Then all is silent.

In 'A Coat of Many Colours', award-winning author Fred Khumalo presents a patchwork of various vibrant stories befitting the collection’s title.
Books
1 year ago

Fred Khumalo wonders whether we will have learnt any lessons from the coronavirus pandemic in "New World, Old Tricks".
Books
1 year ago

In Nigeria bodies obey instructions yelled out of loudspeakers to the electronic beat of drums: Whine your waist! Shake your baka! Put it on me!
Books
1 year ago