Fiction Friday | ‘The End of Men’ by Christina Sweeney-Baird 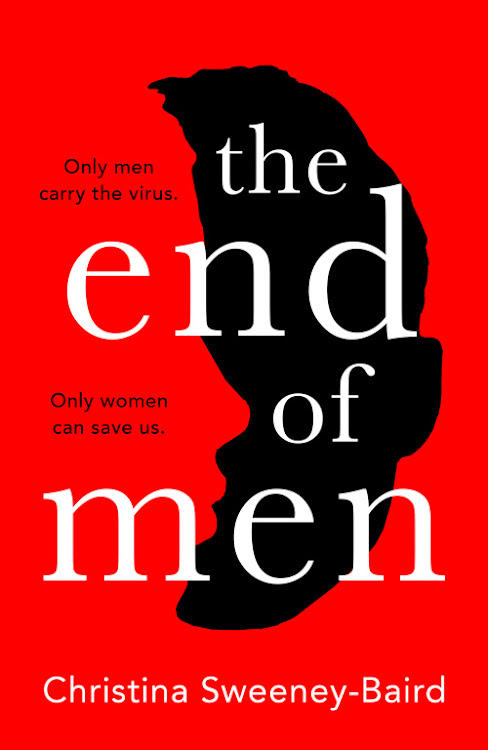 Christina Sweeney-Baird's 'The End of Men' is a topical and highly-emotive read.
Image: Supplied

Dr Amanda Maclean is called to treat a patient with flu-like symptoms. Within three hours he is dead. This is how it begins.

The unknown virus sweeps through the hospital with deadly speed. The victims are all men.

Dr Maclean raises the alarm. But by the time the authorities listen to her, the virus has spread to every corner of the world. Threatening families. Governments. Countries.

Can they find a cure before it’s too late? Can they stop the end of men?

November is always busy but this is ridiculous. The area around Gartnavel has never shown its divisions more apparently. The ice-induced falls and chesty coughs of Glasgow’s polished, middle-class West End residents appear in A&E in a flurry of expensive highlights, knowledge of different kinds of antibiotics and clipped accents which make clear they want their parents and grandparents to be seen now. The other side of this tale of two cities is liver cirrhosis, chronic poverty and the unglamorous side effects of a life of smoking.

‘It’s another SLS,’ Kirsty, an excellent young nurse, says gaily as she swings past me, unceremoniously plonking a chart into my arms. Shit Life Syndrome. Doctor speak for, ‘There’s actually nothing wrong with you. You’re just really sad because your life is really, really hard and there’s nothing I can do about that.’ I used to try and help, little naive waif that I was. What if they have nobody else? I would think desperately to myself, as I phoned social services seven times in one night until they stopped answering me. As a consultant, my approach is a bit different.

‘Why am I seeing them then?’ I ask. This is a waste of my time – a classic, shit junior doctor task if there ever was one.

‘They’ve specifically asked to see a consultant and won’t talk to anyone else.’ Ah. Unfair as it is, being loud, insistent and generally a pain in the arse will often get you better care in hospital. Not because we respect those kinds of antics. We just want to get you out the door.

I walk into the cubicle, the curtain providing a thin semblance of privacy. ‘What can I do for you?’ I ask in my special chirpy but curt voice that I save for the healthy in my overcrowded, underfunded A&E department.

‘He’s naw well,’ the pasty woman to my left growls pointing at a child who, while bored, looks to be in rude health.

‘What appears to be the problem?’ I ask sitting in front of him. From his notes I can see his vitals are all normal. He doesn’t even have a temperature. He’s fine.

‘He keeps sleepin’ til late an’ he’s got a cough.’ The child has literally not made a sound.

A few harmless questions later and all is revealed. He’s going through a growth spurt and tried a cheeky cigarette on the way home from school with a fellow wayward friend. Somebody call Sherlock, I have a gift.

As I’m waving the sheepish boy and his mother out the door, I hear the ring of the trauma phone. I take the call. A two-month-old child, suspected sepsis. On the way in.

There’s an adrenaline rush when the phone rings for an incoming trauma that even after twenty years as a doctor, I’m never immune to. After forty-five minutes of breathless work stabilising the baby, he’s being whisked upstairs to the ICU. There’s barely a moment to turn around and think before another trauma comes in. This one’s more routine. A road-traffic collision has resulted in some nasty gashes and suspected internal bleeding. That one’s off upstairs to a CT scan within twenty minutes. I’m washing my hands and trying to remember what time my son’s parents’ evening starts when one of my first-year junior doctors grabs me.

She’s babbling about a patient crashing who had been fine and now he’s not fine and help. She’s a mess. I’ve seen it so many times before. She’s only been on the ward for ten weeks and she has a patient deteriorating and she’s panicking. I know I should be respectful and aware of the fact that she’s only a junior doctor and we all have to learn but really, it’s just annoying. I can understand a lack of knowledge and I can tolerate the mistakes made due to exhaustion. But sheer panic in an A&E department is as useful as a papier mâché boat with a trapdoor. It sounds unkind even as I think it but my immediate thought is, she’s never going to be an A&E doctor. If you can’t keep your head screwed on when a patient’s crashing then an area of medicine devoted to emergencies is not for you.

I run with her back to the cubicle. The patient’s wife is standing next to the bed with him, crying. I practically hiss at Fiona to get him into Resus and ask as quietly, and furiously, as possible why he isn’t there already. Even a cursory look at this man and his vitals shows that he’s seriously unwell. Jesus, you don’t even need to look at him. Every machine is beeping in persistent, whining concern.

Fiona says he’s had the flu, and he was fine when he arrived, just fine! She gave him fluids and paracetamol and had clearly hoped that he’d go away after a while, having been convinced that it was in fact, just the flu and nothing more.

By this point the patient is dying. His breathing is laboured with the shallow pant of a body not coping with the basic requirements of taking in air. His skin has the grey pallor of someone whose bodily systems are shutting down and his temperature is climbing higher and higher. There are now seven members of staff surrounding him. Matron is taking his temperature at two-minute intervals and announcing with barely disguised disbelief that it’s climbing this quickly. We strip him and surround him with ice and cold towels. I examine his entire body looking for a wound, an insect bite, a shaving cut, a scratch. Anything that could be causing sepsis. There’s nothing. No rash so meningitis is unlikely.

By this point I’m starting to think he’s past the point of no return. There’s not a huge amount you can do once the organs start shutting down. We catheterise him, give him fluids and oxygen. We pump him full of massive amounts of antibiotics and antivirals to start fighting whatever it is that’s burning him up, we give him steroids for his breathing, we do everything we can. We take bloods to screen for infection and if he can at least survive until we get those back, we can tailor the antibiotics or antivirals we’re giving him but now his kidneys are shutting down. There’s zero urine output – the bag under the bed from the catheter is flapping in the air, depressingly empty. I often tell my friends when they half-jokingly ask me if they’re dying, if you still need to pee, you’re fine.

As I stand back and watch the scene unfolding in front of me, I keep my face arranged in an expression of grave calm. He’s a handsome lad. Dark hair, stubble across his chin, he looks kind. His wife keeps getting in the way, crying and crying, inconsolable. She can see the writing on the wall. We all can. She occasionally shouts at us to do more but there’s nothing more we can do but wait and hope that by some miracle his body will turn itself around. Three hours after he arrived in A&E, the machine we’ve all been waiting for begins its long shriek. His heart has stopped. In an odd way it’s a relief. The tension in the room has dissipated. Finally, we can all do something. Matron starts with compressions. I order for the epinephrine to be given. We shock him once, twice, three times. A nurse has his wife, mute now with shock, in the corner of Resus keeping her upright and away from the bed. The violence of an electric shock is not something a loved one should see if it can be helped. In the effort to bring someone back from death we pulverise them, shock them, try to fight their hearts back into a grudging rhythm.

It’s not working but we all knew this would be the outcome. This is a man whose body has been ravaged by something, but we don’t know what yet. Our arms tire. Matron looks at me questioningly with the paddles in her hands. I shake my head. We have done everything we can and should. To keep going now would be to inflict unnecessary torture on the body of a dead man. After fifty-two minutes I make the order. ‘Everybody stop. Enough.’

‘Time of death, 12.34 p.m., 3 November 2025.’ I leave one of my senior registrars to complete the admin that comes with death and comfort this poor man’s grieving widow. Only a matter of minutes ago she was a wife.

Fiona, my panicking junior doctor, is distraught. It’s the first young patient she’s lost in the department and it’s different when they’re young. It’s never easy to lose a patient but when someone’s eighty-five and they’ve had a long life and suffered a stroke or a massive heart attack, you’re sad but there’s a sense that this is part of life. Death comes for us all and you’ve had a good innings. Godspeed and see you on the other side.

But when someone young dies it’s because something has gone seriously wrong and we have been unable to fix it. The patient was called Fraser McAlpine.

His wife is sobbing over and over again that it was just the flu.

Would the world be a better place if we just wrote men out of the picture?

There’s a wealth of sci-fi devoted to a world without men. Biologically, the species might cope just fine, but other issues may arise, writes Paula ...
Lifestyle
1 year ago