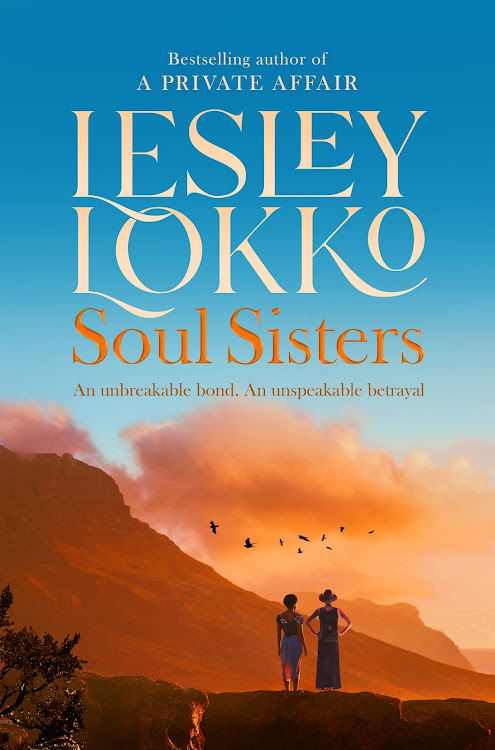 Soul Sisters by Lesley Lokko is a rich, intergenerational tale of love, race, power and secrets which centres on the lifelong friendship between two women: Scottish JenMcFadden and South African-born uKwemisa Mashabane, known to her friends as Kemi.

Since childhood, Jen and Kemi have lived like sisters in the McFadden family home in Edinburgh, brought together by a shared family history which stretches back generations.

Kemi was educated in Britain alongside Jen and the girls could not be closer; nor could they be more different in the paths they take in life. But the ties that bind them are strong and complicated, and a dark family secret exists in their joint history.

Solam Matsunyane is from SA’s black political elite. Handsome, charismatic, charming, and a successful young banker, he meets both Kemi and Jen on a trip to London and sweeps them off their feet.

Partly influenced by her interest in Solam, and partly on a journey of self-discovery, Kemi, now 31, decides to return to the country of her birth for the first time. Jen, seeking an escape from her father’s overbearing presence, decides to go with her. In Johannesburg, it becomes clear that Solam is looking for the perfect wife to facilitate his soaring political ambitions. But who will he choose? All the while, the real story behind the two families’ connection threatens to reveal itself – with devastating consequences ...

All day long, adults came and went, the murmur of their conversations punctuated by the sharp bang of the screen door as it swung to and from. Some brought things – useless things, like goats (in one case) and a pile of traditional Ndebele blankets (in another). All were coming to say goodbye.

Kemi sat with her grandmother on a low stool, sucking a boiled sweet that one of the aunties had given her, listening with half an ear to the adults talking. Most of her attention was elsewhere, taken up with the excitement of being the star attraction, rare in that household of real, and much more important, stars.

She was leaving Rhodesia. The following night, she would board an airplane bound for London in the company of an international aunt. She would have preferred to go with one of her real aunts – Auntie Violet, for example, her mother’s younger sister – but the terms of her mother’s recent house arrest seemed to encompass all adult members of her family, even the ones Kemi didn’t know. She’d memorized the three-letter codes of all the airports on the journey to London – from Salisbury (SAY) to Rome (FCO), and from Rome to London (LHR).

The last part of the journey to Edinburgh would be made by train. Her Uncle Robert would meet her at Heathrow (LHR) and chaperone her to London’s King’s Cross where they would catch a sleeper train to Edinburgh’s Waverley Station. The journey would take almost two whole days.

‘Who is Uncle Robert?’ she’d asked her grandmother. All she knew about him was that he had a daughter the same age as Kemi. Her name was Catriona Jennifer McFadden. Apparently, she couldn’t wait to meet Kemi. Kemi wasn’t so sure. If it were her, she reasoned, she wouldn’t be thrilled at the prospect of sharing her room with a complete stranger, especially not a stranger from halfway across the world.

Her grandmother was oddly silent. She shrugged. ‘He’s . . . he’s your grandfather’s friend,’ was all she would say.

Someone was weeping as she came out of the house, banging the screen door loudly behind her. Kemi watched with detached curiosity as she patted her cheeks dry and blew her nose – loudly – before coming over to where Kemi sat and placing the palm of her hand on Kemi’s head. ‘Poor little thing,’ she said in Shona. ‘So young. All that way. And when will she come back?’

Her grandmother made a strange, half-strangled sound that sat somewhere between a sob and a groan. She brought her own hands up to her eyes, pressing against her lids, but when her fingers fell away, Kemi was relieved to see her eyes were dry. She wasn’t sure she could have borne seeing her grandmother cry.

‘Come,’ her grandmother said, getting to her feet. She wrapped her colourful kanga around her, tucking it firmly around her waist. It was a present from Kemi’s mother, brought back from a trip to Tanzania in the days when Florence Mashabane was still able to leave the country. A bright turquoise background, a red flowered border, and the words Sisi sote abiria dereva ni Mungu printed several times in circular, flowing script across it. ‘It means, “We are all passengers, God is the driver”,’ Florence told her delighted mother.

Now, as a banned person, arrested for inciting resistance to white minority rule under Ian Smith’s government, Florence Mashabane was not allowed to leave her front door, except to drive to the police station every day between midday and two o’clock, to report and record her presence.

‘Come,’ her grandmother repeated. ‘Let’s go inside and see your mother.’ It was a subtle reminder that her mother wasn’t allowed past the swinging screen door.

Across the road, just hidden from view by the hedge, was the unmarked police car that drove slowly up and down the street at any and every hour, now parked under the shade of an acacia tree. Kemi caught the glint of binoculars as one of the policemen trained his gaze on the house. She opened the door and followed her grandmother in. Just before it slammed shut, she turned and stuck out her tongue at him, a childish act of defiance that would have earned her a slap from her grandmother, had she seen it. It made her feel better, just the same.

Inside the living room, her mother sat like a queen on her throne whilst various friends and family members fussed around her. To everyone else, the occasion would be tragic. Her only child, being sent away. A husband in jail down south, her daughter sent overseas to be raised by others, she herself under house arrest. How could she bear it?

Florence’s answer was produced under a smile so serene and beatific it seemed to come from a religious rather than political source. We must all make sacrifices. I cannot exempt myself. Her grandmother’s hand on her shoulder guided Kemi forwards to the upright chair in which Florence sat, her elaborate hairdo, magenta-painted nails and elegant clothing a proud assertion of her identity as a beautiful, powerful woman and her refusal to be bowed. Kemi kneeled down dutifully at her mother’s feet.

The smiles that followed were an acknowledgement that she, too, could be counted on in this family, utterly united in their dedication to the struggle to overthrow white rule. The house and its occupants (save one) were in a fever of anticipation and excitement.

Their African guest would be coming directly from Waverley to 17 Jordan Lane, Morningside, any minute now. Breakfast had been prepared and was being laid out on the dining room table. Claw-footed tureens of creamy porridge stood alongside silver jugs of not one, but three – three? – types of maple syrup; there were bowls of thick clotted cream; silver racks waited impatiently for slices of hot toast. From the kitchen came the scent of frying bacon and the cook’s own homemade sausages.

Mrs Logan stood at the Aga, a huge bowl of beaten eggs in her floury arms, just waiting for the signal. All this for a ‘puir wee African lass’? Jen was in a fever of mutinous jealousy. No one had ever – ever – made such a fuss over her. She wandered upstairs and into her mother’s bedroom. Her parents slept in separate rooms, an arrangement she thought everyone shared. It was only when she was invited to stay the night with Lizzie Macintosh that she noticed her parents didn’t sleep separately.

‘Where’s your mum’s room?’ she’d asked Lizzie, as they crept into the bedroom to look for her mother’s jewellery box.

‘This is my mum’s room,’ Lizzie answered, puzzled. ‘What d’you mean?’

‘Well, where does your dad sleep?’

Lizzie pointed to the double bed. ‘Right there. Where else is he supposed to sleep?’

Jen fell suddenly quiet. It was the first inkling she had that things in her own home might be the exception and not the rule.

‘Why do we have to have her?’ she asked her mother for the hundredth time.

Alice was in front of her dressing table, carefully combing and arranging her hair. She put down the silver-backed hair-brush and turned to face Jen.

‘Listen, I know it’s hard for you to understand, but poor Kemisa hasn’t got anyone. Her dad’s in jail and her mother’s been arrested. Just think what it’d be like if Daddy and I weren’t here. Who would take you to school? Who would cook your tea?’

‘Mrs Logan would,’ Jen muttered sullenly, picking at an invisible thread on her skirt. ‘And Jock would drive me to school.’

Her mother was silent for a few minutes. ‘Well, it’ll be nice for you to have a sister,’ she said finally. ‘You’re always saying you want a little brother or a sister.’

‘Yes, but she’s not my sister!’ Jen burst out. ‘She’s African! How can she possibly be my sister? She’s black! Everyone’ll know it’s a lie!’ Jen’s voice rose to a shout.

‘Catriona McFadden! Just you stop that nonsense right now! How in God’s name did we bring up such a selfish little girl? What does Christ teach us to be? Kind, compassionate, caring, that’s what. Not selfish and mean-spirited. Now, go and brush your own hair and make sure you’ve a clean skirt on. And put a smile on your face. The wind’ll change any minute and you’ll be stuck with that scowl.’ Her mother turned back to her own image.

‘Go on,’ she mouthed at her in the mirror.

‘Go!’ Jen fled. She burst into her room and slammed the door shut behind her. She dropped to her knees beside the bed and folded her hands in prayer.

‘Dear God,’ she began hesitantly. She paused for a moment, summoning up the courage to voice her innermost fears.

We need better tools to measure the quality of life in African streets, writes Lesley Lokko Like it or not, we measure the success (or failure) of ...
News
4 years ago

Rešoketšwe Manenzhe writes about the genesis of her debut novel, shortlisted for the 2021 Sunday Times CNA fiction prize.
Books
5 months ago