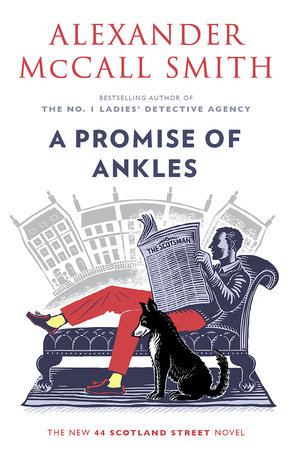 'A Promise of Ankles' is an escapist read with heart.
Image: Supplied

Alexander McCall Smith’s 44 Scotland Street series is the world’s longest-running episodic novel. It appears every day in the Scotsman newspaper, where the wryly comic look at upper middle-class Edinburgh life has a dedicated following.

I happily admit to being a fan. I’m not so keen on some of McCall Smith’s other series, but 44 Scotland Street is a gem. Momentous events seldom happen. Or at least they are, as are events in all our lives, momentous to the individuals concerned but inconsequential to the wider world. In that respect, the series is like a soap opera rather than a novel.

McCall Smith’s characters are mostly modern versions of Everyman – with one important exception among the cast. And they are mostly all thoroughly decent, though all have their faults and foibles. I once heard McCall Smith speaking and saying how he doesn’t really enjoy writing about nasty characters, which may be why the ghastly Irene hardly appears here. Narcissistic Bruce, though he plays a role in making Stuart unhappy, doesn’t take up much space either. But all the usual suspects are there — Angus and Domenica, who are having trouble with a potentially Neanderthal skull, Big Lou, Matthew and Elspeth, Pat, the mysterious Duke of Johannesburg and his nephew James.

The one exception to the Everyman rule is Bertie, the extraordinarily precocious seven-year-old son of Irene and Stuart who is also the linchpin of the series. As always, he is pure delight, and having to a large extent escaped the clutches of his mother who is still pursuing her lover in Aberdeen, he escapes further to his longed-for Glasgow on a four-week school exchange with his best friend Ranald Braveheart Macpherson.

Of course, all this will be incomprehensible to those who haven’t sampled the delights of 44 Scotland Street. Start with the first in the series and move on from there — perfect escapism for difficult times. The novel — if you can call it that — is often laugh-out-loud funny as McCall Smith makes witty asides. Just as often he is profound enough to stop you in your tracks and make you think about subjects such as the essence of love, justice, morality, poetry or moderation. He also handles things such as the trend for wokeism very gently, with subtlety, but very cleverly. Escapism maybe, but with a heart.

Emmanuel Taban was born into rural poverty in South Sudan, one of Africa’s most deprived regions, though richly endowed with natural resources.
Books
1 month ago

Jane Klein was a young journalist editing the women’s pages on the 'Rand Daily Mail" in the momentous year 1976.
Books
1 month ago

A compelling story of life inside the ANC

Mandla Langa’s 'The Lost Language of the Soul' is both a quest story and a coming-of-age novel.
Books
2 months ago