Gently probing society, 'Love Marriage' is much more than a modern comedy of manners 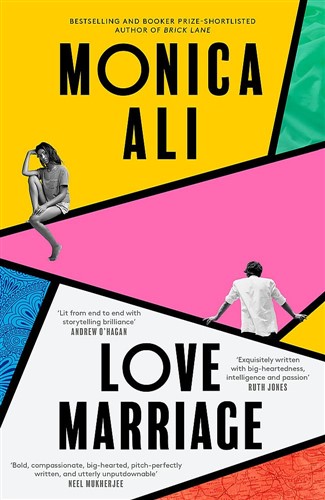 Monica Ali scored a huge success in 2003 with her debut novel, Brick Lane, and here, in her fifth, she returns to the same setting – the multicultural society of London. This time she turns the spotlight on the somewhat troubled engagement of young doctors Yasmin Ghorami and Joe Sangster. Yasmin is the daughter of buttoned-up Bangladeshi immigrants Shaokat and Anisah while Joe has been brought up by his stridently feminist and liberated British mother Harriet.

Things open with the first meeting between the prospective in-laws. As Ali says in the novel’s opening sentence: “In the Ghorami household sex was never mentioned.” Meanwhile, Harriet’s pet topic of conversation is the cultural significance of pubic hair. Yasmin is justifiably terrified of the collision course the two sets of parents seem to be set on and the reader is in for some laugh-out-loud comedy scenes as the mothers-in-law-to-be take control of the wedding planning and become surprising friends.

However, this big sprawling novel is much more than a modern comedy of manners. The two families are not quite what they seem on the surface, and slowly the tone of the story changes, becoming darker and more profound, though it never loses its comedic edge.

Ali offers a number of viewpoints, the main one being Yasmin’s. But we also begin to see the story from other perspectives: those of Yasmin’s brother Arif; Harriet; Joe’s therapist and, eventually, Anisah. For all of them, the narrative and the history are different. Secrets, and if not lies then at least obfuscations of the truth, have become part of their being. Anisah might at first seem to be a stock comic figure, always wrongly dressed, cooking up a storm of Bengali treats and in thrall to her domineering husband. But as the novel develops we learn more and more about her and that perhaps her “love marriage” isn’t quite what it appears on the surface. Both she and Shaokat are fascinating characters who earn our respect and affection even as their flaws and weaknesses are exposed.

On the surface Joe is the perfect, gentle, successful young doctor, respectful of and devoted to Yasmin and very close to the mother who raised him. But here too there is a dark side and another “love marriage” in danger of being derailed. The more Yasmin discovers, the more she sheds the image and lifestyle of the dutiful daughter and perfect fiancée and branches out in different directions, not always with happy results.

Ali confronts racism, religion, sex, the difficulties of being a single parent and other issues, but without preaching or being strident. She has the happy knack of making the reader care deeply about the characters, even when they are at their most tiresome. And she manages to give life to even minor players so that the novel creates a complete, rounded society. If I have a criticism it is that perhaps the ending is a little too neat, too easily reached. But it is a small flaw in what is a terrific novel.

Love on the line and online

Romance has always been one of the bestselling genres, but because readers are craving happy endings there seem to be loads more love stories to be ...
Books
3 months ago