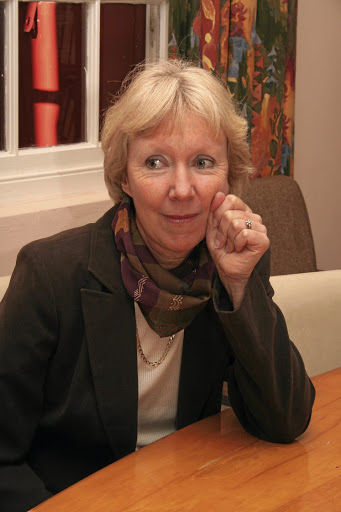 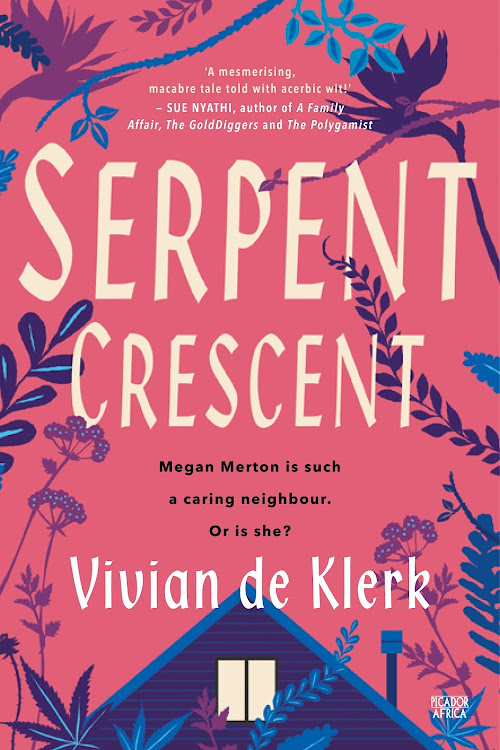 In the crumbling Eastern Cape town of Qonda, retired school teacher Megan Merton covertly revels in the comings and goings of her neighbours on Serpent Crescent. (Think going through their garbage, acts of voyeurism, and delighting in any hot goss: the worse for them, the better).

A self-proclaimed sociopath, Megan is a staunch schadenfreude enthusiast who is as well-versed in the art of garnering joy in witnessing other’s pain as she is in delighting in (oh so subtly) inflicting pain upon others.

When Megan’s neighbour, classics lecturer Dr Elizabeth Cardew, suffers a stroke and is admitted to a local care facility, Megan is entrusted with the keys to house number 9.

Intrigued about what “a victim of a stroke” looks like, Megan often visits Elizabeth which, surprisingly, culminates in a bond between the sociopath and the scholar.

Alternating between Megan’s misdemeanours and Elizabeth’s experience of being treated like an invalid, academic-turned-writer Vivian de Klerk’s second novel is one of deeply-rooted childhood trauma, empathy, the art of communication, friendship, and, yes, schadenfreude.

Your protagonist Megan Merton is a self-described sociopath. How did you go about creating/writing her?

She is a dark protagonist. I did research on sociopaths, especially their early childhood behaviour and growing up. This provided umpteen ideas regarding the sorts of things such children do (experimenting, observing, copying, pretending to feel empathy or remorse). Megan resents the descriptions psychologists have given of sociopaths as callous unfeeling, untruthful, and so on and this fuels her desire to set the record straight. She shows she feels intensely, experiencing envy, pride, anger and especially schadenfreude — the righteous zing of pleasure she experiences when “justice” is done. Once I had imagined the scenarios, from the petty and trivial to the most serious imaginable, including rape and murder, I simply needed to work them into MM’s memories of the people of Qonda, and those who lived in Serpent Crescent. As the author, I enjoyed myself immensely.

As a former professor of linguistics, I relish language in all its shapes and forms. Words are the tools I use to give life to the characters and stories I have in my head. Language is the medium I work in to engage with the minds of readers and draw them in to the imaginary worlds I try to create.

Language is crucially important to both Megan and Elizabeth. Elizabeth only becomes aware of this when her stroke leaves her speechless but fully able to comprehend. I describe the slow and tortuous path she must follow as she relearns to speak, using different neural pathways, and how, in so doing, she learns to appreciate silence and literature, given the time to contemplate meaning. Elizabeth is a linguistic specialist herself, of course, and has investigated the subtle variations among translations of Dante’s works, and this expertise makes her more fascinating to Megan.

Megan is an English teacher, an expert at a different level, and she loves playing with language, revelling in nuances and demonstrating her knowledge of “clever” words such as epicaricacy. Language is her means of telling her own story, which is not easy to tell, even though she tries to make light of some of the darker moments.

The irony is that Megan and Elizabeth have never bothered to communicate before, despite attending the same school and being neighbours for years, yet it is Elizabeth’s discarded lecture notes, her theses and books on Dante (which Megan discovers while snooping) which draw the two women closer together. Megan becomes Elizabeth’s unofficial speech therapist and their unexpected friendship develops through these linguistic connections.

I loved that question.

It is the nine circles that bring them together. Megan wants to pick the brain of an expert intimately acquainted with all the details. Elizabeth goes through them in hospital to reassure herself that her brain and memory still work after the stroke, and realises she is in one of Dante’s circles herself. Megan delights in mentally assigning each of Qonda’s wrongdoers to the most appropriate circle in her righteous search for justice.

Drawing on the previous question, were you always intentional about having nine houses on Serpent Crescent?

I started with eight houses, but I love a bit of structure: nine circles, nine houses so I added Elizabeth as an absent tenant. Of course Megan ranges far more widely in her memories of the people who deserve punishment: the headmaster, the priest, the doctor, the hairdresser, the secretary. However, the reader, I hope, also works at picking the right circle for each of these sinners.

Why is the sociopathic Megan so compassionate towards Elizabeth?

In spite of her claims to the contrary, Megan shows compassion towards several people: her mother (who she purports to have loved); the mother and daughter living at number 4; the old lady living at number 5, so her self-diagnosis is perhaps not as accurate as she makes out. To what extent is Megan to be believed? She worries about Mrs Stuart at number 7, she forgives the town “flasher”. Is she really a sociopath?

The fictional town of Qonda reminds one of Makhanda, the Eastern Cape dorp previously named for a colonialist and famously poor service delivery, donkeys, and so on. Did your years of living and working in Makhanda serve as inspiration for Qonda? How pivotal is the locale to the storyline? Do you think this novel could have been set anywhere else?

Most certainly. I write about what I know, and I have witnessed the frustration and anger of Makhanda’s citizens, watching the steady collapse of the infrastructure of the town. Megan wouldn’t have written her personal account with such fervour or passion had she lived in a first world city where everything works.

Did you have a working title? If yes, please share.

Yes. Schadenfreude, of course, but the word is not readily accessible to all readers.

The experience of schadenfreude fascinates Megan. What does this tell us about her character?

She is analytical and very honest about her feelings. The book is essentially her personal “confession”. While she is careful to record the finer details of what she remembers, she repeatedly makes the point that she might have misremembered, especially when it comes to her baby brother Matthew.

Was it easier to write Elizabeth’s character owing to the academic similarities you share?

I suppose Elizabeth was easier to write, but I got far more enjoyment trying to bring Megan to life.

Did you deliberately employ the first person narrative to write Megan and Elizabeth? Were they initially written in the third person?

Always first person for both of them. It enabled me to capture a sense of authenticity, up close and personal

Finally, how much fun did you have coming up with the name Mike Litoris?

Megan really enjoyed coming up with that one!

"'Not to Mention' is in effect, a message from a daughter to her mother, a roller-coaster ride of memories fraught with mixed emotions."
Books
1 year ago