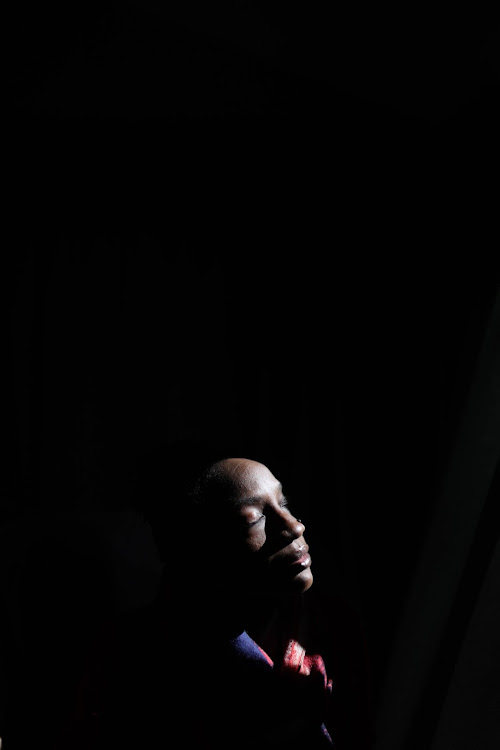 “When the police officer called to say her baby was gone, Mojisola had been day-dreaming about her trip to Jo’burg. ‘But I’m coming, I’m literally on my way, she cannot be dead, I’m just around the corner.’ As if humanity knows Death to be mindful of the proximity of mothers. As if Death is reasonable. As if Death says: ‘Oh, since your mother is on the way, in that case, pardon me — I had not realised.’”

These lines from An Unusual Grief reveal some of author Yewande Omotoso’s preoccupations as well as her light touch with weighty subjects.

Her new novel explores motherhood, womanhood, daughterhood, sex, identity, desire, life, loss, marriage and friendship, plus a bunch of other things along the way.

Mojisola is a Nigerian expat trying to discover more about her daughter Yinka’s last year in Johannesburg. She conducts her investigation from Yinka’s Midrand flat while avoiding pleading calls from her husband in Cape Town and making new friends, including her Afrikaans landlady, a cat, an online dating app, a hardware-store owner and a supply of weed.

Omotoso was pregnant with twin boys (who will turn two in August) while giving birth to this book.

“My big push was to get the writing done before the twins arrived, and I just about managed,” she says.

The novel was conceived well before the human babies, however. Omotoso started writing Mojisola’s story in 2016 and it was in final-edit stage when she was on the path to becoming a mother herself.

For the many sensitive observations of pregnancy and mother-daughter relationships, she relied on memories of her own mother, who passed away when Yewande was in her early 20s, as is deceased daughter Yinka in her novel.

“I have wanted to write about that, but I’ve always thought it’s too close,” says Omotoso. “so I inverted it — made it about a child dying and a mother surviving — to give me more creative room to tell a fictional story that is still anchored in the reality of a difficult mother-daughter relationship.”

Omotoso mined her own bereavement for the heart of Mojisola’s grief for her daughter, and her desperate desire to know more about her.

In some ways, the absence of Yinka becomes the space in which Mojisola finds herself. The book flips elegantly back and forth between the mysteries of her present and the significance of her past, which has its own secrets to reveal.

“Mojisola is the star of her own exploration,” says Omotoso. 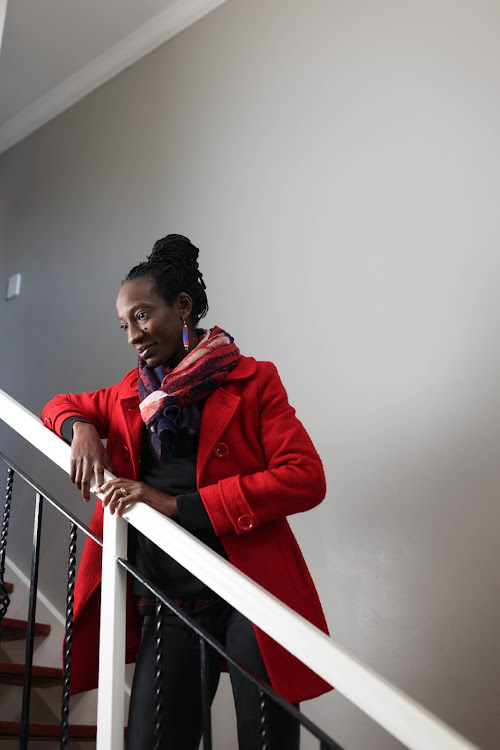 Like all the best novels, this one went through many versions. Omotoso said for some time she avoided the cause of Yinka’s death, and in some drafts it was not clear how she died.

“In some ways I felt it wasn’t my place to write about a young person who takes her own life,” she says. “It gave me pause, I was hesitant, although I don’t believe in rules about appropriation or not being allowed to write about certain things. I don’t know any writer who would endorse something like that but it took time to give myself permission to write it, and I’m glad I did. Fiction is the perfect place to examine some of the hardest things. Fiction is such an amazing medium through which to remember our humanity, to become human and to see other human beings.”

Despite the bleak event at its heart and the word “grief” in its title, the book is frequently snort-out-loud funny.

“Mojisola’s mother had encouraged her daughter to pray in English. Auntie Modupe had pointed out that it would indeed be a useless God who did not have at least a serviceable grasp of the Yoruba language.”

While it is firmly and evocatively set in SA, the “Nigerian-ness” of the book is important to Omotoso, as is broadening our sometimes narrow views of identity.

“When I submitted the manuscript, some people weren’t sure where it belonged,” she says. “They didn’t know which hook to hang it on. I had to work really hard to tell a story of a 60-year-old Nigerian woman who was so compelling that readers would want to move with her and her story. That’s a labour we should be doing more: imagining ourselves differently. There is one very conscious line in the book when Mojisola says ‘Can anyone imagine us?’ I really meant that: can we belong, so that people know where to put us, which hook to hang us on?”

Also, without giving away any spoilers, the tale takes a turn that will surprise, delight and perhaps shock readers. 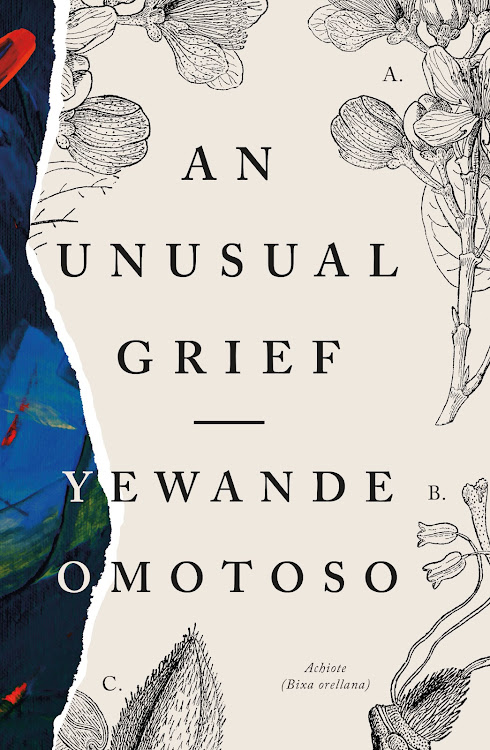 An Unusual Grief is published by Cassava Republic Press and distributed in SA by Jonathan Ball Publishers. Omotoso says: “Many people feel that the book is incorrectly named and the blurb is incorrectly written: they feel that the grief is foregrounded and the lighter elements are ignored. The dilemma was how to hint at things without giving too much away. It was important to me to stay true to the main story; my hope was that the word ‘unusual’ in the title would be a clue that it is not only a story about death.”
Image: Supplied

“I am compelled by life’s power to surprise us,” Omotoso says. “Whether that is being surprised by ourselves or by others. Those are moments when you get shaken up a bit, sometimes gently, sometimes harder, but hopefully to good effect. If it’s strong enough and long enough and you allow it to move you, you sort of become a better person, you can go: ‘Oh, OK, I was wrong, I made a mistake, I thought I had certainty and actually I don’t know, there are things I don’t have sight of. The book is also about blindness, what people can’t see or don’t see, and what they can’t say or don’t say, and the rather painful process of second chances.”

The shaking-up thread in An Unusual Grief left some of Omotoso’s early readers shook.

“I thought it was quite vanilla to start with,” she laughs. “But when the first manuscript was sent out, an editor responded a bit queasily to certain things. I wasn’t offended but I thought it was interesting how these elements made her cringe. Then a good friend of mine who is a writer gave me great advice. She said, particularly when first submitting, often if an editor reacts strongly to something and says it’s wrong, that’s what you should write more. She’s clearly a contrarian but I think she’s right in that the readers are snagging up on something that is distinct and unique, and they’re trying to neaten it because it doesn’t fit. My writer friend was saying, hang on, if you did a bit more work on it, that will probably be what is extraordinary and adds an edge.”

Omotoso decided to play up the element that initially caused a few of her more prudish readers to squirm. “It’s not there to titillate,” she says,” but I think it opened the book up.”

It also required her to explore encounters and experiences almost as interesting and unusual as Mojisola’s. If you’re curious — or if you just love good writing — read this book. 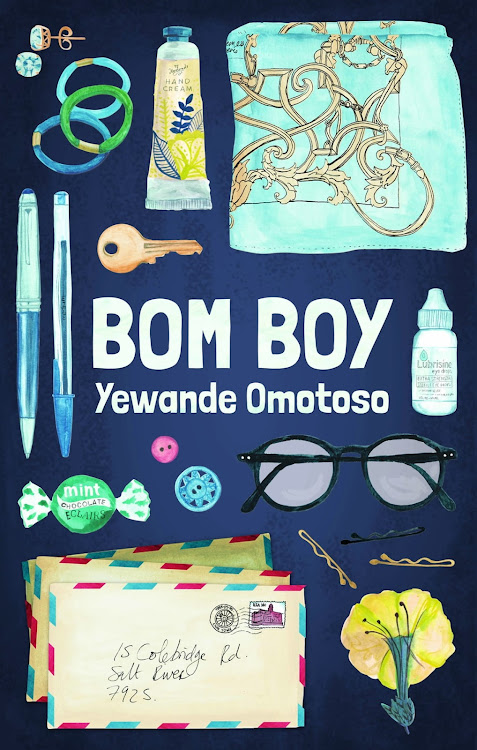 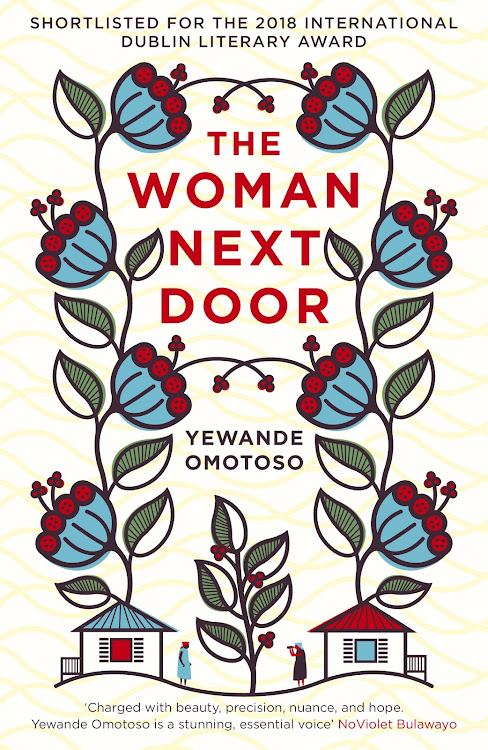 Yewande Omotoso was born in Barbados, grew up in Nigeria and moved to SA with her family in 1992.

She trained as an architect before becoming a freelance writer and novelist, and now works for Greenpeace International while pursuing her own writing projects and nurturing her family in Johannesburg.

Her debut novel, Bom Boy, was shortlisted for the 2012 Sunday Times Fiction Prize and the 2013 Etisalat Prize for Literature.

Her second novel, The Woman Next Door, was shortlisted for the 2016 Sunday Times Fiction Prize, the 2017 Bailey’s Women’s Prize for Fiction, the International Dublin Literary Award and the Hurston/Wright Legacy Award for Fiction. 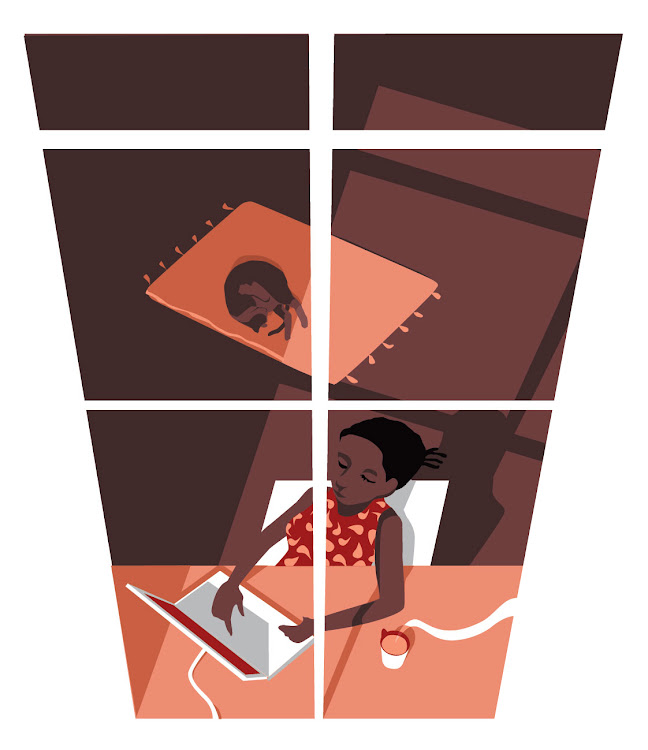 Yewande Omotoso compared the pandemic lockdown to other life-changing events such as the loss explored in her new book
Image: Keith Tamkei

A sense of universal uncertainty

In an essay for the Sunday Times in April 2020 (illustrated with this artwork by Keith Tamkei), Yewande Omotoso compared the pandemic lockdown to other life-changing events such as the loss explored in her new book. She wrote:

“We make plans, and surely there can’t be anything wrong with plans. But there are always those moments, often short, seldom as sustained as this one, that occur in life. Moments that cut through, draw us out of our construction and remind us of the true state of what it is to be alive — to not know and to be seeking regardless.

“The death of someone dear often does it. Deep misfortune. Trauma. Sickness. Not only sad circumstances, carrying a living being in your womb can do it, being present at the birth of a baby, listening to someone knowledgeable explain about the Milky Way holding hundreds of billions of stars, only one of which is our little sun. We see we are small. It frustrates and frightens but can also simply make us go still, leave us in wonder.

“For some perhaps that uncertainty is familiar. For many it might not be. When this moment passes, however far or near in the future that time may be, whatever guise it takes, I hope we retain something of the sharpness of this reality, some of the residue of that feeling.”

Omotoso’s moving novel, An Unusual Grief, leaves the reader with exactly that sharpness of perception.

Wamuwi Mbao talks to Yewande Omotoso about ‘An Unusual Grief’

How do you get to know your daughter when she is dead?
Books
3 weeks ago

Through a lens sharply

Monica Ali talks about her fifth novel with Bron Sibree.
Books
1 month ago

'Surfacing: On Being Black and Feminist in South Africa' is the first collection of essays dedicated to contemporary Black South African feminist ...
Books
1 year ago

If she was in the habit of collecting appellations and had asked, medicine would have told her it was anxiety, postpartum, schizophrenia, mental ...
Books
2 months ago