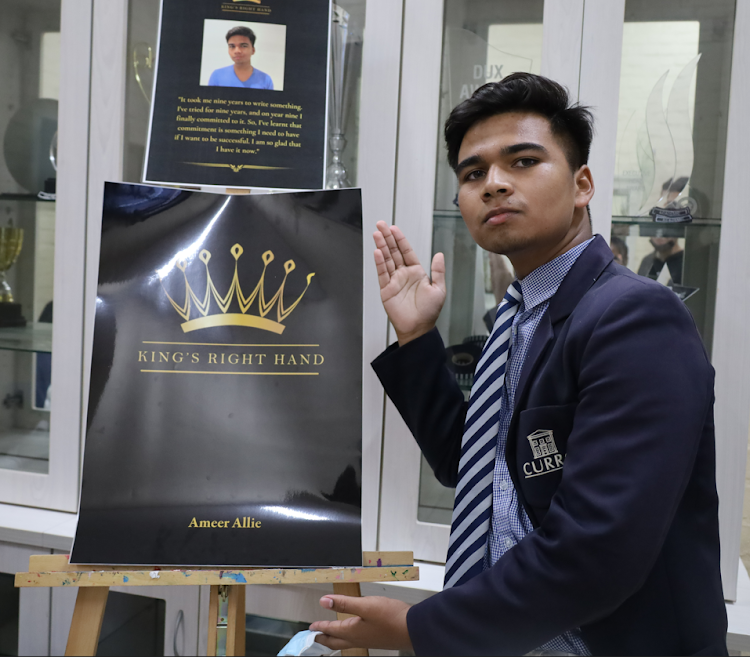 Debut novelist Ameer Kallie is proud to have completed his first book, which he wrote in six months during a hiatus from social media.
Image: Supplied

Described as "[a]n epic fictional story set in the Middle East that has bucket loads of detail and leaves your imagination to linger for a second” by author Yusuf Muhammad, Allie relays more about his debut, in his own words:

You completed The King's Right Hand in six months, attributing this feat to a social media hiatus invoked by your mom. What did this break from screen time prove to you with regards to creativity and productivity?

I suppose I was never really bothered by the lack of online prominence. Less screen time meant I didn’t have to worry about what was in trend or stylish. I could wear my hoodie thrice a week and no-one would care. I liked that (I) was reading and drawing, more so reading. Less incentive to be in front of a screen, more time to do what I liked. I became my own person without borrowing from what I saw online.

Did you write the book with the title in mind or was The King's Right Hand decided after you completed it?

The title was the last thing I focused on. Coming up with names is not my strong suit but I couldn't call it, “Untitled project 1”. I did want it to spark intrigue though, not give away what the story is and grab attention nonetheless.

Your novel explores Middle Eastern politics. What is your stance towards the political climate in the Middle East?

I chose the region to highlight that there are civilised people in the Middle East. It seems all that has been in media in the last decade has been antagonising an entire religion and ethnicity based on the actions of a few groups that have taken their ideologies to the extreme. It has happened before, but not with Islam, yet only the Islamists are televised and it leads to the building of fear and prejudice that I can’t deal with. I don’t want to question my safety if I want to go to a mosque while living in the US, or the UK or France because someone saw on the news that some “Muslims” blew up a building in the name of “Islam”. It paints a dirty picture of a people. A picture that is now used to justify all sorts of injustice against Muslims about the world.

I used the Middle East as a setting to show that there are men and women who are like those in the rest of the world, just with a different belief. The political climate is unstable, but this instability dates back years, be it occupation or oppression. The Taliban was a result of Soviet occupation. Not that I agree or condone what they do now, but there was a reason. Bad leadership and the influence to extreme beliefs affect the entire region, yes, but we can’t generalise.

Are you considering pursuing a degree in political science after you matriculate? Or are you veering towards a literature degree?

I briefly considered political science. That House of Cards feel drew me in. The shady stuff. Dealing, reading between the lines, running the show from behind closed doors. I realised that the real thing isn’t identical, albeit sometimes. I did apply for political science, I think I’d enjoy studying it. I’ll need more time to think it through. As for writing, I don’t want to force myself. If I get burnt out and can’t think I’ll start to hate it and I don’t want that. I like writing, I like reading. I’ll continue what I like doing but at my own speed.

What does it feel like to be a published author at the tender age of 17?

It feels surreal. It’s like I can’t process that I did something to be proud of. I think it’s because I never said it is possible. It’s not a huge feat, many children younger than me have done more by serving their community. But this feels like my little victory. And I want to keep scoring.

Eswatini-born Ntsika Kota, 29, was announced as the winner of the Commonwealth Short Story Prize 2022 on June 21.
Books
1 month ago