Was Jacob Zuma a 'great guy who fell from grace'? Or was he corrupted by the allure of money and power? 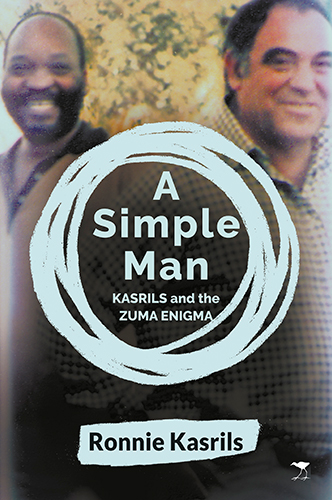 “Why did you decide to include the subtitle?” an audience member asked towards the end of the launch of Ronnie Kasrils’s A Simple Man: Kasrils and the Zuma Enigma at Jacana Media's head office in Auckland Park, Johannesburg in November 2017.

The answer is simple:

Was Jacob Zuma truly this ‘simple man’ people are making him out to be? A working-class hero (in the most simplistic sense); or someone with ulterior motives, who succumbed to the allure of power?

Kasrils’s memoir explores their shared history in exile, and covers his years as minister of intelligence, the overthrowing of Mbeki, and his current views on the state of affairs in contemporary South Africa.

Kasrils’s initial impression of Zuma, upon meeting during their years of exile in the 1980s, is far removed from the one he presently holds; he remembers Zuma as an engaging, pleasant man; “a well-dressed activist”.

The cover image of the book succeeds in conveying the contradictory nature of Zuma  – the smiling young man (with a substantial amount of hair…) can be regarded as the antithesis of the corrupt figurehead we call our president.

It is precisely the flawed nature of Zuma which encouraged him to write the book; to question whether he truly is/was the ‘simple man of the people’.

“Where cometh the flaws?”

Why this book? Why were @JacanaMedia so keen on this? Who is JZ? Really simple man of the people? Where cometh the flaws? - Ronnie Kasrils pic.twitter.com/7bAE5kilPO

Kasrils is intrigued by the nature of flaws, and does not believe that one is born flawless. In A Simple Man he attempts to gauge how Zuma's flaws went unnoticed, and what led to his demise as an immoral, corrupt politician.

Could it be that he was a 'great guy who fell from grace'? Or was he corrupted by the allure of money and power?

A continuous theme of A Simple Man is Kasrils's concern of how South Africa came to be a country in dire straits, with Zuma's role of the demise of the country explicitly stated.

"I want to explain to people who this is man is and how we came to be where we currently are."

Kasrils mentioned Jacques Pauw's recently published The President's Keepers (Tafelberg, 2017), lauding Pauw for writing a book set in the "now", adding that Zuma is "symbolic of the rottenness of this country".

In keeping with the subject matter of Pauw's book, Kasrils declared that Zuma is made powerful by "his cronies and flunkies; this is a country entrenched in corruption".

Despite outright declaring Zuma as a corrupt human, Kasrils does not believe in John Acton's axiom that "absolute power corrupts absolutely"; according to Kasrils power reflects character.

And, no, 'power' does not only apply to those 'in power' (eg. heads of states, CEOs, etc.) It can even be something as simple as your relationship with your domestic worker, he stated.

Zuma's abuse and disgusting misappropriation of power was evident during his rape trial in 2005.

When Kasrils received a phone call from Fezeka Kuzwayo (Khwezi) - who both he and Zuma helped protect in her parents' home during their years of exile in Swaziland - telling him "Uncle Ronnie, Jacob Zuma has raped me", Kasrils described Zuma's defense as "utterly sordid".

His chauvinistic nature was exposed, and he took "so much away from this young woman, deeply disturbed by the events.

"It was a glaring example of this man who showed himself to be a predatory monster - and more."

Another element of Kasrils's book, other than revealing the true nature of Zuma, is what he calls the Faustian Pact.

The book does end on a positive note! Kasrils promises.

"Mass involvement between all South Africans managed to overthrow apartheid," Kasrils said, and he believes that the inequalities currently experienced in the country can be eliminated.

Element of my book (other than revealing ZM) is what I call a Faustian pact: JZ devil who sells soul to Guptas pic.twitter.com/libgXgQgpA

Unlike the Faustian Pact between Zuma and the Guptas, Kasrils firmly believes in the 'People's Pact': a pact between South African citizens which gets into the roots of society, and is based on the ideals of eliminating illiteracy, uplifting our management of resources, and embedded in including the 60% of the population who live in abject poverty.