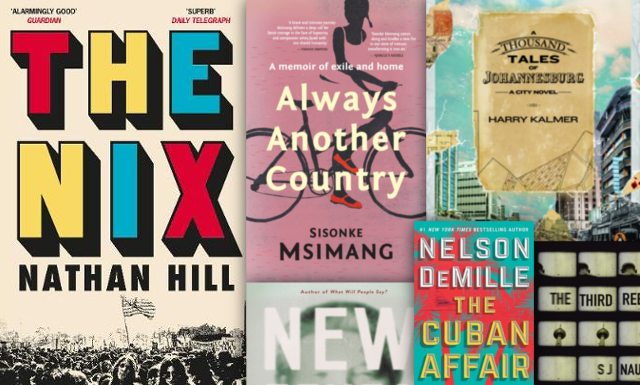 The best books of 2017
Image: The Sunday Times

Looking for book recommendations? Who better to ask than the people who create them. Spoiler alert: The Nix gets most votes…

It is unsurprising that the best local non-fiction titles of 2017 are also the most predictable. They have had public success and rightly so. These include, for me, The Republic of Gupta by Pieter-Louis Myburgh, The President’s Keepers by Jacques Pauw, Always Another Country by Sisonke Msimang, Khwezi by Redi Tlhabi, Reflecting Rogue by Pumla Dineo Gqola and Democracy & Delusion by Sizwe Mpofu-Walsh. They deserve to be read, and engaged, as an anthology that brilliantly captures the capture of the state, the danger our democracy is in, the elusive promise of exile that one day home will be safe again, rape culture’s persistence, our various identity journeys and crises that endure, and the disillusionment of the youth with the neocolonial leadership of the ANC government. Painful but urgent truths.

Marilynne Robinson’s Gilead was a late discovery for me. I devoured all three of her novels, but Gilead took my breath away. The prose alone felt like a religious experience, never mind the themes of belonging, redemption, salvation and grace. The Third Reel by SJ Naudé – a two-fisted exploration of art, politics, loss and love – left me reeling. Naudé is destined for a great career. I first read A Thousand Tales of Johannesburg by Harry Kalmer in Afrikaans some years back. I’m glad this gem of a book will now reach a wider audience. Johannesburg is like a bedeviled wife. You eventually become besotted with her. Kalmer shows you how. Having read Paul McNally’s The Street, an excellent real- life account of life on a particular street in Joburg, I no longer marvel at the depths of depravity in our politics.

The Nix by Nathan Hill. It’s a fantastic, immersive, topical read that spans lives and decades. The basic plot revolves around an underachieving writer forced to face his mother, who abandoned him as a child. But it’s about so much more than that, including American politics. Good Cop, Bad Cop by Andrew Brown is riveting non-fiction that changed the way I think about South African divides: humanity, townships, crime and policing. It should be prescribed reading for every South African – law enforcement and politicians in particular. I ugly cried and ugly laughed on consecutive pages. Dark Traces by Martin Steyn is one of the most gripping, graphic, dark and twisty crime thrillers I’ve read. Set in the world of a cop investigating teenage girls who go missing, this is a book of much evil for poor Detective Magson, and the brave reader.

All The Rivers by Dorit Rabinyan is a riveting story about a passionate love affair between an Israeli Jewish woman and a Palestinian Muslim man that embroils them in all kinds of turmoil. It bravely crosses ethnic and religious “rivers” that divide people. Exit West by Mohsin Mohammed is told through the eyes of a young couple – Saeed and Nadia – who flee from an unnamed city during a civil war. It explores the traumas that migrants and refugees face, without ever descending into rhetoric. To leave their country, they use a magical system of fictitious doors to places around the world, and the story, as it unfolds, introduces us to a new version of “magical realism”.

Hamilton Wende (Arabella, the Moon and the Magic Mongongo Nut)

I’m researching a novel on Ancient Rome and Africa at the moment, so my two best books of the year hands-down are: The Annals of Imperial Rome by Tacitus. Its blood and sex-filled chronicle of betrayal and survival across the Roman Empire is as good as anything in Game of Thrones. My second book of the year is Satires by Juvenal. His descriptions of the excesses of Rome are breathtaking: perfumed wine drunk from conch shells at midnight oyster suppers, dizzy ceilings spinning round and dancing tables. The Roman world without too much politics!

Ray Hartley (Ramaphosa: The Man Who Would Be King)

New Times by Rehana Rossouw brings to life a journalist covering the first years of the Nelson Mandela presidency – and dealing with deep personal issues – with such raw brilliance that it is startling. I was gripped and could not put it down.

Mike Nicol (Agents of the State)

Being Kari by Qarnita Loxton is a funny, insightful novel about contemporary life. The Cape Town setting is a bonus. Queen of the Free State by Jennifer Friedman captures the quizzical voice of a young girl growing up in the 1950s. It’s charming. And then the massive Apartheid Guns and Money by Hennie van Vuuren revealed everything we had expected but were too afraid to acknowledge.

Grace by Barbara Boswell will have you gasping at every turn. Her word use is absolutely delicious and the weaving of the story is close to perfection. I would love a sequel because the protagonist has never left me since I read the book months ago. I find myself wondering how she’s coping. If I Stay Right Here by Chwayita Ngamlana. This experimental fiction had me crossing legs. Shifting. Crying. Triggered.

The Nix by Nathan Hill is a sprawling tour de force of style and story and character, the great American novel of the year. Days Without End by Sebastian Barry is about forbidden love, deprivation and redemption, the poverty and danger of the American 1850s, told through the eyes and vernacular of a teenage refugee from the famine of Ireland. A masterpiece. Midwinter by Fiona Melrose – a story of two tragedies on two continents and its effects on a father and son, who through mutual awkwardness, incoherent grief and rage play out against their attempts at love and family in the deep and muddy earth of county Suffolk in England.

Nick Mulgrew’s The First Law of Sadness is tied for first place with Koleka Putuma’s Collective Amnesia. They are both what I love and look for in fiction and poetry: truth in all its awkward beauty. I also love that you can see these two perform their work, because they’re local, and because they care.

The Girl From Venice by Martin Cruz Smith, who writes sparingly yet beautifully and still manages to produce a gripping page turner. A disillusioned veteran of Mussolini’s dirty war in Africa returns to civilian life as a fisherman in his native Venice, which is still under Nazi Occupation. Into his lap lands a beautiful, rich woman on the run. Perfect. The Cuban Affair by Nelson Demille is a good example of how an author can try something different without alienating fans. Ex Afghanistan veteran “Mac” MacCormick is lured out of retirement to take a Cuban-American woman back to her ancestral home to rescue a store of treasure. Mac reflects Demille’s own experiences and many others who return home glad to be out of a war zone but missing the military and a life less predictable. He paints a picture of a Cuba crumbling under Communism, but also squeezes in enough rum and rhumba to make me want to visit.

The Guardian has supplemented their interactive timeline of Africa’s modern political history with a list of books that they think best tell the ...
Books
2 years ago

After months of extensive reading, careful evaluation and fierce deliberation it is finally time to reveal the shortlists for South Africa’s most ...
Books
2 years ago