A tense novel grappling with the question of human compassion in an apocalyptic society; a powerful collection of lived experiences as an immigrant in the USA; and a fascinating retelling of the Trojan War from a female perspective - here's what we read this week 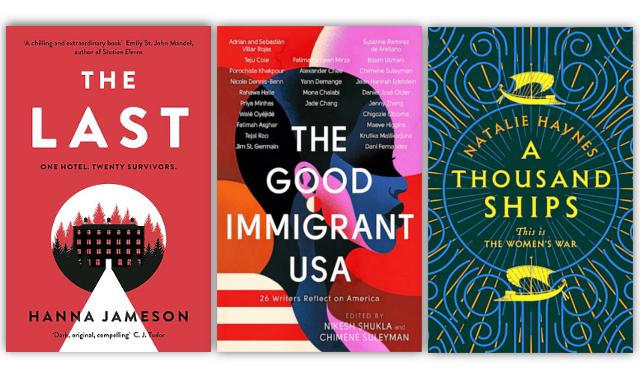 The Last grapples with the question: Who are we when the world goes out? Told through the pen of an unreliable narrator, historian Jon Keller, it tells the tale of 20 survivors in a hotel in Switzerland who witness the end of the world unfold on their smartphones. They're pretty cosy until the food starts to run out and the winter creeps in. Then they find the body of a young girl on the roof, which means there might be a murderer among them. Tense, thought-provoking and highly plausible, except that the story gets lost in the narrator's musings at times. Anna Stroud @annawriter_

In social media activism #WeNeedDiverseBooks raises issues about authors who are already well known and narratives that are always from a white perspective. What about the stories of those living in America as immigrants? The Good Immigrant USA is a wonderful mix of 26 writers who tell their stories: love, identity, fear and discrimination are themes that are familiar, but it also focuses on intimate details that are not in our daily algorithm. The contributors have come together to create something truly remarkable. Not only have they proven that the pen is mightier than the sword, they've laid the groundwork for future immigrants and minorities to have their voices heard. Jessica Levitt @jesslevitt

"A woman who lost so much so young deserves something, even if it's just to have her story told," states the Muse in A Thousand Ships. This is the book that tells the Trojan War from the women's point of view, on both sides of the battle. A fascinating, horrifying and gripping read that is saturated in vengeance and rage, giving strength to voices that have too long been obscured. Tiah Beautement @ms_tiahmarie

Jackie Chan's brutally honest memoir, a thriller with riveting intricacies and a historical novel exploring PTSD during World War 1 - here's what we ...
Books
2 years ago

A powerful narrative of overcoming personal injustice, a thriller exploring the concept of identity, and a Scandi noir set to rival Jo Nesbo - here's ...
Books
2 years ago

A layered psychological thriller, a novel based on a real-life art scandal and a creepy mystery about a dysfunctional married couple
Books
3 years ago