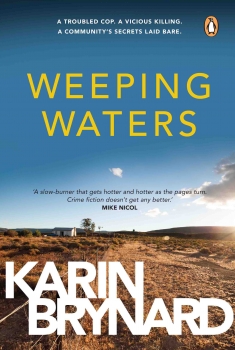 Mzansi's doyenne of sunshine noir's debut thriller (published in 2009) introduced readers to the tormented – and reluctant – cop, Albertus Beeslaar, the protagonist of her subsequent novels, Our Fathers (2012) and Homeland (2016).

Revolving around an anomalous farm murder, Weeping Waters is both a chilling read and a poignant homage to the Kalahari.

Brynard's nomination places her in the company of big names in the global thriller sphere, including Gianrico Carofiglio (Italy), Håkan Nesser (Sweden) and Keigo Higashino (Japan).

Titles eligible for this esteemed award had to be published in any language besides English, and translated into the Queen's Tongue during the judging period. *Cue standing ovation for her translators, Maya Fowler and Isobel Dixon*

Author Karin Brynard in the running for prestigious International Dagger

'Knife' is the brand new offering from the master of Nordic noir crime thrillers, Jo Nesbo.
Books
3 years ago

Our sunshine noir author for December is ... Mike Nicol