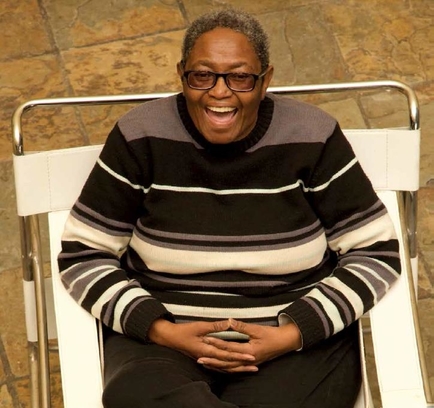 Playwright, author and theatremaker, Fatima Dike, says telling our stories is the most positive way of ridding ourselves of the past.
Image: Noncedo Gxekwa

Why is the kind of intimate sharing of stories that theatre enables such a powerful and potentially transformational experience?

The stage is powerful. The performance is live – it’s happening right in front of you. People are pulled into the story, they are carried by the emotions, they feel they are part of the story that is unfolding. Black audiences in particular are so much a part of what is happening on stage that they talk back and take sides. Generally, white audiences listen and are so quiet that you’d think sometimes they are not listening.

You spent several years in exile in New York, arguably the world capital of the arts and culture scene. We know there is so much that New York offers culturally, but what, in your experience, is unique about South African creativity and storytelling?

South African theatre is fresh: our stories are about the history of our times. The diversity that is South Africa is a never-ending source of topics to write about. Our stories unite, educate and shows us how our future would be like depending on the decisions we make. Our theatre is about us.

You staged work at the Space Theatre in the centre of Cape Town despite oppressive apartheid censorship and you've been working to develop township theatre now, despite a lack of government funding. What do you think South Africans could accomplish if the arts were fully recognised and supported in this country?

Three things. First, education in South Africa needs to be more versatile. Spaces for academic-minded people are available, but most government schools in townships do not offer drama or any of the art forms in their high schools. That means the majority of young people have to go to university to study drama or music. If government schools offered performing arts at high school level, at least young people would receive training earlier and could make informed choices about the careers they wish to follow.

Thirdly, funding from private sources is needed urgently to help to increase the numbers of training spaces. Most townships in South Africa don't have theatres and people struggle to get to white areas to see performances. People who have succeeded need to give back to their communities.

You've worked with many young people to develop talent and encourage creativity. What have been some of your most rewarding experiences?

Having mentored young writers from 2007, I have worked with amazing people. I’ve learnt from them as much as they’ve learnt from me. In fact, the first young person I worked with wrote a play that answered a question I had been asking myself about teenage suicide in black communities. Sinethemba Twani writes in isiXhosa, which is a pleasure for me because young people generally write in English and indigenous languages are dying. I have worked with many actors but there are certain people who leave a memory on you.

Storytelling and theatre can only thrive when there are spaces that are receptive to it. What spaces across the country are exciting and open for independent, up-and-coming theatremakers from a diversity of backgrounds?

Most spaces that exist for performance are in the suburbs. These are wonderful spaces that I love – they are perfect performance spaces. But they are out of reach for people in the townships without cars, especially for evening performances. There's a beautiful theatre at the back of Guga S'thebe arts and culture centre in Langa. It was built by students from Germany when Cape Town was the design capital of the world. It just needs seating and lighting. There is a decent sound system, the acoustics are great but it is sitting there waiting for someone to have mercy on it and give it these final touches. We could have a 200-seater theatre smack in the middle of Langa. There are two tours that come to Langa on a daily basis. There are artists who live in Langa who can use that space. Likewise, I know artists in many townships have built their own makeshift performance spaces and these could be transformed into permanent performance spaces. If only…

Capetonians can see you at the Open Book festival this year, talking about a new anthology, These are the things that sit with us, a trilingual collection of apartheid era memories. In it, you have a piece where you are brutally honest about your feelings about this country. This anthology offers a chance for reflection and healing. Do you think healing is possible through telling one's story, even when that story is painful?

We lived under the most brutal government for 46 years. They divided us, made South Africans into enemies of one another. When we tell our stories, white people do not believe we are still talking about that stuff. It's in the past, forget it, move on, you got what you wanted, haven't you? You have a black president. This book is God-sent, because when I read the stories from people, no matter where they came from, our pain was the same. We need to listen and acknowledge our past in order for us to be able to move on. South Africans need to acknowledge what happened, and telling our stories is the most positive way of ridding ourselves of the past.

Reading and telling stories with your children is a powerful gift to them. It builds knowledge, language, imagination and school success. For more information about the Nal’ibali campaign or to access stories in a range of South African languages, visit www.nalibali.org.

By sharing their memories, the storytellers map the scope of the wider, more difficult conversation about the meaning of justice
Books
1 year ago

'I think people enjoy reading Kaaps because it can be a multi-sensory experience.'
Books
1 year ago

The libraries are eager to receive donated books of good quality.
Books
1 year ago