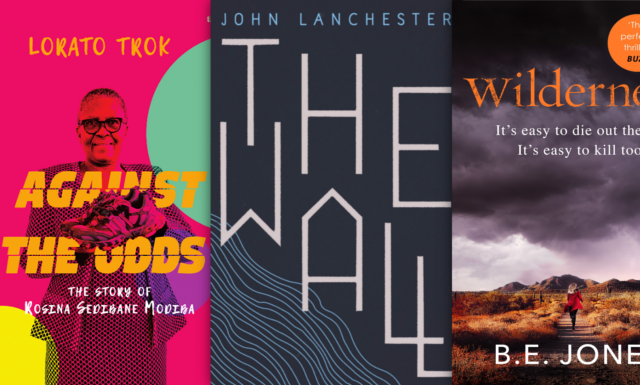 'Against the Odds', 'The Wall', 'Wilderness'.
Image: Supplied

Many powerful stories have been lost in the apartheid legacy. One such story is Rosina Sedibane Modiba. As a young township girl she refused to give up on her dreams, undeterred by the staunch laws imposed by the white government. Despite it being illegal to compete against white people, Rosina made history when she won gold in the 1500m in 1977 – the first black South African female to earn the coveted win. It’s the circumstances around her win that make her victory even more incredible. Imagine laws restricting which areas you can enter, who you can compete against and stadiums filled with white faces, this short biography tells the story of how resilience and determination carved Rosina’s life story. While the book is only 70 pages long, the importance of Rosina’s story isn’t undercut by the length. These are the stories that need to be told - and read - by South Africans. - Jessica Levitt @jesslevitt

“It’s cold on the Wall.” That’s the first thing you know about the massive concrete barrier built around the entire coastline of Britain. In a world “broken” by the combined ravages of climate change, environmental collapse and mass migration, the Wall is the barrier against rising seas and “the Others”: desperate migrants seeking a new life. Conscripted young people must spend two years as “Defenders” guarding every section of the wall against attack and counting the days until their service comes to an end. As a new Defender, Joseph Kavanagh endures the cold and wind on the Wall but also the combination of fear and boredom. Sometimes, he even wonders: would it be exciting if an attack actually came? Although it projects a vision of the future, The Wall is contemporary and relevant as the dystopian themes it embodies are here with us already. - David Lea

Olivia discovers that her husband Will has been a cheating, lying bastard since they arrived in New York from London. He has begged for her to stay with him, yet she knows he has still not told the truth of who he has been having an affair with and the extent of it. She decides to give him a last chance on a road trip across America to visit the country’s national parks. But what Will does not know is that Liv has set secret tasks for him and if he doesn’t perform them, well, loads of people disappear in the wild. Jones delivers a sharp and deeply satisfactory revenge thriller with a likeable anti-heroine. - Jennifer Platt @Jenniferdplatt

'The Dollmaker', 'A Woman Like Her: The Short Life of Qandeel Baloch', and 'The Guest Book' - here's what we read this week.
Books
2 years ago

A soppy love story which turns into an action-filled thriller, a fascinating novel about women subverting societal norms in 18th century England, and ...
Books
3 years ago