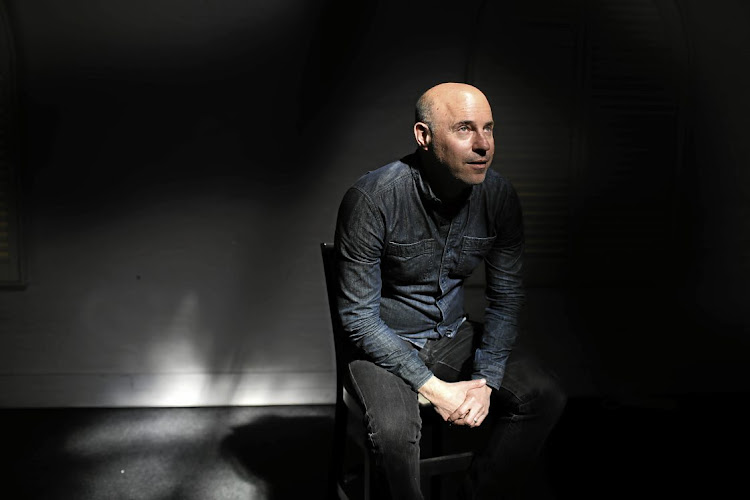 Writer Jonny Steinberg at Wits University, Johannesburg, where he is a visiting professor at the Wits Institute for Social and Economic Research
Image: Alaister Russell/The Sunday Times

Seated in the midst of the gesturing babble that marks lunchtime at the Wits Club, Jonny Steinberg radiates stillness. Dedicated bird-watchers learn to be calm like this, observing minutely while making no movement that might disturb or distract their subjects.

Grecian urns and psychotherapists know this quietness. And so, it seems, do biographer-historians, or at least this one, whose relentless burrowings into the collective unconscious of a country reveal the hidden links that connect people and their actions throughout time.

Steinberg has emerged blinking in the sunlight from a morning spent plumbing the depths of an archive, his natural habitat. He has been reading newspaper articles covering Soweto in the late 1980s as background for a book about the marriage of Nelson Mandela and Winnie Madikizela.

It will be the first time he has written about prominent people, an undertaking that confers liberties as well as limitations on a biographer. 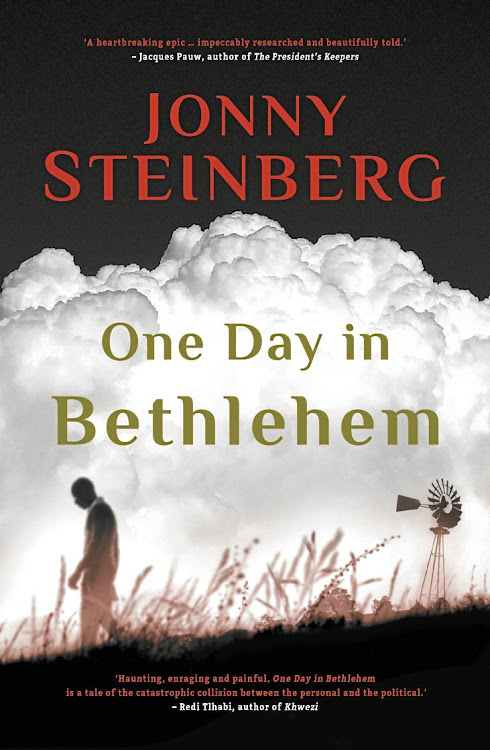 “Writing about famous people is writing about their own constructions of themselves,” says Steinberg.

“And Winnie and Nelson are such consciously constructed people. On the one hand, they self-consciously made themselves into myths, which is interesting in itself, but also there’s so much material that was collected when people were writing hagiographies, human stuff that I think people didn’t know how to deal with. There are archives of amazing material, just sitting there, that was not used because it was difficult to use in that moment — Nelson, in particular, you couldn’t write about as human. They were both extraordinary people, but the idea is to write about them as humans.”

Those who would be chroniclers of truth have an obligation to the people they write about, he says, which increases in weight when that person is not a known figure about whom volumes have already been written.

“With Nelson and Winnie it’s different, firstly because they’re dead and secondly because they’re not ordinary people. When you’re writing about somebody who is not from a world of books and doesn’t necessarily know what it means to be written about, there could be repercussions and your responsibility is heightened.”

The writer’s mind might already be in the grip of his new project, which will take at least another two years to complete, but the eyes of the reading world are focused on One Day in Bethlehem, Steinberg’s just-published excavation of the life and times of Fusi Mofokeng, an unjustly incarcerated man who, after 19 years in prison, is set free into a life he does not recognise.

As with all his subjects, Steinberg was keenly aware of his duty to Mofokeng.

“I feel a sense of responsibility to get things right, and that’s quite a heavy responsibility; also not to embarrass or humiliate the people whose stories I am writing. At the same time, you have a responsibility to your reader, and quite often those responsibilities clash. The reader wants to know more, a reader is hungry for private details, for what’s going on inside somebody. It’s a hard one to balance — who’s your allegiance to?”

Steinberg has walked this wire since he first migrated from news reporting into the historical realm of cause and effect. His first book, Midlands, published in 2002, told the story of a farm murder from the multiple conflicting perspectives surrounding it.

“I was covering farm murders as a journalist and I just knew, with every story I covered, that I had no idea what was going on,” he says. “To really know you needed to know the last 100 years of what had been going on in the land.”

Midlands won the Sunday Times Alan Paton award for nonfiction, as did The Number, published two years later. Here again, a small story turned out to be the tip of a much larger one.

“I went to Pollsmoor prison on a magazine assignment,” says Steinberg. “This was in the context of a country riddled with fear about crime, but with this strange, almost mystical sense of what crime was and where it came from. And here was this system of prison gangs, some of the oldest formations in the country — they arose in the 1890s with their own oral history, their own ideology — and there was this sense that crime had a history; that it spoke. It had its own canons of tradition that were central to what this country was. So it was really about uncovering a hidden history that is at the centre of our history and that nobody knows about.”

The first time somebody tells you a story is barely the beginning. The more you find out from other people, the more questions you have about the story

As to his methods, the first thing he does is spend a lot of time with the person whose story he plans to tell.

“The first time somebody tells you a story is barely the beginning,” he says. “The more you find out from other people, the more questions you have about the story.

“With my last book, A Man of Good Hope, if I look at the way Asad told his story the first time he told it to me, I knew almost nothing about it. It’s in the retelling from different perspectives that deeper truths come out.

“With the new book, my first task was to spend a lot of time with Fusi, and after that to go away and firstly meet with everyone I could find who knew him throughout his history, and then also to read — about the Free State’s history, about prisons … It’s about immersing yourself in as many different perspectives and sources of material as you possibly can, and as you do that the story changes and deepens and becomes more interesting and more elusive.”

He acknowledges that many South Africans, while happy to feast on accounts of the Italian Mafia and Latin American narcotraficantes, shy away from realities closer to home. Not everyone watches the news in disturbing times and not all readers wish to walk through the shadows of crime, disease, injustice and misfortune that afflict Steinberg’s protagonists.

But it is those very protagonists — their personalities, fallibility and gloriously human complexity — that make his books sing. It is through the individual that he guides us to universal truths.

In his third book, Three-Letter Plague, Steinberg jousted with the Aids epidemic through the fractured prism of one man’s experience.

“The conundrum there was this young man who thinks he’s HIV-positive and sees this state-of-the-art medical system being erected in his village but won’t go and get tested,” says Steinberg. “That’s at a very individual level but it’s also about the murkiness underneath; it’s about what we don’t see.”

Steinberg became aware of the unseen and unspoken while at Hyde Park High School in Johannesburg in the 1980s.

“I had this amazing English teacher in grade 9. He’d be sitting talking about books like Chinua Achebe’s Things Fall Apart, and he’d talk and talk and suddenly he’d be talking about SA here and now, in a quite seamless transition. It was like a conversion experience for me. And then my sister, who is four years older than me, was a student activist, so I got very interested in what she was doing.”

He began writing books, he says, because “I was getting a sense that I’d lived in this country all my life and knew almost none of it, despite having spent my late teens and early 20s steeped in political involvement. With the arrogance of youth, I assumed I knew everything about this country, but inevitably in a country like SA you don’t know most of it despite being immersed in it and living in it.

“Rian Malan once put it in a wonderful metaphor where he said that there are these kingdoms of consciousness living side by side, brushing shoulders but never seeing one another. So my writing was really about an exploration of this place.

“I don’t know if this is trite, but the books are all about an attempt to look underneath and see the things that shape who we are but that we don’t know about, almost like our unconscious.”

Being largely absent from SA is a mixed blessing for his writing, says Steinberg. He teaches a master’s course in African Studies at Oxford University, where he obtained his doctorate and where he has lived since 2011. He also retains a presence in SA as a visiting professor at the Wits Institute for Social and Economic Research, and returns frequently. 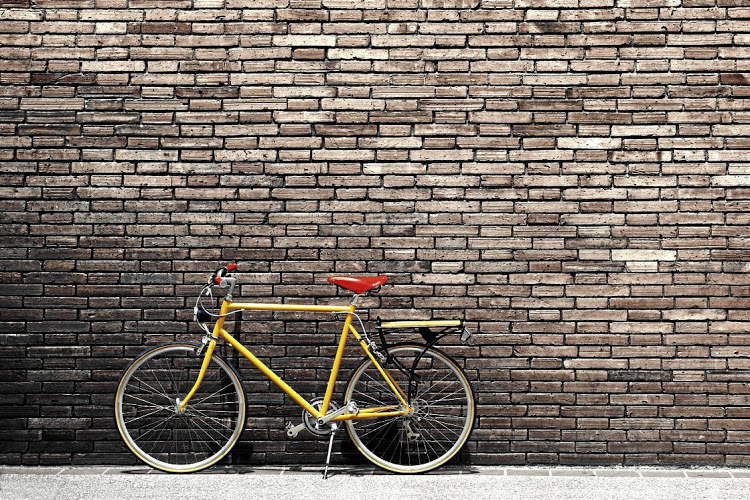 Jonny Steinberg loves that living in Oxford enables him to cycle from home to the college where he teaches. But the bucolic British town is not entirely crime-free. His bicycle was recently stolen from outside work. He reported it to the police - but three days later it was back where it had been stolen from. "Without the lock and the basket, but very neatly put back," he says. "A gentleman thief?"
Image: File Picture

“It’s been a kind of a commuting life,” he says. “The whole time I’ve lived there I’ve been writing about here, and teaching about here there. I come back five or six times a year and stay with my sister, who I’m very close to, so it’s a bit like having two homes. It’s quite a nice balance, but I do worry about writing about here while living there.

“I think it goes both ways. I think my job, which requires me to think about so many different things other than SA every day, is really helpful. The perspective it provides is fantastic, but I sometimes start to feel a bit out of touch. I worry that if you’re not living in a place you stop knowing it. The accretion of daily stuff happening can put blinders on you, but at the same time it puts you really in touch. So I think I write better and worse by not being here.”

His need to write comes from being “very curious about the world and very work-obsessed”, he says. When not reading for work he reads for pleasure, which at the moment is taking him through the first four volumes (a fifth has yet to be published) of Robert Caro’s monumental biography of Lyndon B Johnson.

“It’s probably the most research-intensive biography that’s ever been written but it’s also this literary masterpiece,” says Steinberg. “In nonfiction, and biography in particular, you use all the codes of fiction, all the storytelling codes, but you can’t do the one thing that fiction can, which is get into somebody’s head. Caro never makes that mistake, he never pretends to know what’s going on in Johnson’s head, but you nonetheless feel that you do. And that’s the magic of it. It takes being an astonishingly good writer and doing massive amounts of research.”

Still as unmoving as a statue, Steinberg shines with excitement as he praises a fellow writer. He’d never presume to say the same thing about his own work, but many others do, and should.

"How important is it, morally, to remember what has happened in our own lives?"
Books
2 years ago

I did not know it but I had discovered the peculiar power of literature. Another invented world, it reaches into our own, very real, world, in ways ...
News
7 years ago

From novels to non-fiction - 18 South African scribes respond to which local book published between 1948 and 2019 has made the most significant ...
Books
3 years ago