To celebrate Roald Dahl Day, acquaint or reacquaint yourself with a girl that skrik'd vir niks 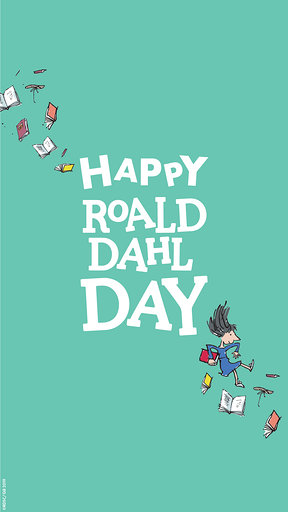 He inspired many a miss (when confronted by a Grandmamma-guzzling wolf) to whip a pistol from her knickers, to “aim it at the creatures head and bang, bang she shoots him dead”. (PS: Next time you bump into Red Riding Hood, please compliment her on her chic Canis lupus coat. And our sincerest apologies, PETA, this is no faux!)

He even stripped a leg of lamb of all innocence in one fell (ahem, fatal) swoop.

From the madcap to the macabre, Roald Dahl entertained bibliophiles of all ages and literary inclinations in a writing career spanning 56 years.

Born in Wales to Norwegian immigrant parents on September 13 1916, Dahl passed away on November 23 1990.

As of September 13 2006 (the date on which the late, great storyteller would have celebrated his first birthday as a nonagenarian), this auspicious day now carries the apt moniker of “Roald Dahl Day”.

Of all Dahl's numerous (and diverse) characters, special mention ought to be made of a singular young girl whose imagination and reading zeal skrik'd vir niks.

Here's looking at you, Matilda Wormwood!

What can be described as an ode to a love of books, the wonder which is escapism via imagination (I mean, wouldn't you rather be trawling the streets of Victorian London with the Artful Dodger than spend the evening watching telly with your oven-baked-chips-noshing-philistine-parents?) and the importance, nay, necessity of children's agency and familial relationships, Matilda (1988) remains a seminal piece in Dahl's children's books oeuvre.

For those of you acquainted with this precocious, passionate prodigy, and those who are yet to dip into a world of the Chokey, Amanda Thripps' pigtails, Bruce Bogtrotter's Gargantua-esque gluttony, limericks, telekinesis and the lovely Miss Honey, we simply say “enjoy!'

The following extract is taken from Matilda by Roald Dahl, with illustrations by Quentin Blake. Published by Puffin and distributed by Penguin Random House South Africa:

The Trunchbull let out a yell and leapt off her chair as though a firecracker had gone off underneath her. And now the children also saw the long thin slimy yellow-bellied lizard-like creature twisting and turning in the glass, and they squirmed and jumped about as well, shouting, “What is it? Oh, it’s disgusting! It’s a snake! It’s a baby crocodile! It’s an alligator!”

The Trunchbull, this mighty female giant, stood there in her green breeches, quivering like a blanc-mange. She was especially furious that someone had succeeded in making her jump and yell like that because she prided herself on her toughness. She stared at the creature twisting and wriggling in the glass. Curiously enough, she had never seen a newt before. Natural history was not her strong point. She hadn’t the faintest idea what this thing was. It certainly looked extremely unpleasant. Slowly she sat down again in her chair. She looked at this moment more terrifying than ever before. The fires of fury and hatred were smouldering in her small black eyes. 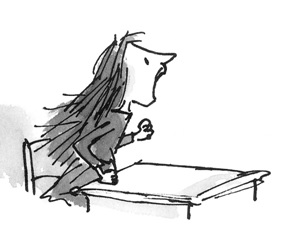 “Stand up, you disgusting little cockroach!”

“I haven’t done anything, Miss Trunchbull, honestly I haven’t. I’ve never seen that slimy thing before!”

“Stand up at once, you filthy little maggot!”

Reluctantly, Matilda got to her feet. She was in the second row. Lavender was in the row behind her, feeling a bit guilty. She hadn’t intended to get her friend into trouble. On the other hand, she was certainly not about to own up.

“You are a vile, repulsive, repellent, malicious little brute!” the Trunchbull was shouting. “You are not fit to be in this school! You ought to be behind bars, that’s where you ought to be! I shall have you drummed out of this establishment in utter disgrace! I shall have the prefects chase you down the corridor and out of the front-door with hockey-sticks! I shall have the staff escort you home under armed guard! And then I shall make absolutely sure you are sent to a reformatory for delinquent girls for the minimum of forty years!”

The Trunchbull was in such a rage that her face had taken on a boiled colour and little flecks of froth were gathering at the corners of her mouth. But she was not the only one who was losing her cool. Matilda was also beginning to see red. She didn’t in the least mind being accused of having done something she had actually done. She could see the justice of that. It was, however, a totally new experience for her to be accused of a crime that she definitely had not committed. She had had absolutely nothing to do with that beastly creature in the glass. By golly, she thought, that rotten Trunchbull isn’t going to pin this one on me!

A South African animation film‚ ‘Revolting Rhymes’‚ has been nominated for an Oscar at this year’s awards ceremony.
TshisaLIVE
4 years ago

Roald Dahl: Gone but not forgotten

The author of children's classics fought with Hollywood and found 007 to be mean, writes Robbie Collin What annoyed Roald Dahl about Sean Connery ...
Lifestyle
5 years ago

The family of Roald Dahl is trying to raise the funds to preserve a hut in which the late writer wrote tales of big friendly giants and magical ...
Lifestyle
10 years ago