Sometimes you will hear people complaining that SA's railway heritage has been destroyed or forgotten. Then along comes a book like 'The Night Trains' and the answer is, how could it be otherwise? 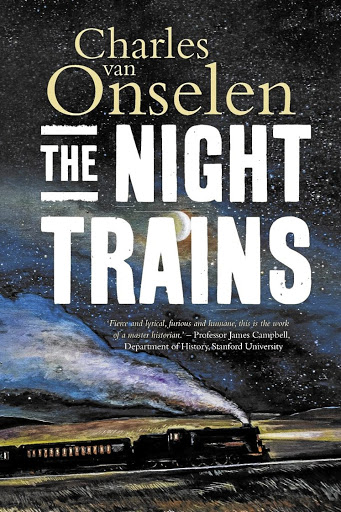 On the rainy night of November 15 1949, a train full of men heading home to Mozambique from the gold mines of the Reef derailed at high speed on the bridge over the Elands River, a few kilometres east of Waterval Boven. Thirteen of the train's 14 coaches departed the rails, six of them tumbling 20m into the river. One of the engine drivers and 62 passengers were killed, with another 106 seriously injured.

The train was one of the twice-weekly "mixed" trains - carrying both passengers and freight - operated by the Witwatersrand Native Labour Association (WNLA) to take mineworkers, including desperately sick men, home from the mines.

That the mining industry at the turn of the last century packed enough clout to operate its own trains on state-owned tracks is a mere detail in a sordid story.

There was, of course, a thorough inquiry into the disaster. Along with placing the blame on the driver of the leading engine for driving too fast, the inquiry exposed the deficiencies and abuses of a train service that had been running for nearly five decades. Not that much changed afterwards.

The "human freights" are the subject of Charles van Onselen's The Night Trains, which shines a light into a dark corner of this country's past.

Van Onselen's frame is tight. The WNLA recruited cheap labour from all over southern Africa, using trains, Douglas Dakota aircraft and buses to bring men from their homes and families to work on SA's mines, but the trains from Mozambique, carrying men locked into boxcars and third-class passenger coaches (to prevent desertions) have a story that transcends the standard narrative of men bought cheaply and sold into the ground.

The story is closely coupled with the Eastern Main Line, the railway that runs from Pretoria to Maputo. The line was built at the end of the 19th century in an attempt to ensure that the then South African Republic would remain free of Britain and its territorial ambitions.

Things might have worked out fine if the republic had remained a nation of farmers, but, as Van Onselen writes, "beyond the usual financial shenanigans that accompanied Victorian railroad construction lay the greatest disruption ever experienced in the region - the discovery in 1886 of the Witwatersrand gold fields".

Until then the railway contractors had been dragging their feet on building the line, but the gold rush spurred the railway's backers to greater effort.

Once it was finished, the Eastern Line was a vital artery, bringing mining equipment and pit props from the port at Delagoa Bay. Its more insidious use, however, was to carry the trains full of men recruited from the Sul do Save - the country south of the Save River - as cheap labour.

The "up" train was numbered 804, the down train 305. Those innocuous names hid a dirty reality. Both trains ran at night, not only because there was less congestion, but also to hide the sight of black men locked inside cattle wagons from people in the towns strung out along the line.

The up trains ran quickly - the mines were hungry.

The down trains, however - whose human cargo invariably included men dying of silicosis, tuberculosis and pneumonia - dragged from stop to stop in a deliberate attempt to get the miners to spend their wages on whatever temptations were on offer.

Sometimes you will hear people complaining that SA's railway heritage has been destroyed or forgotten. Then along comes a book like The Night Trains and the answer is, how could it be otherwise?

It wasn't just about the grim conditions on the trains. Railways built the country but the human cost was great - families torn apart, and people forced from the land, never to go home again - and the debt is still unpaid.

Underworld: Showdown at the Red Lion

The Red Lion Beer Hall stood on the corner of Commissioner and what was then Bezuidenhout Street, in a racially-mixed area of long-since vanished ...
News
6 years ago

How SA lost its position as world's leader in mining, and how to get it back

When South Africa's economy opened up after the arrival of democracy, our mining sector should have been able to build on its world-beating status, ...
Opinion & Analysis
4 years ago

Zimbabwe's 50c-a-ride 'Freedom Train' is back on track

After a 13-year hiatus, National Railways of Zimbabwe (NRZ) has reintroduced its urban commuter train service to Bulawayo
News
2 years ago