A fantasy-mystery-mash-up set in a fabulised capital, Jeffrey Archer's rather disappointing yarn of a new novel, and a beguiling Gothic thriller - here's what we read this week 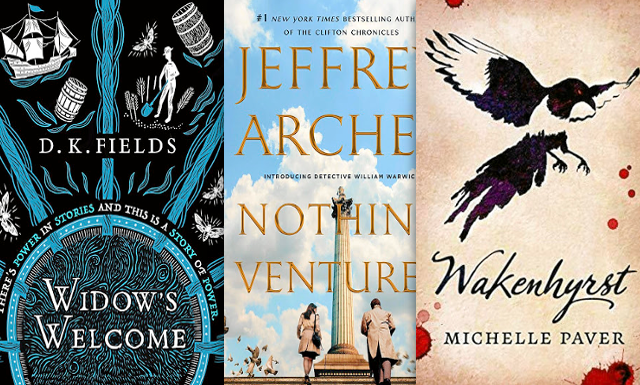 Set in the fabulised capital of Fenest, Widow's Welcome is a fantasy-mystery mash-up centred on the power of stories and their telling. This is a world where politics, fame, and fortune are all outcomes of being able to tell a tale. The novel starts hard, opening with the discovery of a mutilated corpse - someone political, someone important - who, with his mouth sewn shut, was clearly someone who had a story worth telling. With the capital's election mere days away, it's up to the weathered Detective Gorderheim to unravel this mystery, going to whatever lengths she can to figure out who's
silenced this particular storyteller - and why. Dane Bowman

It's hard to feel as though there's much art here, with the cover proclaiming that this is the first of an eight-part series, built around a character in a previous seven-part series (The Clifton Chronicles). But for all its commercial core, this introduction to William Warwick, a gifted young policeman who will work his way up through the ranks as the series progresses, is an enjoyable yarn. "Yarn" seems like the right word, as Archer's storytelling style does feel somewhat dated, with some of his anachronisms - particularly his habit of making his characters regularly spout odd similes in the middle of supposedly conventional dialogue - standing out awkwardly. A pleasing story stumbles a little in order to accommodate an ending that segues into the next installment, but overall it works well as a standalone title. Bruce Dennill @BroosDennill

On the eastern coastal plain of Britain is a region known as the Fens, a bleak, marshy area soaked in superstition and with a long history of hauntings and witchcraft. It is here, in an ivy-clad old manor house, that Michelle Paver sets this beguiling Gothic thriller. Maud is a plain and lonely child growing up here before World War 1, ruled over by a spiteful father after the death of her mother. Her only solace is in the nearby fen and the creatures who inhabit it. But less benign creatures are unleashed when her father discovers a painting of a medieval demon in their graveyard. Fifty years on Maud tells a researcher of the horrors of that summer. Michele Magwood @michelemagwood

'The Dollmaker', 'A Woman Like Her: The Short Life of Qandeel Baloch', and 'The Guest Book' - here's what we read this week.
Books
10 months ago