A gritty police procedural set in Joburg, a riveting space thriller, and a thoroughly researched book on the history of black golf in Southern Africa 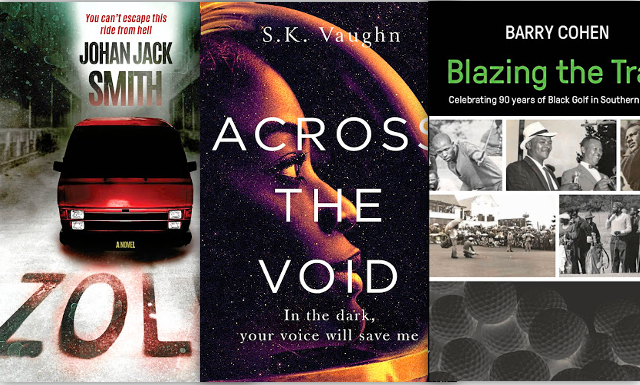 On the streets of Johannesburg, two cops are on the hunt for a brutal serial killer who is making young women his victims. In the rush to solve the case, Capt David Majola and his partner, Warrant Officer Jason Basson, have to deal with their own demons - from family drama to witnessing brutality in their daily lives. The two face unprecedented pressure, especially when the clues point to someone close to them being involved in the killings. With pressure from top bosses and a hungry journalist, Basson  and Majola are in a race against time to find the red-taxi monster who tortures his victims. The author brilliantly describes the streets of Joburg and the nuances of race, gender-based violence and corrupt officials. Zola is a must-read and when you're done, you'll want to read it again to come to grips with each mind-blowing development. Jessica Levitt @jesslevitt

When Maryam Knox, a former commander of the space vessel Hawking II, wakes up in the ship's med-bay with no memory of recent events, it's up to her to piece things together. With her crew nowhere to be found, the vessel a mangled mess and the only assistance available the ship's confused AI, Knox races the clock as she tries to figure out what befell the research expedition she was meant to lead. The story unfolds from a slow-burn start that builds to a fiery finish, with the novel becoming a true page-turner when Knox successfully contacts Nasa - because they really weren't expecting to hear from her ever again. Dane Bowman

Most local golf fans will remember early stalwarts like Bobby Locke and Gary Player, the first South Africans to win major tournaments. But the pioneers of black golf are not a common part of the national discourse, especially in the 19th hole. Cohen's intricately researched book offers rare insight into the history of black golf from even before apartheid, long before the more recent stars like Papwa Sewgolum and Vincent Tshabalala. It's a collection of gems of information. Did you know the first players of colour, who were caddies, used the reverse grip long before Sewgolum? It was the only way they could get the ball into the air using their makeshift clubs. Or that Durban-based Ramnath "Bambata" Boodhun had a brilliant short game and, even as a teenager, outplayed many visitors from upcountry? Dive in and enjoy. David Isaacson

A coming-of-gender story, a thriller addressing geopolitics and a tale of survivor's guilt set after the Korean war
Books
1 year ago

Dane Bowman, Bruce Dennill and Michele Magwood share their thoughts on this week's reads
Books
1 year ago
Next Article