They had different motives for doing what they did, but many have in common an inability to accept blame 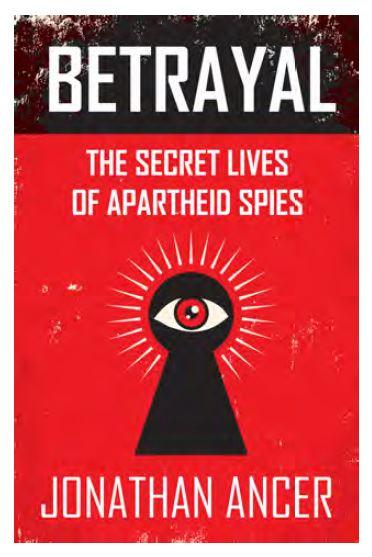 In 2017 journalist Jonathan Ancer wrote a book called Spy: Uncovering Craig Williamson in which he lifted the veil on the life, times, motivations and insecurities of the apartheid regime's most notorious agent. That experience got Ancer thinking about other apartheid-era spies and what led them to do what they did: how they managed to maintain double lives as seemingly committed anti-state activists while actually passing on information to the regime, and whether or not they now felt any remorse for their actions and the consequences of their betrayal.

The themes of betrayal, repentance and forgiveness are the driving force of Ancer's new book, which examines the cases of a dozen spies - all white - who operated predominantly in SA and spied for a variety of organisations, from the KGB to the Cuban government, the ANC and of course the apartheid security forces.

It turns out that, contrary to the image we've been fed by popular culture, spies are at base human beings with their own complex motivations, insecurities and ideologies.

But Ancer's group, while providing a range of different experiences, also display some commonalities.

Perhaps the greatest of these is their feeling of outsiderness and a burning desire to be part of a group and receive recognition for their efforts. Whether that's by rising through the ranks of the South African Navy and passing on secrets to the Soviet Union, as in the case of Dieter Gerhardt, or seeking a life of international intrigue and glamour by providing the Cuban government with intelligence (Jennifer Miles), or believing that co-operation might be easier than revealing themselves to be homosexual (Mark Behr), all of these spies seem to want to belong and be useful to one group or another.

It is easy to see the plot points and consequences of action once the murky waters of the present are distilled through the 20/20 hindsight of history, but in spite of that, many of the spies here still need to believe that even though they were puzzle pieces shifted by handlers in the service of a chess game whose ultimate goal was often unknown to them at the time, their actions were less egregious than those they betrayed would have us believe.

Olivia Forsyth, who spied on her Rhodes University colleagues and wrote a book trying to justify her actions and cleanse her moral conscience, steadfastly refuses to acknowledge that any of the information she passed on may have had any serious consequences. In typical spy fashion she has concocted a story of triple back-stabbing that tries to re-imagine her as a late convert to the politics of those she betrayed. It doesn't hold water, as Ancer shows, but that's her story and she's sticking to it because anything else would mean a fuller examination of her actions than she's willing to administer.

Behr's post-apartheid revelations of his spying while a student at Stellenbosch University caused a deep fissure among his friends and colleagues, and a psychological struggle that Behr fought until his death a few years ago. Ancer has sympathy for him but also allows for critics to put forward the reasons for their lack of forgiveness, which are hard to argue with.

For Joy Harnden who, in spite of warnings from the ANC, was protected from accusations of spying by activists like Sheena Duncan and Sheila Weinberg, who Harnden counted as true friends, the guilt and regret for her actions still punishes her on a daily basis. Perhaps, even for her harshest enemies, that is some small justice.

Ultimately the stories of the spies that Ancer has painstakingly researched and pursued here are a timely reminder of how politically charged times, personal insecurities and moral righteousness intersect in the figure of the spy, who, as a result of living a life in the sticky space between truth and lies, inevitably ends up being the last person you should trust.

"You have to let them into your confidence and let your guard down to get into their world. How do you betray them?"
Books
1 year ago

In this extract from his book Betrayal: The Secret Lives of Apartheid Spies, Jonathan Ancer tells how Dieter Felix Gerhardt and his wife Ruth were ...
Opinion & Analysis
1 year ago

No thaw in the chilly world of spies

South Africa has its own history of audacious secret agents, femmes fatales and political assassins
News
3 years ago
Next Article