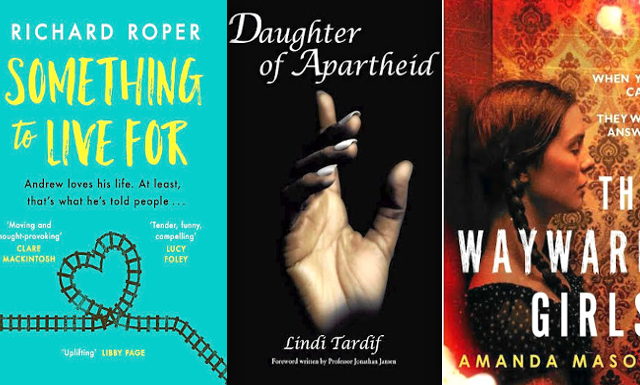 'Something to Live For', 'Daughter of Apartheid', 'The Wayward Girls'.
Image: Supplied

Something to Live For ***
Richard Roper
Orion, R320

In 1984, the UK passed an act that stipulated that local authorities must see to the funeral arrangements of any deceased where no friends or family can be found. This intriguing and unique occupation is the life of Andrew, our main character, a quirky model-train enthusiast, whose little white lie takes on a life of its own. Saving both the book and Andrew from utter bleakness is the spirited Peggy, who adds both a comedic and sanguine touch. Tiah Beautement @ms_tiahmarie

Born and raised in Soweto during apartheid, Tardif tells how gruesome events shaped her life and made her the person she is today - being harassed as a young girl by thugs in her neighbourhood, how she didn't know her grandfather because he was in exile, and how she dealt with her father's death after mystery shrouded his murder. In this short and memorable read, Tardif writes with such searing honesty and humility about her life that in the foreword Jonathan Jansen remarks: "It is seldom that a new author writes with such fluency and insight on a complex and devastating phenomenon like apartheid." He is right. The book, although filled with painful memories and horrific encounters, is ultimately about hope. Jessica Levitt @jesslevitt

Mason's ghost story burrows into the subconscious. Set in the eerie Yorkshire moors in the late 1970s, it is a haunted-house tale of a broken-down farm where a family is taunted by a ghost, who has focused its energy on the two sisters, Loo and Bee. They are being studied by paranormal professor Michael Warren and his student Simon. Fast-forward to now, when Loo (Lucy) is coerced to go back to the farm to help new students complete Warren's work. Mason expertly writes jump scares alongside a beautiful story about sisterhood. Perfect for a cosy Halloween read. Jennifer Platt @Jenniferdplatt

A gritty police procedural set in Joburg, a riveting space thriller, and a thoroughly researched book on the history of black golf in Southern Africa
Books
2 years ago

A coming-of-gender story, a thriller addressing geopolitics and a tale of survivor's guilt set after the Korean war
Books
2 years ago