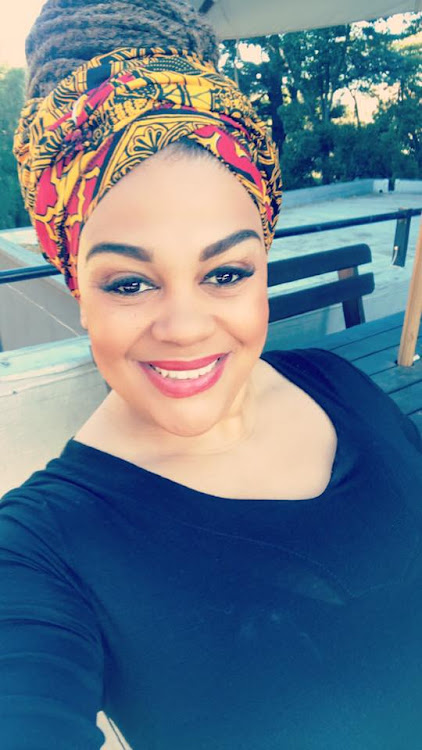 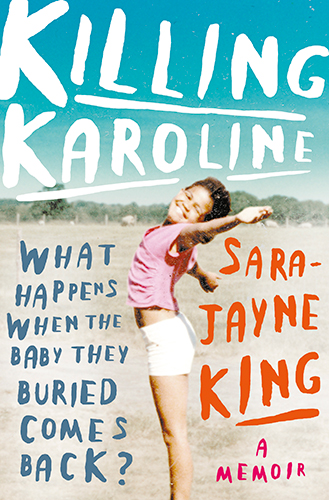 A 'misery memoir' this ain't

Sara-Jayne King lights a cigarette and slowly exhales while she considers whether Sisonke Msimang's advice to fledgling memoir authors - to "write from your scars, not from your wounds" - resonates with her.

"100%," the first-time memoirist responds in her erudite British accent.

"Sometimes it's difficult not to write from your wounds; some of that is written from wounds, stuff that's still raw," she adds.

South African audiences will recognise King from her CapeTalk show, her lit Twitter account, and, more recently, the publication of her revelatory memoir, Killing Karoline.

Prior to establishing herself as A Name on the local media scene, King's life was one of alienation, addiction, self-harm and a sense of identity loss.

Born to a white woman and a black man in Johannesburg in 1980, "Karoline" was classified as "white" by the apartheid regime's population registration act. Several days after her birth the truth behind her parentage was exposed, with her mother, Kris, ultimately deciding on sequestering her in the UK.

Kris left the country with six-week-old Karoline under the ruse of the infant having to receive medical treatment in England. Upon returning to SA, she told family and friends  Karoline had succumbed to her supposed illness.

Karoline was adopted by a white middle-class British couple and renamed Sarah Jane (which King changed to Sara-Jayne in an attempt to regain her own sense of identity).

Having spent her formative years in Surrey, King was often reminded - both overtly and subtly - of how "different" she was to those around her and found solace in substance abuse and self-harm.

"People don't want to read your unadulterated misery," King says with a slight eye roll. "As much as writing is a catharsis, you still want to sell books," she impishly grins.

The working title, Truth Hurts, is an apt one as the book contains "truth about race, sex, addiction, mental health".

"I'm a lot older now. Karoline did a thing and it was great. I feel more objective with this."

King did contemplate writing a fictionalised account of her past, but "Melinda [Ferguson] would refuse to publish it".

Ferguson, a recovered heroin addict whose memoir Smacked chronicles her years of substance abuse, founded MFBooks Joburg in the mid 2010s and specialises in autobiographical writing.

"Was it hard to be honest?" King breathes out heavily as she repeats the question to herself.

"When I was talking about myself, it was very easy to be honest," she responds.

She attributes the fairly easier aspect of - honestly - writing about herself to the past 13 years she's spent in recovery.

"So much of recovery is based around truth and honesty. That's the whole point. You can't have recovery without getting real."

Candidly (not honestly, per se) writing about others proved a far more challenging task.

'What will they think?' was a question King grappled with throughout penning Killing Karoline.

"I was more worried about making people angry. Let's say, for example, my adoptive mum - I didn't want to hurt her. I'm sure some of it did hurt her. I knew she'd be okay."

Her demeanour shifts from fondness to near-animosity as she discusses the complex nature of the omnipresent question about whether her words will cause those closest to her pain when the topic of her biological mother arises.

"I don't know if she's got the capability to be hurt."

King purses her lips, shakes another cigarette from its packet.

"She's definitely got the capability to be angry," she says, while steadily exhaling.

"That scared me. There's a part of me that's scared of her."

As for whether her biological mum has reached out to her ...

"Nothing," King shakes her head.

"The way I think of her - on her deathbed, maybe she'll think 'I wish I'd reached out'. She doesn't come across well in the book.

"Not that we're characters," she indicates with her cigarette, "but if it were a fiction piece, she wouldn't have been a liked character."

King discloses that readers have shared their "hatred for this woman" with her. "It's powerful stuff," she says, her eyebrows slightly raised.

"Everyone's entitled to their opinion. None of us knew her. That's what's interesting."

A Makwala by any other moniker

Mzansi's Queen of Twitterati made the most of cyberspace's favourite blue avian in seeking her biological father.

She admits to feeling "so guilty" after mentioning her dad's real name during one of her slots on CapeTalk.

"But I gave the name and Black Twitter galvanised! It did its thing and I found him. It was incredible," she smiles.

King's biological dad's surname is Makwala and she acknowledges that she is willing to brave home affairs and an Afrikaans woman coughing in her face (#RelatableContent) to change her surname.

King - haltingly - adds: "This is a rather cynical way of looking at it, but the 'Sara-Jayne King' brand is a thing. "

She bites her lip before voicing the possible structure of her new surname in a puzzling tone.

One thing she is certain about is her dad's wish for her to be known as a Makwala.

All happy families are alike ...

After a long pause, King concedes that her concept of 'family' can be described as "acceptance".

She lights another cigarette.

"I've got such a vast family, if you think about it. Meeting my dad solidified what family meant for me. It's acceptance.

"There was no shame, no 'please don't tell anyone," King continues in a faux plea.

"I have two brothers and a sister from my dad and we are all very close. It's beautiful. I went to Jo'burg for Christmas and hung out with them. It was the longest time we hung out since we've met. It was so normal and natural. It was just like siblings hanging out.

"With Alex, my half-brother from my biological mother's side, We had a relationship for 10 years. It never felt comfortable. It always felt as if something wasn't quite there."

Despite this incongruity she maintains they were "very close" until he committed suicide when he was in his early 20s.

"That's my family. I've had issues with my mum over the years, but she's still my mum. She's the only mum I've ever known."

King was subjected to subtle reminders that she was "different" to her adoptive family and recounts a glib remark made by her gran during the 1988 summer Olympics:

One day, when I am eight, we watch the summer Olympics taking place in Seoul ... The presenter announces the next event, in which a man named Peter Elliot is running the 1500 metres for Great Britain. As Elliot and the rest of the competitors (including a black runner from Kenya) crouch at the starting line, Granny turns to me and says, 'I'll cheer for Britain, you cheer for Africa'. For a reason I do not understand at the time, I am hit by a feeling of loss and also panic.

"That exact example cut me to my core," King grimaces. "It was almost a reminder that 'you're not really part of this family'. She never would have meant it like that because she loved us ...

"It was just a reminder in my seven, eight, nine-year-old brain of  'I'm not from where you're all from'. I don't have the Middleton nose - as I write in the book," she laughs.

Her grandfather introducing her to friends as "my adopted granddaughter'" was equally biting, she admits.

"That was hard. He didn't mean it to be alienating or othering but it was the effect it had"

"Many, many, many times," King responds in answer to if she ever felt too overwhelmed while writing Killing Karoline.

"Many times," she repeats.

"This is why Melinda is such a fantastic publisher - from a personal point of view.

"She understands all these facets of 'I don't want to upset so-and-so', 'what if they get angry?', 'this is too hard for me'. She gets all of that.

"Whenever I'd go to her and say I'm really struggling, she would get where I was.

"She'd either say 'just keep writing' or 'take a break'."

King was especially concerned about her family's response to the book.

Melinda's solution?: "Write as if they're dead."

Could anyone besides Melinda do the book justice?

"The fact that I knew I could trust her as a friend, that she knew when I was struggling."

Sshe could always rely on Melinda to encourage her,  to listen  when "hectic stuff happens".

Melinda also knows how to keep the haters at bay...

King maintains that whenever she's approached by readers who accuse her of still being "really bitter", Melinda claps back with a solid "just ignore them".

"She's good at dealing with that."

Now, we all mos know that 'memoir' is derived from the French word for 'memory' (mémoire, ma chéries) and Ms King has a photographic one at that.

Within Killing Karoline she recounts memories from as young as two.

"Isn't that hectic," she laughs  as she struggles to light another cigarette.

"I first realised I had a photographic memory at varsity."

Despite being "drunk for most of the time", King could remember "stuff that was said in lectures" verbatim. (She studied law before replacing court robes with radio broadcasting).

"When they say 'photographic memory' it literally is ..." she pauses, then describes how she could remember whole legal precedents.

"I'd pull that out of my arsehole in the middle of an exam I hadn't studied for, probably hungover.

"Also, the process of writing memoir, the more you trigger, the more comes out.

"My mum said to me - the only things she said about the book - is 'you've got a fantastic memory'."

The past remains present

"I never feel more British than South African when I think about this issue," King resolutely affirms in response to whether she believes  race relations have truly changed since the advent of democracy.

"I didn't know South Africa pre-democracy. I didn't know what it was like. I have a pretty good idea, but I don't think I'll ever know the true horror."

Despite never having been subjected to the true horror of apartheid, she was exposed to the toxic remnants when she first returned to South Africa.

"I was literally agog by conversations."

She recounts how she was home "literally just the other day" and a friend of a friend came around.

"Just because you've legislated against a certain behaviour doesn't mean that it's not still present. You only need to look at this lack of economic freedom, disparity between the haves and the have-nots in South Africa."

She stubs out her cigarette and says race remains a pressing issue, citing the concept of interracial couples and bi-racial children still considered "strange" by certain South Africans.

"Race is still a big thing."

'Zephany' is a story of what it means to love and be loved, and of claiming your identity.
Books
2 years ago

'Always Another Country': memoir of a bittersweet homecoming after exile

Years after being known only as 'Yellow', Thuli Nhlapo confronts her mother about her real father and real surname

"I hated being pregnant with you. I used to cry the whole day. I hated carrying you in my stomach."
Books
2 years ago